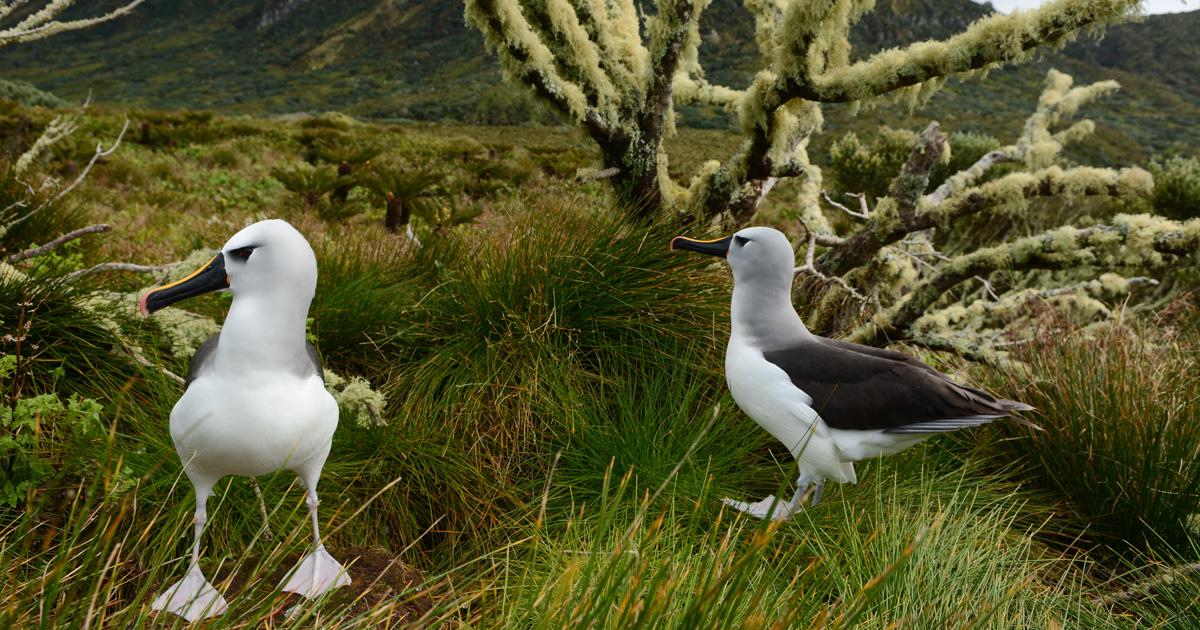 Anyone who follows the story of Gough Island will know that 2 million seabird chicks are tragically lost from Gough every year due to the invasive non-native species of house mice that have inhabited this remote island.

This new estimate of the number of chicks that are lost each year was only released a few months ago. The news reaffirmed the importance and urgency of the Gough Island Restoration, which, with your support, plans to save these species by eradicating mice from Gough Island in 2020.

Marion Island, similarly to Gough, is a sub-Antarctic island where invasive non-native mice are threatening the island’s large numbers of breeding seabirds.

Today we share another worrying new development that could further accelerate these seabirds’ decline; there is evidence that mice may have begun to prey upon adult seabirds on both Gough and Marion Island. This behavior has only been recorded once before, on Midway Atoll in Hawaii – where the US Fish and Wildlife Service and partners are exploring potential solutions to prevent mouse attacks, including an eradication.

**Warning: this blog contains images of wounds found on seabirds, including scalping**

What would this mean for seabirds?

Albatrosses and Giant Petrels are very long-lived birds, and routinely reach 50-70 years old. They do not start breeding until they are 7-12 years old, and most birds die before they are old enough to breed. The breeding adults on Gough and Marion are therefore the elite birds, those that survived the harsh weather and ferocious storms of the Southern Ocean for >10 years to grow up and start breeding. During their long lifespan they are also able to raise dozens of chicks because they can breed for 30 years or more. Losing one of those precious adult birds to mice is therefore many times worse than losing the chicks.

While it is very disconcerting that mice attack and kill seabird chicks on both islands, the death of adults is far more severe in terms of the future of a species. If mice have learned to attack adult albatrosses and petrels and if mice are able to kill these adult seabirds, population declines will accelerate dramatically.

The situation for seabirds on these two islands is dire and could get worse still. Since the early 2000’s when mouse predation on chicks was first suspected on both islands, we’ve seen haunting footage showing mice scalping chicks (a novel behaviour that rapidly spread in pockets around Marion island) and estimates of total chicks lost to mice has now increased to millions each year. Mice are extremely opportunistic and have very short generation times (the time between two consecutive generations), which means that changes in behaviour will very rapidly spread through an island population. We must act now to save these seabirds before mice begin to routinely kill adult birds and push species ever closer to extinction.

1. In 2017, myself and Michelle were working on Marion Island and reported a Northern giant petrel with wounds on both flanks under the wings that were consistent with mouse predation. Sadly, the following day the male’s nest was found abandoned and his nesting attempt failed that season. The male was first ringed as a chick in 1995 and until 2017, had successfully fledged six chicks with the same partner.

A high proportion of Northern giant petrel nests in the immediate vicinity around the depredated nest also had failed breeding attempts – suggesting mice were very active in this area. Within 500m of the wounded petrels’ nest just 18% of nests managed to raise a fledgling. Move to beyond 500m, away from where we think mice are very active, and the success rate was substantially higher, with 71% of nests successfully rearing a chick. It is not clear whether mice are able to kill adult giant petrels, but this evidence suggests that mice can severely affect chick survival as mice force more adults to abandon their nests.

2. In early 2018 it was the then Gough Island team who found an adult male Tristan albatross incubating an egg with a 4cm wound on his rump. Thankfully the egg hatched, he was seen several weeks later feeding his chick and the wound showed signs of healing.

3. The final observation was on Gough Island’s Atlantic yellow-nosed albatross in October of 2018. Initially a single adult was found with a small wound on its back, consistent with a mouse attack. During the annual incubation count, 23 freshly deceased Atlantic yellow-nosed albatrosses were found in nearby colonies to the wounded albatross. Each of the 23 birds were found next to nests, now empty of their precious eggs.

We hope to be able to confirm our observations with video evidence from nests, however, this will only be possible during the next breeding season.

How we’ll save seabirds

With two Critically Endangered and four Endangered seabirds already on Gough Island we cannot afford to see population declines increase through mouse predation on adult seabirds as well as chicks. In 2020 we will go to Gough Island to eradicate mice. If successful, the project will stop all mouse predation on Gough Island, and we should see seabird breeding success increase the very next breeding season after the eradication. There is potential for spectacular outcomes, but we cannot do this alone. We need your support to make the project a success.

If you would like to support the Gough Island Restoration and help save some of the world’s most threatened seabirds, please donate today via our website www.goughisland.com.

On Marion Island, several seabird species are also becoming increasingly threatened by the impacts of invasive non-native mice. BirdLife South Africa in a collaborative effort, with the FitzPatrick Institute of African Ornithology and the South African Department of Environmental Affairs, are planning towards a mouse eradication set to happen in 2021. This project also requires a tremendous amount of support, if you would like to find out how you can aid the cause, please visit www.mousefreemarion.org.za, or the Mouse Free Marion Facebook and Instagram pages.

Acknowledgement The Gough Island Restoration Programme is being carried out by the RSPB in partnership with Tristan da Cunha , BirdLife South Africa and the Department of Environmental Affairs in South Africa and Island Conservation . The programme is part-funded by the RSPB, the UK Government, the National Fish and Wildlife Foundation and other generous individuals and organisations.