New research explores just how strong a Coconut Crabs pinch can be, but there is so much more to understand about these vibrant animals.

The Coconut Crab is a unique and beautiful creature found on islands throughout the Indo-Pacific. This vibrant species is the largest hermit crab in the world–measuring up to 18 inches long and weighing up to 9 pounds. Researchers have recently discovered that along with its size comes immense strength. In this recent study from PLOS One, the researchers used a metal bar that could measure the amount of force generated from a Coconut Crab’s pinch.

The force is remarkably strong, study author Shin-ichiro Oka, a zoological researcher at Japan’s Okinawa Churashima Research Center explained. The range of their relative pinching force was greater than the maximum force of any animals within their body-size range.

Although the highest force measured was already an impressive 400 pounds, the force of each crush was correlated with body size to determine the maximum force a coconut crab could use. This number was even more impressive: 740 pounds! The researchers explained that if human hands had the same strength, a person could exert six tons of crushing force. This amount of force from a coconut crab is comparable to that of a lion’s bite. 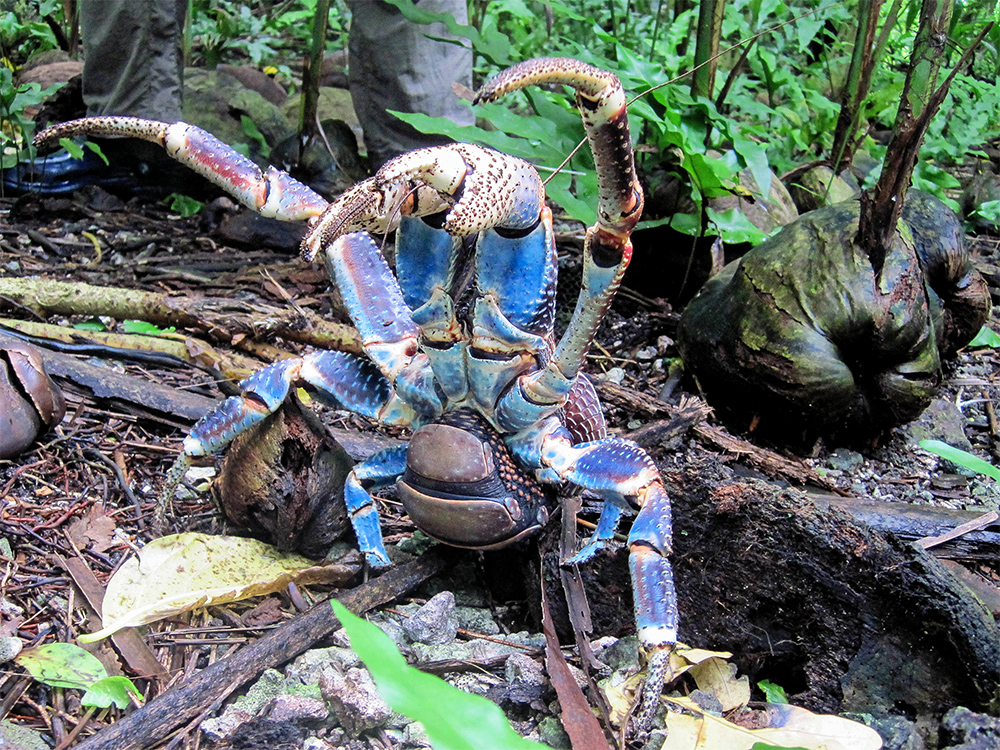 The Coconut Crab is an intimidating crustacean. Credit: Island Conservation

However, the groundbreaking research is not over. Researchers say there is still more work to be done. Although these crabs have always inspired scientific questions, there is very little known about them. The researchers could not conclusively explain why the species would need such strength but provided a potential suggestion:

They have no shell to protect from their enemies, so the powerful claw and large body would be useful as a weapon to protect themselves.

These powerful creatures can be found on tropical islands around the world including Palmyra Atoll. Invasive rats were observed attacking juvenile or molting crabs, but now the atoll is rat-free and the ecosystem is thriving.

So, if you ever find yourself on an island with a coconut crab–watch out for your hands!