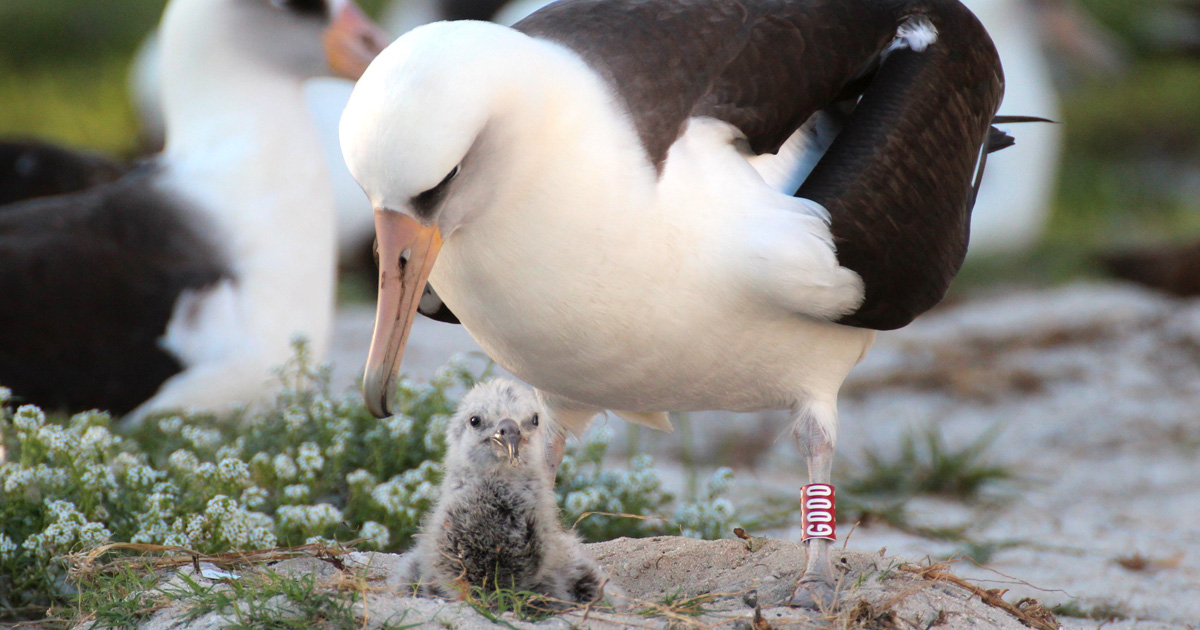 This article was originally printed by: US Fish and Wildlife Service Pacific

She first appeared back at her traditional nest site on November 29 and biologists on Midway have confirmed that she has laid an egg. Wisdom was first banded as an adult in 1956, and although she is at least 68 years old, she is still laying eggs and raising chicks.

Wisdom and her mate Akeakamai return to the same nest site on Midway Atoll each year. Albatross often take time off to rest between egg-laying years, but the pair have met on Midway to lay and hatch an egg every year since 2006. 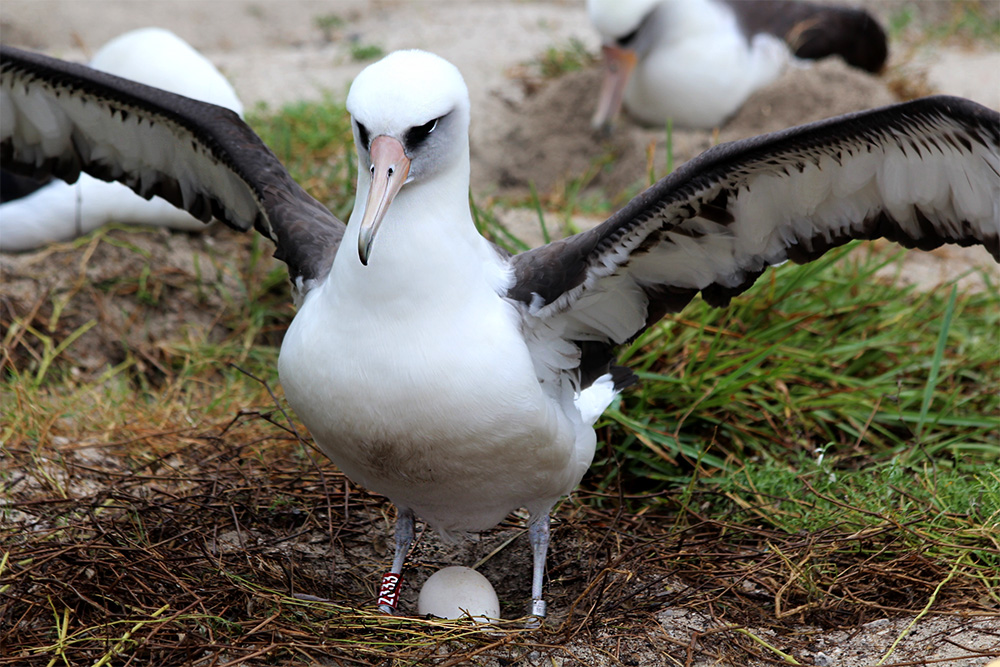 Wisdom spends 90% of her life at sea where she soars over the ocean for days on end and rests on the waves to feed on squid and fish eggs. Like all albatross, she returns nearly every year to the place she was born.  For Wisdom, and over a million other Laysan albatross, that place is Midway Atoll National Wildlife Refuge and Battle of Midway National Memorial. Biologists call this type of behavior “nest site fidelity,” and it makes preserving places with large colonies of birds critically important for the future survival of seabirds like Wisdom.

A Chance Encounter in a Historic Location

Wisdom was first banded during a bird survey in 1956 by a biologist named Chandler Robbins. At the time, Midway Island was a strategic outpost for the U.S. Navy and Wisdom was banded at her nest next to one of the barracks.

That year was Chandler Robbins’ first season on Midway Atoll where he was studying the albatross colony. At the time, Wisdom wasn’t particularly special, she wasn’t even Wisdom. She was just one of the hundreds of thousands of returning to Midway and one of 8,400 albatross that were banded that year. 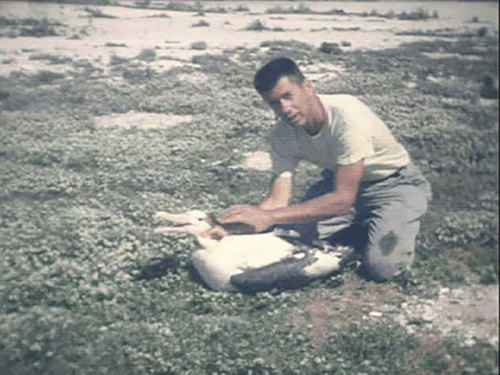 In a strange twist of fate, it was Robbins himself who“rediscovered” Wisdom 46 years later during a survey near the same nesting location. As he recorded her band number, he noticed that he had been the original recorder all those years ago during his first season on Midway.

In the past, many albatross were banded with aluminum bands that sometimes became corroded by sand and salt water. These early bands would often fall off in 20 years or less. Wisdom’s bands, fortunately, were continuously replaced and because of meticulous record keeping associated with bird banding on Midway, biologists were able to confirm that she is the same bird first banded by Robbins. Biologists may find even older birds as old worn bands continue to be routinely replaced. 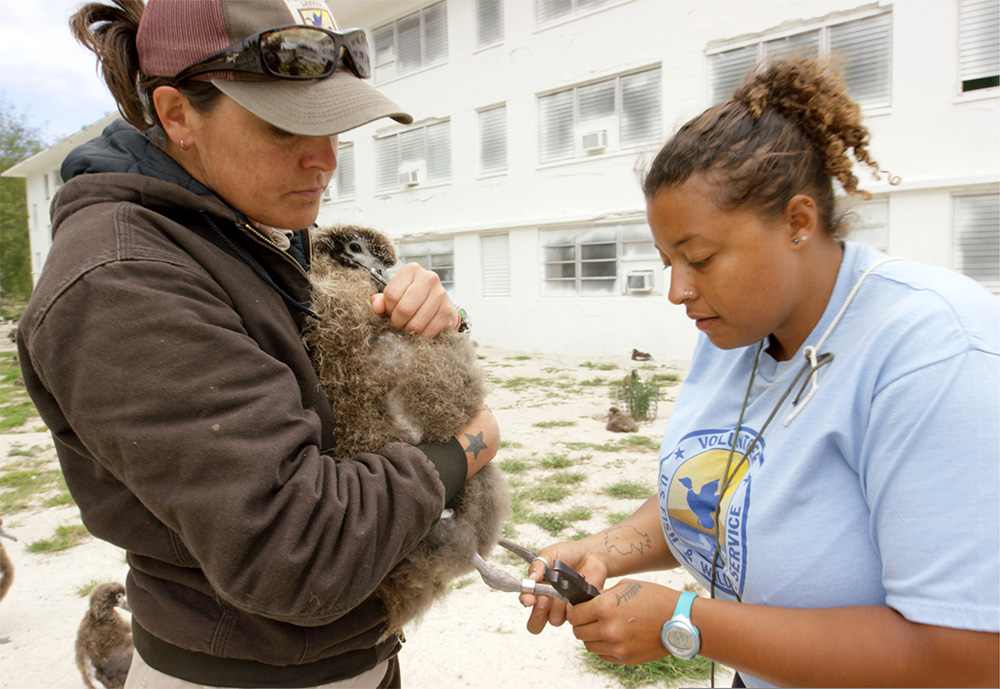 Albatross were first banded on Midway in 1936 and to date over 250,000 have been banded here. Bird surveys and banding projects have long helped scientists understand the complex life cycles and migration patterns of birds across the globe. By pairing modern data analysis with detailed current and historical records, we can better understand the migratory paths of millions of birds and spot changes in those patterns. This information helps scientists make better management decisions that ensure seabirds have the habitat and resources they need in the future.

A Refuge at Sea

Midway is made up of two flat sandy islands ringed by turquoise waters and a spectacular coral reef. The islands and the massive seabird colony of over 3 million birds that rely on them sit in the middle of the Pacific Ocean inside one of the world’s largest protected areas, Papahānaumokuākea Marine National Monument.

“Midway during nesting season is an overwhelming experience,” said Beth Flint, Wildlife Biologist with the U. S. Fish and Wildlife Service. “You are bombarded by the sounds and smells of 1.2 million albatross and over three million seabirds. Every square foot of land and much of the ground underfoot is occupied by a nesting bird. Itʻs like another world.” 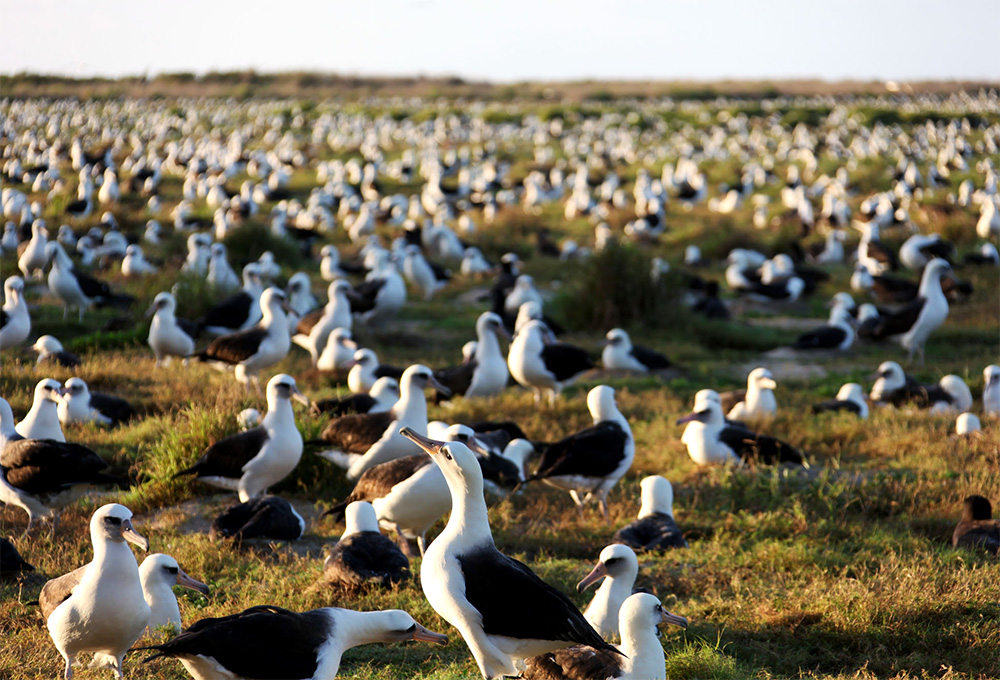 From October to December, Albatrosses return and descend upon the island transforming the landscape into a sea of birds. Photo credit: USFWS.

“Laysan albatross and other seabirds depend on the habitat protected by Midway Atoll and other Pacific remote wildlife refuges to raise their young,” said Peyton. “Thanks to the hard work of our volunteers, we have been able restore the native habitat that the birds need for nesting sites, ensuring a future for these seabirds.”

Biologists with the Fish and Wildlife Service are working to restore the habitat seabirds need at Midway Atoll and throughout the Pacific and remove threats like invasive predators – because protecting the future for seabirds mean protecting the places they call home.

Raising the next generation of albatross is no easy job. Albatross lay a single egg and incubate it for a little over two months.  After the chick hatches, it will still be another five months before it will leave the nest. 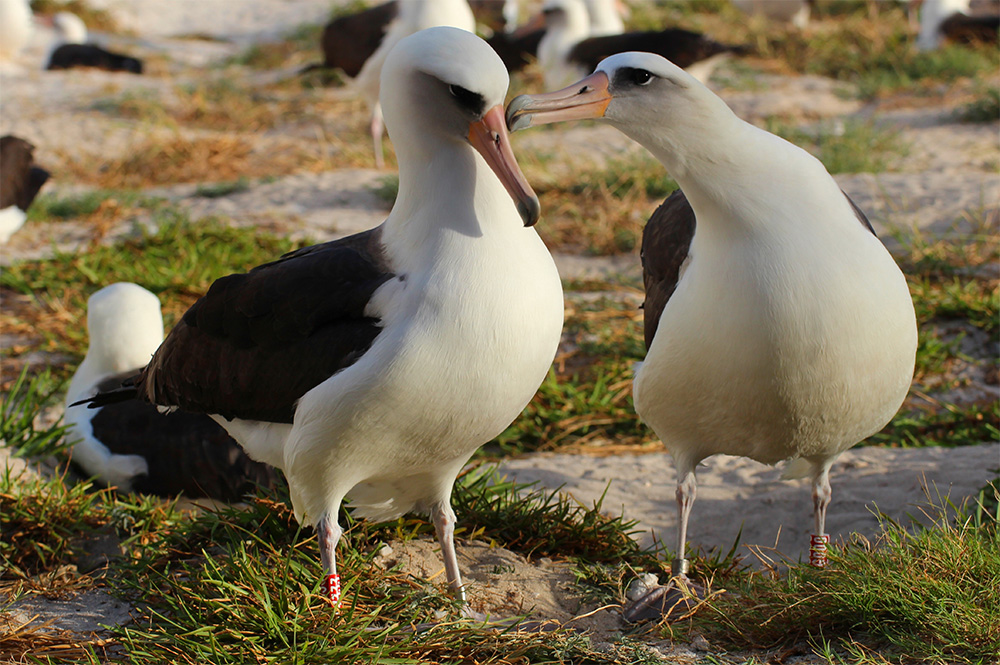 Wisdom and her mate, Akeakamai whose name means “love of wisdom” have returned every year since 2006 to hatch a chick. Credit: USFWS

In that time, albatross parents like Wisdom and her mate Akeakamai, take turns incubating the egg or caring for the chick while the other forages for food at sea. They will spend approximately seven months on Midway Atoll incubating and raising their chick. When not on parenting duty, Wisdom and Akeakamai take off to forage for food. Because this process takes up so much time and energy, most Laysan albatross don’t lay an egg every year.

Starting around age five, juvenile albatross begin the process of finding a mate. During nesting season, juvenile albatross can be found all over Midway Atoll practicing elaborate courtship dances that dozens of ritualized movements. They are looking for just that special bird to dip, bow, and preen with, and once a pair bond forms they stay bonded for life.

In 2017,  the chick that Wisdom fledged in 2001 was observed just a few feet away from her current nest, marking the first time a returning chick of hers has been documented. “Midway Atoll’s habitat doesn’t just contain millions of birds, it contains countless generations and families of albatrosses,” said Kelly Goodale, U.S. Fish and Wildlife Service Refuge Biologist. “If you can imagine when Wisdom returns home she is likely surrounded by what were once her chicks and potentially their chicks. What a family reunion!”

Featured photo: Wisdom’s mate,  Akeakamai with one of their chicks in 2016. Credit: Kiah Walker/USFWS Volunteer