Hawai’i’s Scarlet Honeycreeper, also known as the ‘I’iwi was once one of the most common species found throughout native ʻŌhiʻa forests, but converging threats have led to dramatic declines in its population. After years of research, the ‘I’iwi has officially been listed under the Endangered Species Act. Listing the ‘I’iwi will also benefit other native Hawaiian birds which share similar habitat and face the same challenges.

A combination of factors is responsible for the decline in the ‘I’iwi population. One part of the problem is a loss of native forests due to development and human use. Another issue is the presence of invasive feral pigs, which contribute to habitat loss by digging up native plants, a behavior that also results in ample habitat for mosquitoes to breed. The presence of mosquitoes has led to the spread of avian malaria, which has harmed Hawaiian Honeycreepers and the ‘I’iwi in particular. 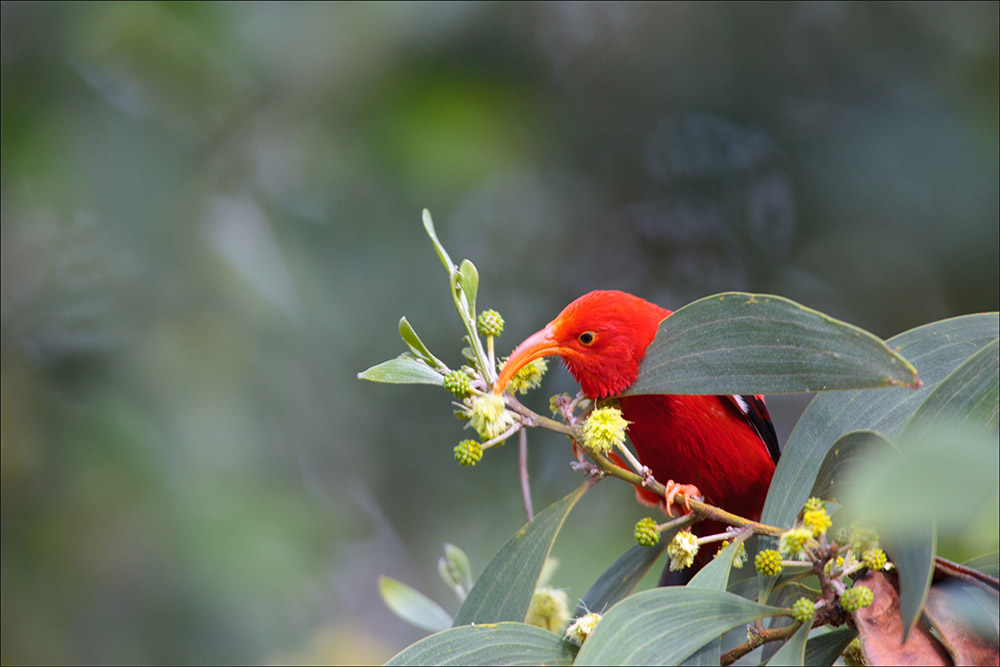 An ‘I’iwi foraging. Credit: US Fish and Wildlife Service

After exhaustive research into these reasons for decline, the US Fish and Wildlife Service has determined that the species needs further conservation efforts. Currently, 90% of the I’iwi population lives within a small patch of Eastern Maui forest. Although the ’I’iwi population is the target of future conservation efforts, protections that will be put in place to aid the species will also benefit other native Hawaiian species. Mary Abrams, project leader for the Service’s Pacific Islands Fish and Wildlife Office commented:

In recent years, the ‘I‘iwi population has been in sharp decline due to threats from habitat loss, invasive species and avian diseases, particularly avian malaria. These threats have affected all forest birds, not just the ‘I‘iwi. Conservation that benefits the ‘I‘iwi will undoubtedly benefit other Hawaiian forest birds.

Listing the species under the Endangered Species Act will give the ‘I’iwi key protections. A recovery plan will be created in order to establish the best course of action for conservation efforts. Addressing the major issues that the ‘I’iwi faces will not only help this rare bird, but also other native Hawaiian species. Hopefully, the Scarlet Honeycreeper will one day thrive again in the forests of Hawai’i.