Researchers are working to teach captive-bred Hawaiian Crows predator avoidance skills to prepare them for return to the wild.

Last December, five male Hawaiian Crows (Corvus hawaiiensis), also known as Alalā, were released into the wild at Pu‘u Maka‘ala Natural Area Reserve in Hawaii. This release marked the first time individuals had been in the wild since 2002, when a captive breeding program was initiated to protect the crows from invasive species such as rats and mongoose. 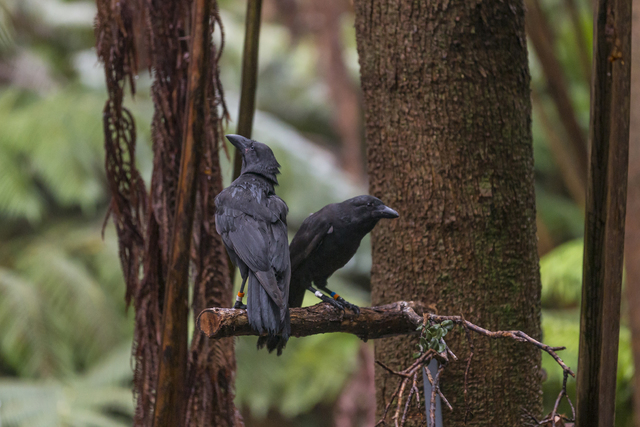 Following the release, the five birds were initially thriving in the wild. Not much later, however, two individuals were found dead. This discovery triggered conservationists to recapture and return the remainint individuals to captivity. Results from the necropsies of the birds showed that they died due to predation from the Hawaiian Hawk (Buteo solitarius) also known as ‘io, a natural predator that is also endangered. Another individual was found to have died due to natural circumstances.

Although the return to captivity was a setback for the program, conservationists are still working hard to implement a second release of twelve individuals. Researchers are working with the captive animals to teach them predator avoidance tactics in order to minimize the impact of natural predation. The statement released by Hawaii’s Department of Land and Natural Resources explained:

Biologists around the world say releases like this are usually marked with fits and starts, and that reintroduction success is not usually seen before multiple releases.

The Extinct-in-the-wild Hawaiian Crows have a long road to recovery, but due to the efforts of dedicated researchers, there is hope that one day they will thrive in their native, wild habitat.