Five male Hawaiian Crows, also known as  Alalā, were released from captivity into the Pu‘u Maka‘ala Natural Area Reserve in December. This was part of a recovery program that was 15 years in the making to return the native Hawaiian crow to its natural habit where it has not been seen since 2002. The goal was to downlist the crow from Extinct-in-the-wild to Critically Endangered.

Initially the five birds were observed to be doing well, but two and a half weeks after the initial release three of them were found dead. The San Diego Zoo and their partners immediately captured the remaining two birds and returned them to captivity to await the necropsy results. John Vetter, a wildlife biologist with the Department of Land and Natural Resource’s Division of Forestry and Wildlife explained:

Some level of mortality is to be expected when reintroducing a species back into the wild and we were prepared for that possibility…The initial days of release are always the most difficult stage of any release program, and the level of uncertainty is also highest with the first release cohort.

Capturing the remaining two birds gives biologists the chance to evaluate what went wrong and decide how to remediate the problem. Steps like these are important for the long term success of the project, and the eventual release of more Hawaiian Crows. 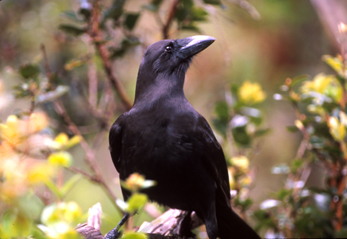 The Hawaiian Crow is a beloved species throughout Hawaii and around the world explained Bryce Masuda, conservation program manager of the Hawaii Endangered Bird Conservation Program:

The loss of these three birds is difficult for the entire community, including the many people who have cared for these birds since their hatch and have worked steadfastly to prepare for their release…Condolences for this loss have come from around the world.

Although the loss of these three individuals is disheartening, there is still hope that future releases will have more success and that the Hawaiian Crow will someday no longer be Extinct-in-the-wild.