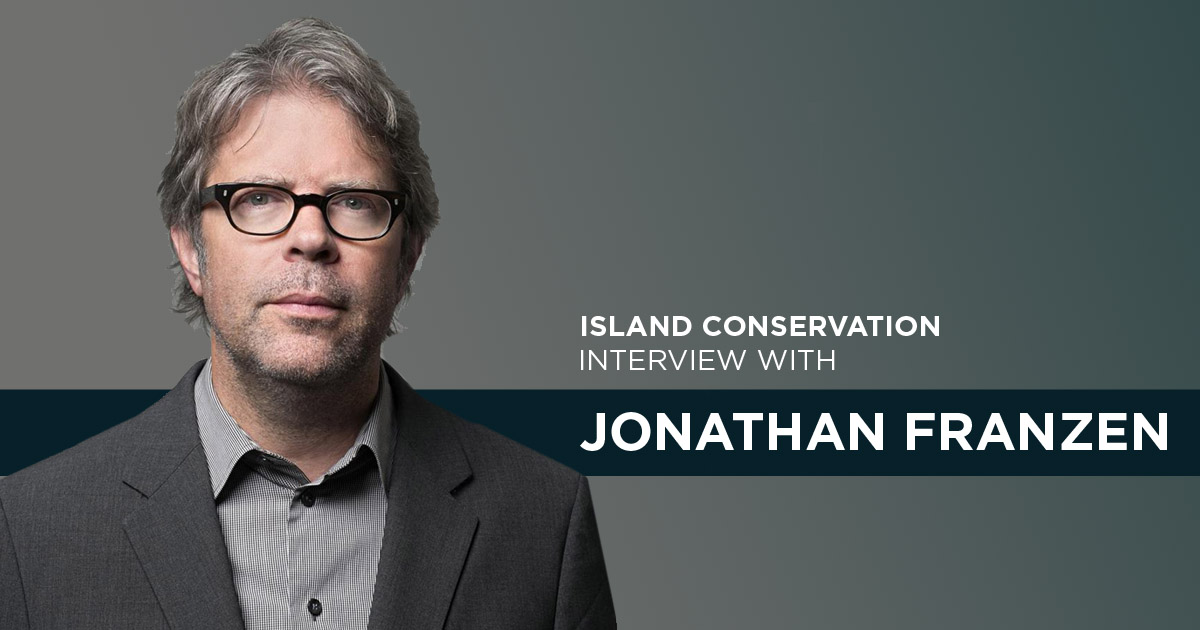 You just published a book of essays titled The End of the End of the Earth, in which you suggest that the essay is perhaps more important now than ever. Why is that?

The essay about essays grew out of the introduction I wrote for The Best American Essays in 2016. When you’re the editor of that anthology, you get a big stack of most of the good essays that were published in a given year in the U.S. You see a quality of thought, a quality of essential kindness, a certain kind of distance on oneself, an effort to really think things through, that is strikingly different from most of the writing you find when you poke around online. It’s heartening to see that real essays are still being written, that people still care enough about the form to do that. It is, of course, not heartening that more people aren’t reading them.

You are a vocal supporter of Island Conservation, which even makes a cameo in a couple of your essays. Why is island restoration so important?

I have a particular affection for seabirds, and it happens that most of the work that Island Conservation does benefits seabirds. It’s so rare in conservation efforts that you can have 100 percent victories. If you’re trying to save the sage-grouse, which God bless those who are—and that includes American Bird Conservancy, Wild Earth Guardians, the Sierra Club—it’s such a tough battle with so many fronts, and it will never end. Whereas, your island has a problem with rats? Do a good job of baiting them, and you can walk away, the job is done. All that’s left is some attention to biosecurity, to make sure the rats don’t come back. And in the world of conservation, that’s really rare— to see complete, lasting, inexpensive-to-maintain results.

That article in New York magazine “The Uninhabitable Earth” by David Wallace-Wells detailing the impacts of climate change was tough to read. In one of the essays in your new book you say, love is a better motivator than guilt. So how do you take that “Doomsday” report, and find a love motivator to inspire action instead of guilt?

Most climate activism has appealed to people’s guilt and fear. Maybe that was the only way to go about it, but this kind of activism has failed to change the way the world works. Now that calamitous climate change is certain to happen, there is even more guilt and fear to appeal to, but the actions that these emotions might motivate will no longer prevent calamity. If we keep pressing the fear and guilt buttons, people will just stop caring about the natural world entirely. So now, more than ever, we need to rely on a different kind of motivation. Smaller and very meaningful conservation victories can still be achieved in our lifetimes if people can be moved to care about species and places that are threatened. And what’s most likely to move people is love of those species and places.

One of the many reasons I like Island Conservation is that you’re working in out of the way places. Islands have taken it on the chin in terms of extinctions, they’ve been some of the biggest conservation disasters, but it’s possible that, if things really start falling apart, islands could start functioning the way we imagine islands functioning: as havens. This is particularly true in more southerly and northerly places. I don’t think all sub-Antarctic seabirds are going to disappear. I think you could raise the temperature by 6 degrees Celsius, and many species would be severely impacted, because of the depletion of fish stock and invertebrates in the ocean, but I think a bunch of species would hang on. The Antarctic in particular is relatively secure climatically, because of the wind systems and the ocean currents. So I think, in the Doomsday scenario, if you’re going make a conservation investment, and move people to care, islands are a great place to do it.

South Georgia, because of the scale of the undertaking with the rat eradication in terms of square miles and also the unbelievable significance of that for a whole bunch of global seabird populations. If I were making a list of all good news in the world from last year, I don’t think there was anything better than the announcement that, nope, there is no sign of any rodents on South Georgia Island. I was like, “Are you f$%king kidding me?” I wanted to do cartwheels. It’s great because you know that two years from now we’ll already see the difference in the birds’ breeding populations.

It was around the time of your mother’s death in 1999 that you started paying attention to birds. Do you think they brought you some comfort at that time?

Maybe a little bit. I did write a 12,000-word essay about it all called “My Bird Problem,” where I really get into the question of where my interest came from. But I have to say I’ve come to dread the question. I can be giving an interview with a Portuguese journalist about my new novel and, sometime in that interview, after talking about literature and politics, the journalist will inevitably ask, “How did you get into birding?” Every single interview I do on any subject. Seriously. I go on BBC and talk about the midterm elections, and just when I think we’re finished, here it comes. “One other question, Jon. I’m sorry, I know it’s off topic, but I have to ask, ‘How did you get into birds?’” Apparently it’s a lot weirder to be a bird guy than I even realized.

Are there any similarities between writing and birdwatching?

Most of the similarities are unilluminating. But I might mention my friend Todd Newberry’s adage, “It doesn’t take much to make a birder’s day.” You can go out for three hours and see nothing exciting, nothing you couldn’t have seen by staying home and sitting in your yard, and then, as you’re on your way home, you see three White-tailed Kites hovering over a field, giving their cries, and you go home happy to be a birder. My experience of writing is like that—long hours of almost pointless revision, struggle with stubbornly awkward sentences, no inspiration, no ideas, and then, in the last half hour, I’ll suddenly spit out a few sentences that feel alive, and go home happy. It doesn’t take much to make a writer’s day, either.