Palmyra Atoll is a tiny speck in the Pacific Ocean, roughly 1,000 miles south of Hawai’i and less than 3 square miles in area. Its only human inhabitants are small groups of scientists who use the island as a natural laboratory. For a long time, they endured attacks from another of Palmyra Atoll’s residents — mosquitoes. 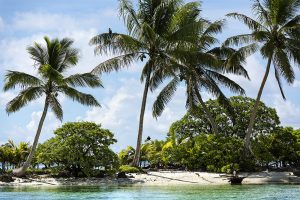 Palmyra Atoll has few inhabitants, but it is home to a wide array of wildlife. Credit: Andrew Wright

“It was really hard to do field work there during the day without getting massacred by mosquitos,” said National Science Foundation (NSF) program officer Daniel S. Gruner. While working toward his doctorate at the University of Hawai‘i, Mānoa, Gruner conducted fieldwork on the atoll in 2003, studying insects attacking native Pisonia grandis trees.

But when researchers returned years later, they realized something was missing. Hillary Young, a researcher at the University of California, Santa Barbara said:

One of the first things our team noticed was that we weren’t getting eaten alive by mosquitoes. One of the things about being out there historically was that we were constantly having to slather on repellant. We didn’t have to anymore.

Mosquitoes active at night were still there. But the daytime pest, the Asian tiger mosquito, Aedes albopictus, was gone. What changed? In 2011, the U.S. Fish and Wildlife Service, The Nature Conservancy and Island Conservation began a multi-year campaign to systematically eradicate all of Palmyra Atoll’s 40,000 rats, an invasive species and the island’s only year-round mammal inhabitants. But the mosquitoes, in theory, could have survived the disappearance of the rats. Asian tiger mosquitoes are aggressive, daytime biters that will feed on non-mammalian species, and thousands of birds — typical Aedes prey — still called Palmyra Atoll home. Young said:

We were asking, ‘Where did all the mosquitoes go?’

Young is the senior author on a new, NSF-supported paper published in Biology Letters from a research team that worked to answer that question. The research project provided training for a new generation of scientists and showed that sometimes, being in the right place at the right time can take science in unexpected directions. Gruner,  who served as a co-author in his capacity as a researcher at the University of Maryland said:

This was really serendipity. If you’re prepared for a surprise, you can take advantage.

Palmyra Atoll is now a safe haven for birds such as this Red-footed Booby. Credit: Andrew Wright

Young and Gruner didn’t go to Palmyra Atoll with any intention of studying the relationship between mosquitoes and the hosts they feed off. Like Gruner, Young, with NSF support, was studying trees and working toward her doctorate in 2010 by researching how invasive coconut palms harmed the island’s native plants. She said:

Mosquitoes were not on our radar.

Their interest in bugs was limited to investigating those that might have affected tree growth. In fact, while the researchers had collected Aedes samples from in the 2000s, that was mostly by accident. The mosquitoes were so prevalent that they were caught in traps designed for other bugs.

The researchers’ focus shifted around 2014, when they realized they could work all day with no bites. For two years, they looked for the mosquitoes, setting ten times the previous number of traps and checking in with the scientists working on the island to see if anyone had been bitten. They brought in equipment designed to catch daytime mosquitoes — traps that use scent as a lure. Nothing. That, Gruner said, was odd. Asian tiger mosquitoes aren’t native Palmyra Atoll inhabitants, but eradicating them past the point of return is incredibly difficult. He said:

These things can breed in a pool of water the size of a bottlecap.

Given the limited size and population of Palmyra Atoll, the team immediately began looking at the rat eradication as a likely factor in the mosquitoes’ disappearance.

Rise and fall of invasive species

Many of the mammals found at remote islands across the world — rats, cats, foxes — are invasive species introduced by humans, intentionally or unintentionally, over centuries of exploration and shipping. Scientists estimate that these invasive mammals have been responsible for large-scale extinctions of native birds and reptiles, with rats being the worst culprits. They can multiply into the thousands, attacking other species and choking out their food sources. To combat that damage, conservation agencies in the U.S. and other countries have worked to eradicate rats from hundreds of islands.

Rats likely first came to Palmyra Atoll during World War II, when the U.S. Navy used the island as an air base, building the runway that scientists still use today to visit. The rats preyed on fiddler crabs, coconut crabs and they ate the seeds and seedlings of native trees. 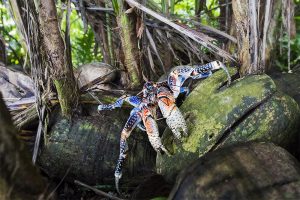 While getting rid of the rats increases the island’s value as a national wildlife refuge and a scientific research station, it shouldn’t have put an end to the mosquitoes. Aedes requires blood for food, and females need a meal in order to lay eggs. Yet, there was no shortage of blood on the atoll due to the seabirds living there. In fact, the island’s surviving mosquito species, Culex quinquefasciatus, which feeds at night, was still thriving thanks to the birds.

After consulting the scientific literature concerning Asian tiger mosquitoes, the researchers were left to conclude that the ones on Palmyra Atoll had grown specialized. Biologically, the mosquitoes were still Aedes and able to feed on non-mammalian animals, but they didn’t do so. Instead, their survival on the island depended on blood meals from rats, and the rapid elimination of their preferred food source drove them to extinction. The research paper states:

This seems to be the first documented accidental secondary extinction of a mosquito. Furthermore, it suggests that preferred host abundance can limit mosquito populations, opening new directions for controlling important disease vectors that depend on introduced species like rats.

One vital scientific resource helped them make that connection: museum archiving and curation. The researchers were able to compare their samples to those collected by Fish and Wildlife in 2002 and stored at Hawaii’s Bishop Museum, providing evidence of how the extinct mosquitoes bred. Without those samples providing a baseline of past Aedes mosquitoes on the island, the team could not have followed up on its hunch.

Young and Gruner are quick to point out, however, that the lesson from their study shouldn’t be that “get rid of the rats, and the mosquitoes disappear” applies universally. Such a strategy wouldn’t work in, say, an urban area in the mainland United States. Even if it were possible to eliminate all the rats from a city, there would still be plenty of humans and other mammals for the mosquitoes to bite.

Eradicating rats from a city might not eliminate mosquitoes, but it could possibly reduce their numbers by cutting out one source of the insects’ meals. When public policy organizations and scientists talk about mosquito prevention, Young said, host control hasn’t typically been part of the conversation.

The study now becomes another clue in the scientific community’s growing understanding of basic ecology. “It shows you have adaptations that are more specialized than you think, given what we know about a species.” Gruner said.

You have no idea how hard it is to keep electronics working in a place that gets 4.4 meters of rain a year, with critters that love to chew things.