Once a species is extinct, there’s no going back…right? Conservationists in the Galapagos are not so sure.

The highly publicized 2012 death of “Lonesome George,” the last Pinta Island native Giant Tortoise in existence, represented a major loss for conservationists and wildlife lovers. The death of Lonesome George marked the fourth extinction of fifteen distinct species of Giant Tortoise that evolved on the Galápagos Islands.

Galápagos Giant Tortoise populations began to suffer in the 19th century when pirates and whalers arrived at the islands. These seafarers collected Giant Tortoises which were consumed as food during long periods of time spent at sea. For the Giant Tortoises still on the islands, the struggle to survive worsened when sea-farers and colonists accidentally introduced invasive species such as rats. Subsequent introduction of feral cats, meant to control the rat population, only further damaged the natural ecosystem. To make matters even worse for native species, seafarers introduced goats to islands to replace the dwindling tortoise meat supply. 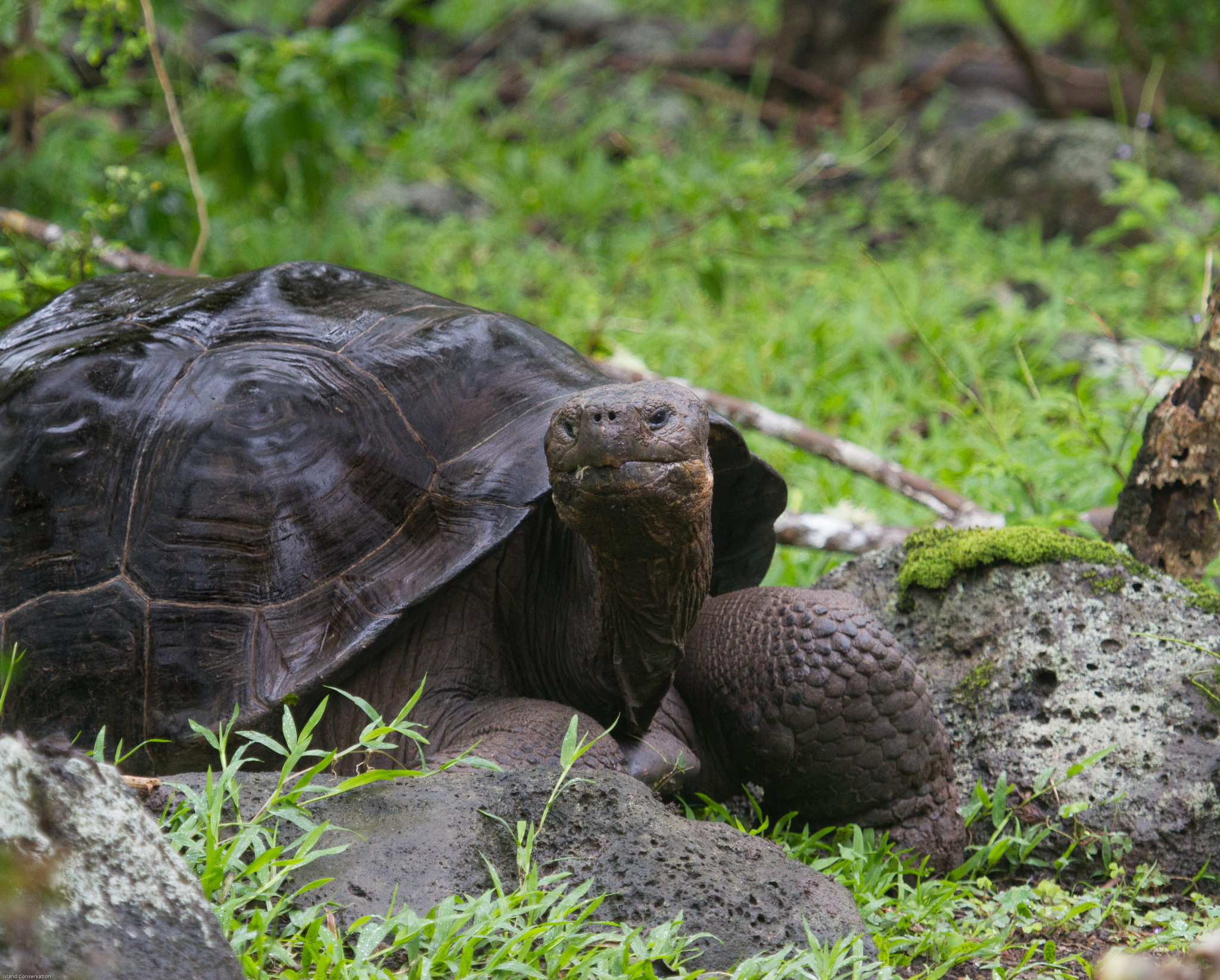 The sudden surplus of invasive species, combined with habitat degradation, put immense pressure on the native species of the Galapagos islands. Invasive rats and feral cats consume tortoise eggs and hatchlings, halting natural recruitment on some islands. Thriving island forest ecosystems full of epiphytes catching the garua sea-mist were transformed by feral goats into a moonscape of treeless dust bowls.

Thanks to conservation interventions, Giant Tortoise population declines have today been halted. Introduced rodents, cats and goats have been eradicated from several islands, allowing native species to recover. Island Conservation’s own Victor Carrion and Karl Campbell worked on the project that removed goats from Lonesome George’s home island of Pinta, and other islands, including Floreana. 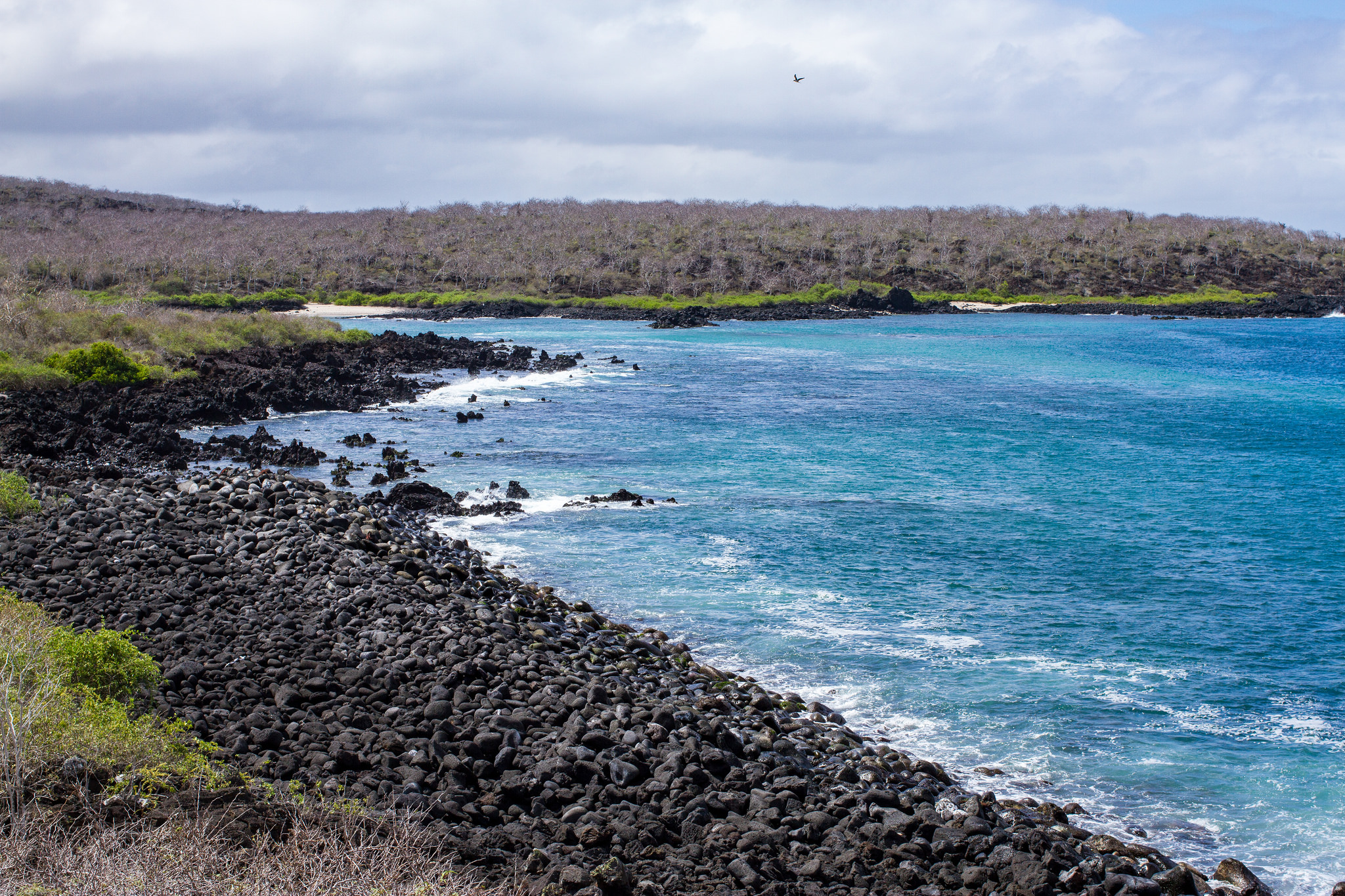 This potential discovery was exciting for researchers because they believe hybrid tortoises with Pinta genes could be cross-bred to produce another Pinta Giant Tortoise, thereby reviving the species from extinction. The discovery of H-2 prompted an intensive effort among park rangers and scientists to capture more tortoises that are likely to have Pinta DNA that would be fit for breeding. This endeavor generated another surprise: several Giant Tortoises on Isabela Island had DNA resembling the presumed extinct tortoise species native to Floreana Island. Scientists were bewildered. How could this be? 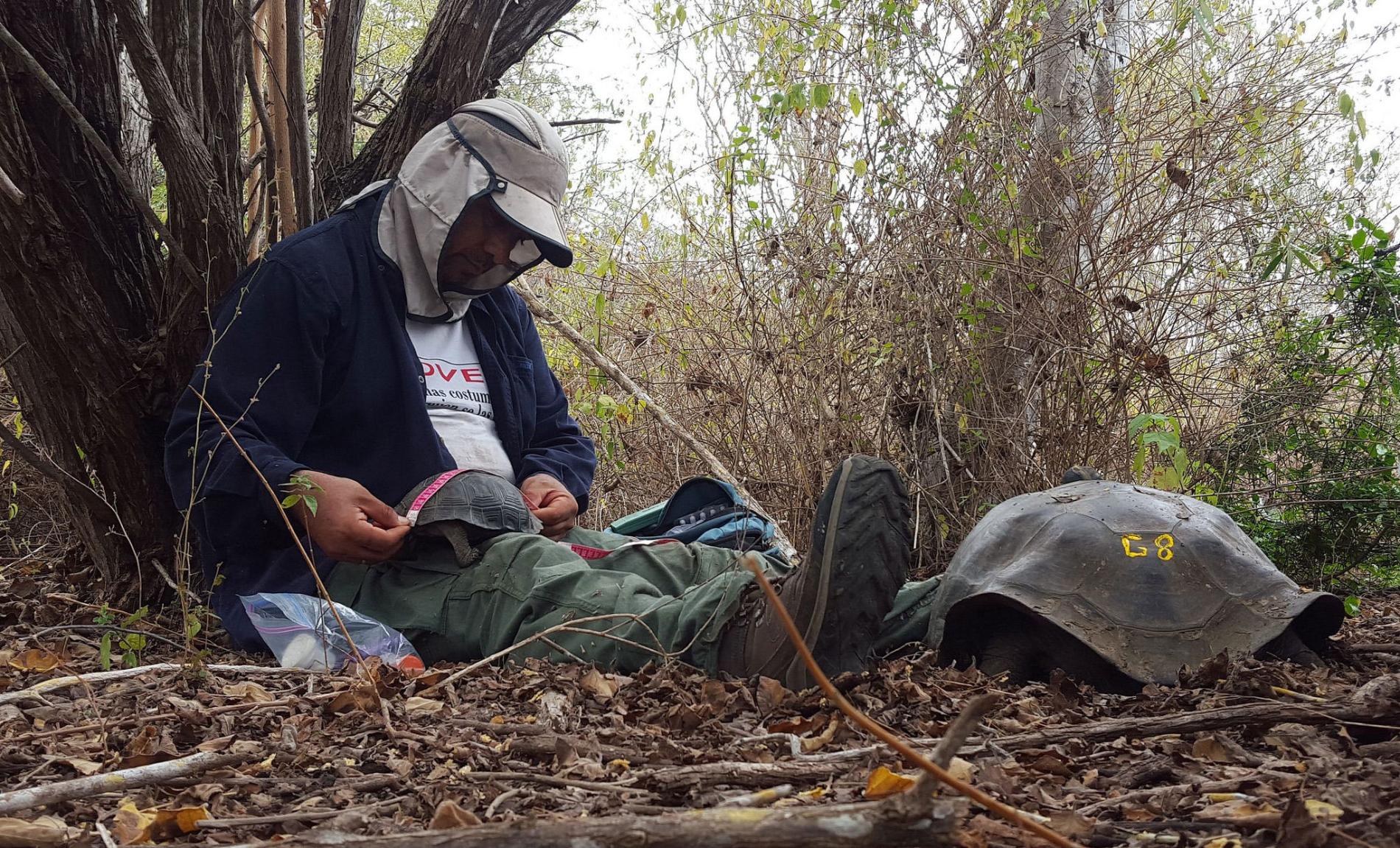 After examining logbooks from 19th-century sailors, researchers determined that pirates and whalers were responsible for transporting tortoises from one island to another. Tortoises are heavy—sometimes over 300 lbs. The sea-farers would sometimes drop the Giant Tortoises overboard to lighten the ship load, and some of these made it to shore–and did not always end up on the same island they originally came from.

As proposed for Pinta Giant Tortoises, through careful selection and breeding techniques, scientists hope to restore Floreana tortoise species and return them to their name-sake island. That proposal is projected to be a 200-300 year endeavor. Other scientists suggest that new genomic editing tools could be used to create Pinta and Floreana Giant Tortoises for release within a few years.

The revival of the Pinta Giant Tortoise has implications for island ecosystem health. Giant Tortoises play a critical role feeding on native plants and distributing their seeds around the island. They also clear spaces in the thick vegetation that other native species on the islands use for navigation. 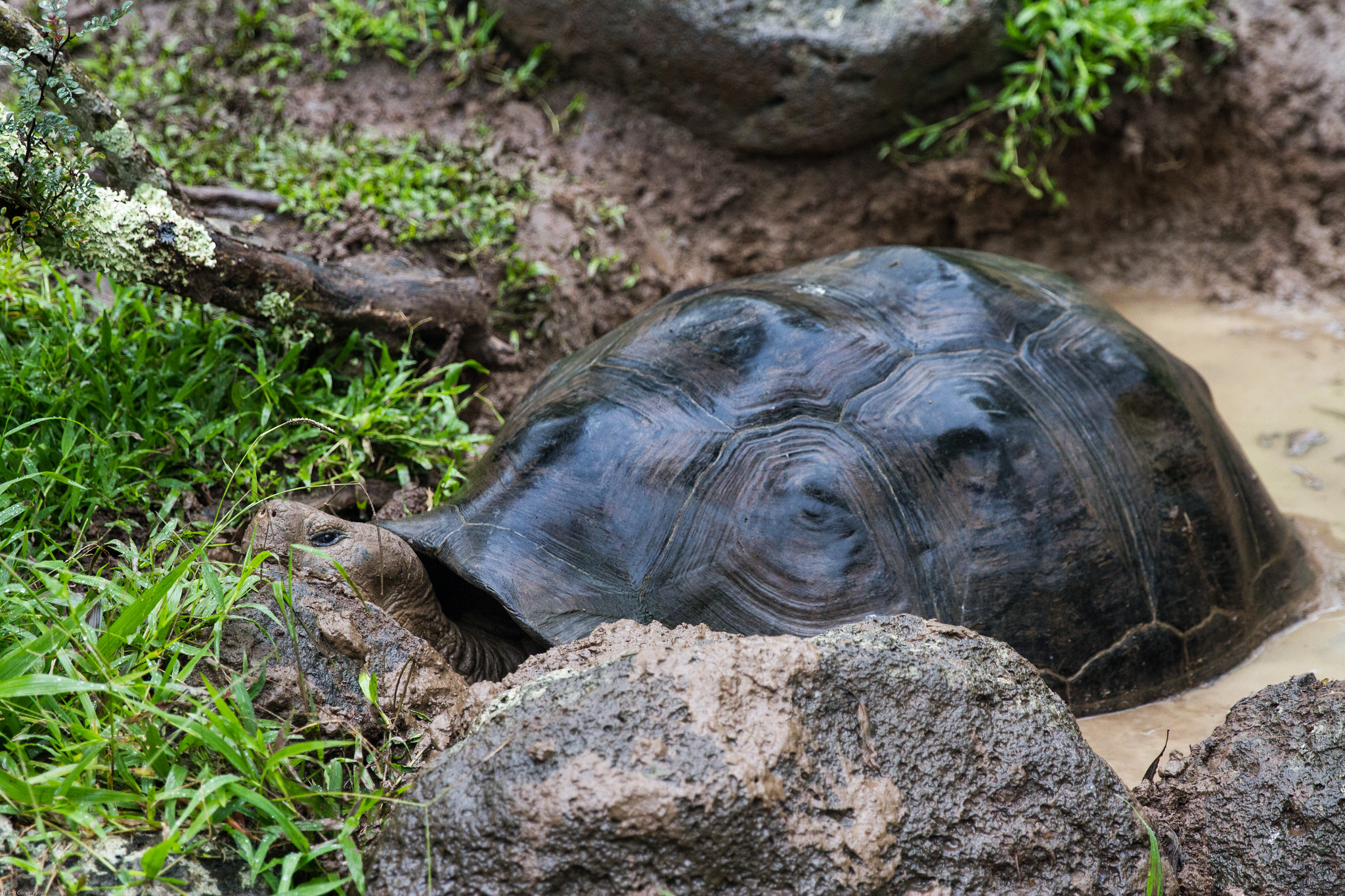 To be successful, the repopulation of Giant Tortoises on their name-sake islands must be done in tandem with invasive species removal projects. On Pinta, where invasive goats have been removed by Victor, Karl and their partners, the forest is recovering. Floreana is also now goat free, but introduced invasive rodents and feral cats are still present. Victor and Karl are part of Island Conservation’s team that, in conjunction with the Galapagos National Park, the Parish Council and others, are working on plans to rid Floreana of its remaining introduced pests in the next few years. Once successful, the Floreana Giant Tortoise and eleven other species currently extirpated from the island can be reintroduced. Adalgisa “Gisella” Caccone, an evolutionary geneticist who directs a conservation genetics lab at Yale University says:

It’s worth the time and effort to bring them back, even if it takes another 200 years. 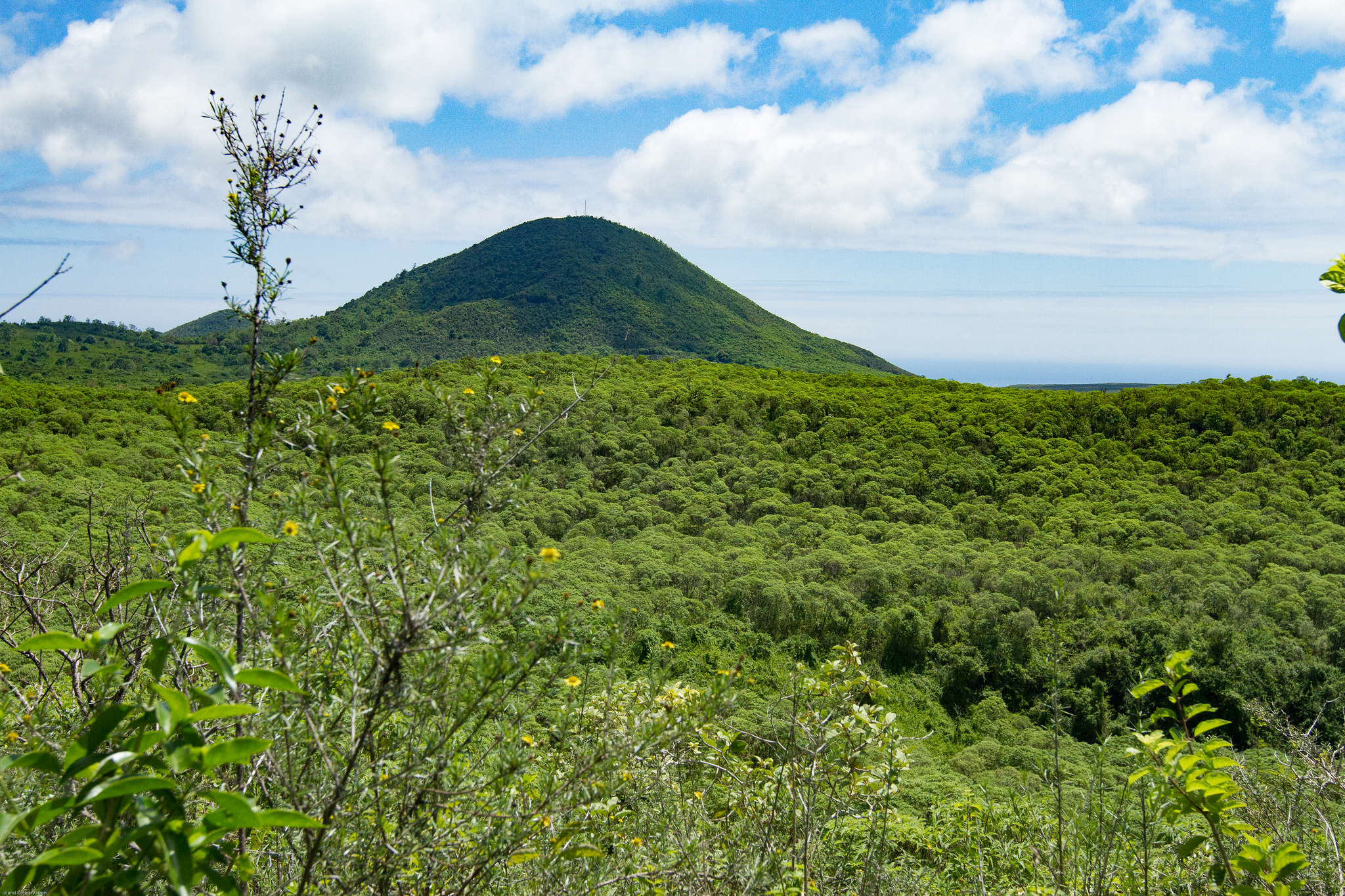 The outlook is promising for the Floreana Giant Tortoise, scientists think, but slightly less so for the Pinta Tortoises, as only one male and one female were found that could produce relatives of Lonesome George. Researchers are already hard at work on the project.