Wisdom, the world’s oldest known wild bird, has survived more than six decades of trials and tribulations, but Midway Atoll’s mouse problem is a new threat. 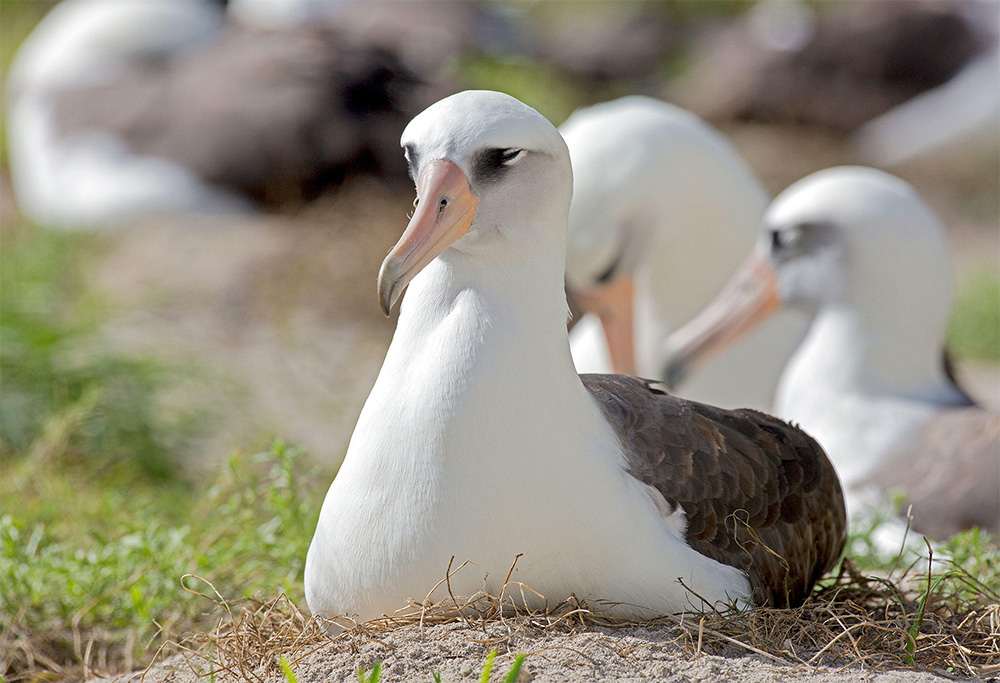 When the world’s oldest known wild bird, Wisdom, comes soaring in from a multi-week foraging trip to the North Pacific and drops her spatula-size feet onto the sands at Midway Atoll National Wildlife Refuge, she could be any one of a million Laysan Albatross. With a six-and-a-half-foot wingspan, they are one of the smaller species of albatross, but what distinguishes this 67-year-old from any other Laysan is a simple stop-sign-red band on her right leg that reads Z 3 3 3. Matt Brown, superintendent for the U.S. Fish and Wildlife Service in Papahānaumokuākea Marine National Monument (PMNM), the protected marine area encompassing Midway Atoll NWR said:

I’ve spent a lot of time at Midway, but I can’t spot Wisdom if it weren’t for her band. I could be looking at Wisdom next to a bird 40 years younger and not know it was her.

The red auxiliary band helps USFWS easily monitor Wisdom’s comings and goings, which has become especially important in the past few years—ever since the discovery of a gruesome threat straight from an avian nightmare: albatross-eating mice.

Midway Atoll is made up of three islands and lies some 1,200 miles northwest of Honolulu. Here, Wisdom has survived a lot: tsunamis, hurricanes, and even the bustling U.S. Naval Air Station based on Midway during the first few decades of her life. She’s out-maneuvered any fishhooks she’s encountered flying off the backs of longline fishing boats, and she’s managed to steer clear of deadly ocean plastics, the monumental growth of which parallels her life. As if she’s able to predict the future, she nests inland on the 1,500-acre island with a mean elevation of only 11 feet, so she won’t be the first to lose her favorite nesting location due to another threat: sea level rise.

But now, after all of that, Wisdom has to deal with the possibility of a common house mouse crawling up her back and attempting to make a meal of her in the middle of the night. That worries Brown.  He comments

The last thing we’d want to see is something happen to Wisdom, she’s an ambassador for Midway, Papahānaumokuākea, albatross, and the natural world as a whole.

Wisdom’s age was discovered in 2002 when the revered ornithologist Chandler Robbins replaced her silver-colored metal band that was showing signs of wear and looked up her history, recorded in The North American Bird Banding Program’s Bird Banding Laboratory’s database. Not only did he discover her age, but he also realized he was the one to first band her in 1956, when she was already an adult and estimated to be five years old—meaning she could be even older than 67.

In 2006, Wisdom was given her red band. Every year she’s returned to nest since then, Wisdom makes global headlines, as she did last December 13 when USFWS announced she was once again incubating an egg.

For decades, albatross and mice co-existed on Midway Atoll. The non-native predator arrived in the mid-20th century with the military. Then, in 2015, during the annual albatross census, volunteer counters reported bloodied albatross sitting in their nests. The albatross, which evolved without the presence of terrestrial mammalian predators, are doggedly devoted to their nest sites during incubation. Stumped as to what the cause could be, the USFW set up trail cameras and soon discovered that the predators were mice scurrying about in the middle of the night.

“This is the first time anywhere in the world house mice have been observed attacking adult birds of this size,” Brown says. Albatross are particularly vulnerable, because they will not abandon their eggs—even, apparently, when being eaten. Pairs alternate egg-sitting duties, and each shift can last up to two weeks or more during the two-month-long incubation period. While theories are circulating—from lack of food resources to dehydration due to climate change—Brown says they don’t really know what triggered the attacks. But they also don’t have time to invest in a multi-year study to find out. The problem is real, and they know how to solve it. 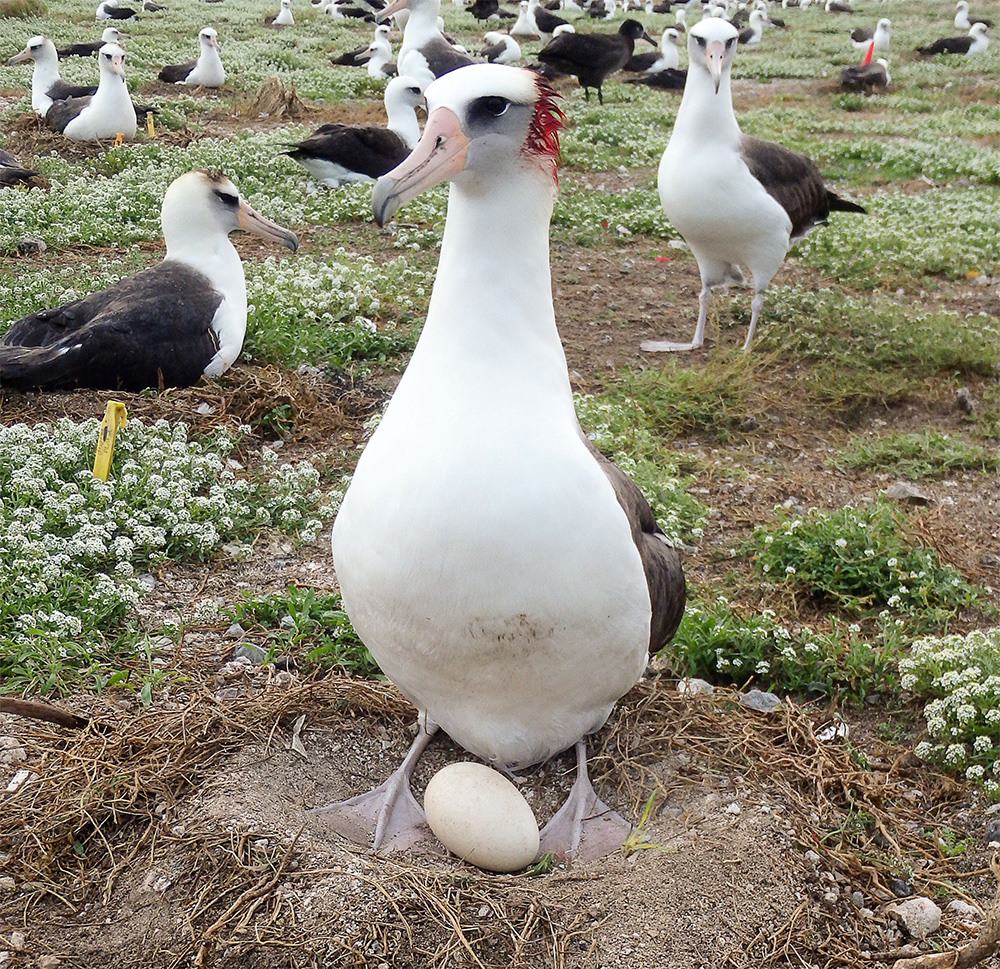 A Laysan Albatross with a visible head wound after suffering from an overnight mouse attack. Photo: USFWS

Midway provides nesting habitat for 73 percent of the world’s population of Laysan albatross and, combined with 38 percent of the world’s Black-footed albatross population, is noted as the largest albatross colony in the world. The first season of attacks resulted in 42 dead adult albatross and 70 abandoned nests. The 2016/17 breeding season saw a drastic six-fold increase in deaths, nearly 1,000 abandoned nests, and the geographic dispersal of attacks from four to 27 acres. To the relief of everyone, so far this season the numbers are down.

Some three million birds across 25 different species use Midway as their home range, breeding grounds, or a stopover; however, summer is a time when the fewest number are present. Thus, USFWS proposes to aerial- and hand-disperse rodenticide-laced bait pellets during summer 2019—after seabird chicks have fledged and before the next seabird breeding season begins. The goal is to eradicate all the mice from the island, and the proposed plan takes these additional birds and any possible adverse effect of the rodentcide into consideration. The greatest concern might be for the critically endangered Laysan duck, and the USFWS has planned protective measures to minimize impacts on them.

As for Wisdom and the millions of other albatross at Midway, they’ve made it through the most dangerous time; the greatest threat to being attacked by mice is during the two-month egg incubation period that runs December through January each year. However, the mice still pose a threat to the chicks.

Right now, Wisdom’s safe. But the only way we can guarantee Wisdom or any of the albatross that surround her are safe from mice is to remove every last mouse from Midway.

Over the years, Wisdom’s estimated to have raised 35 chicks. The fortuitous thing for Wisdom, her mate Akeakamai, and their chicks is the location of their nest site, which is in a part of Midway referred to as “town.” Brown said:

We’re fortunate that she nests in town next to residential buildings where we’ve regularly done mouse suppression for human safety. t’s not a guarantee of her safety, but Wisdom does benefit.

The other good thing going for Wisdom the rest of this season is she’s not spending much time on land. When she returns from foraging, she feeds her chick and heads right back out. A feeding session can last 20 minutes or less. Right now, Wisdom’s racking up more frequent flyer miles on a provisioning trip for her chick.

But last year, there were attacks near her nest, and UFWS quickly responded with rodenticide and mechanical traps. During the egg incubation period earlier this season, trail cameras were set up just to monitor Wisdom.

“We do have increased vigilance in the area,” Brown says. There are 50-some people living on Midway. “Everybody knows where she is. All of the staff on Midway keep an eye on her.”