I’m writing this from paradisiacal Fatu-hiva, the southern-most island in the Marquesas group. It’s been quite a busy (and at times wet and wild) ride since Richards’s last update.

We parted ways with Richard and Fred Jacq on Nuku Hiva and our motley crew boarded the Shark once again. After a night of travel, we dropped anchor at the lovely island of Ua-Pou. We started by organizing our not-unsubstantial supplies, and then we were able to hitch a ride with the local police. They were kind enough to drive us to the village of Hakatao, where we would connect with the local boatmen who would in turn carry us to our respective islets for further monitoring of invasive rats and native bird life.

After brief introductions, we boarded our Pirogues (incredibly functional wooden outrigger canoes fitted with two-stroke marine motors) and set out into the wind and waves. I was immediately impressed with our boatman as he bobbed, weaved, powered, and finessed us through seas that should have swamped us, but instead only resulted in mild drenching. Tehani and I lucked out in the draw of islands–Motu Oa is a relatively plateau-like island with fairly mild 30 meter-ish scramble to reach our campsite whereas Motu Takahe’, where our colleagues went, is a precipitous climb up a couple hundred feet or so of near vertical temperamental rock and limited foot-path that hasn’t really been used much since the last generation (now elders) used them to access sacred sites and harvest the occasional Sooty Tern egg. 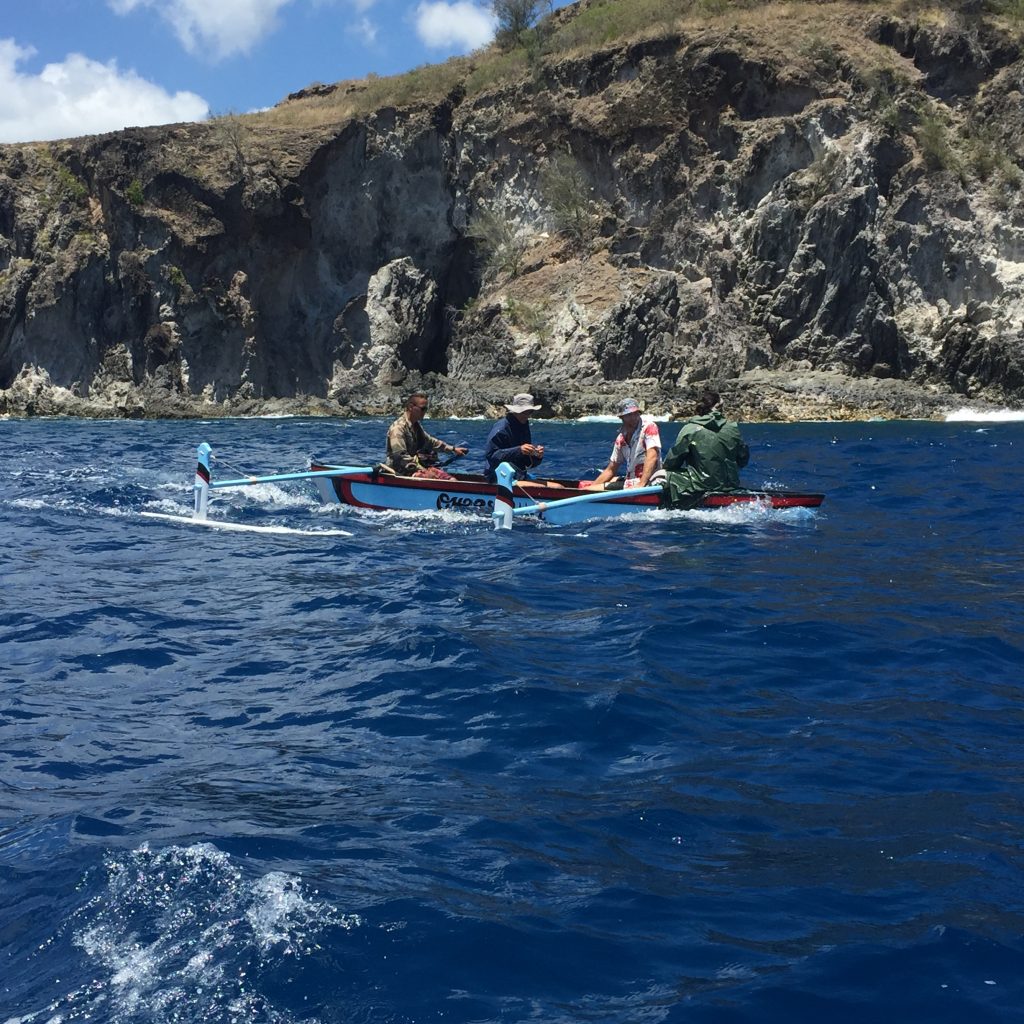 We were fortunate enough to hire some of the boatmen as porters to help us haul our gallons of water (one a day per person minimum), sundries, and gear to our respective campsites. These guys were truly marvels; after making wooden boats do things I haven’t seen since the Acteon and Gambier Archipelagos Restoration Project, they utilized a combination of bull-like power and a mountain goat agility (typical Marquesean) to help get us and our kit landed safe and sound. The crew that assisted Steve and David definitely earned their Hinano’s back on land after packing, hand lining and tossing gear up terrain that would give most people cause to turn right around and go back the way they came. I should also mention they did it either barefoot or with shoes so worn that they barely qualified as footwear!

On Motu Oa, Tehani and I spent the next two and a half days in a perpetual cloud of Sooty Terns as we went about our seabird and rodent monitoring. For those of you who haven’t been sung to sleep by a Sooty Tern vortex it really is…well maybe half-sleep is a better way to put it. 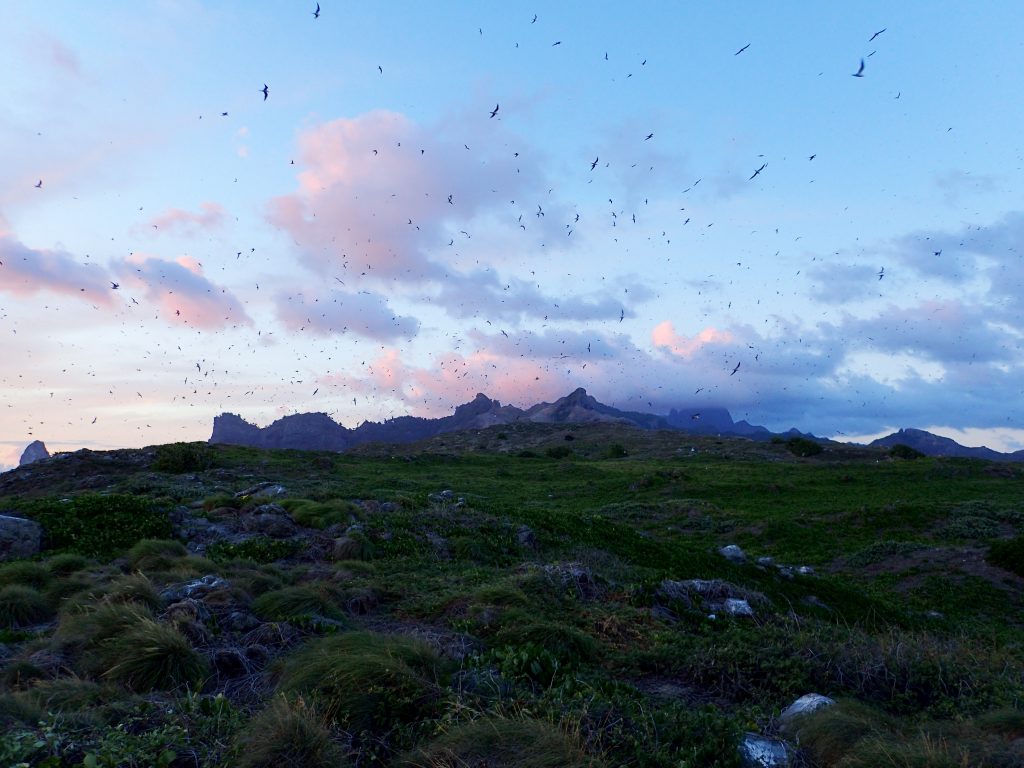 I can’t complain too much as we had a pretty spectacular view of Ua Pou and, although noisy, the clouds of birds are quite awesome to behold. After a quick lunch and meeting with local community members, it was back to the Shark–this time Southward bound to the island of Hiva Oa where we would again split up to cover another two islets. Tehani and I would visit Mohotani (home to the endemic Mohotani Monarch) while Steve and David, along with our old pal Jean Francois Butaud (met in Hiva Oa), would visit Fatu Huku–one of the only two places in the world where you can find the Marquesean Ground-dove. I didn’t get a chance to see Fatu Huku, but it sounded quite impressive, and while there were ground-doves present, Steve and David also reported high densities of native Polynesian Rats-thankfully no invasive Ship Rats were observed.

As for Mohotani, Tehani, and I were joined by a local guide from Hiva Oa who was familiar with the island and doubled as our cook/go-to guy for whatever we needed. We boarded a speed boat (I’ll emphasize the word speed) and set out for our home for the next four days.

The best analogy to describe that boat ride is to think of the planes that dive in parabolic curves to simulate near weightlessness for astronauts. The experience was analogous to that except our simulated weightlessness came at a frequency of about every two seconds immediately followed with a bit too prompt of a return to earth (or water in our case) that added another 2g’s or so to the landing. Maybe a bucking bronco is a better analogy; either way it was an exciting, but saddle-sore worthy ride…I probably shouldn’t elaborate further. 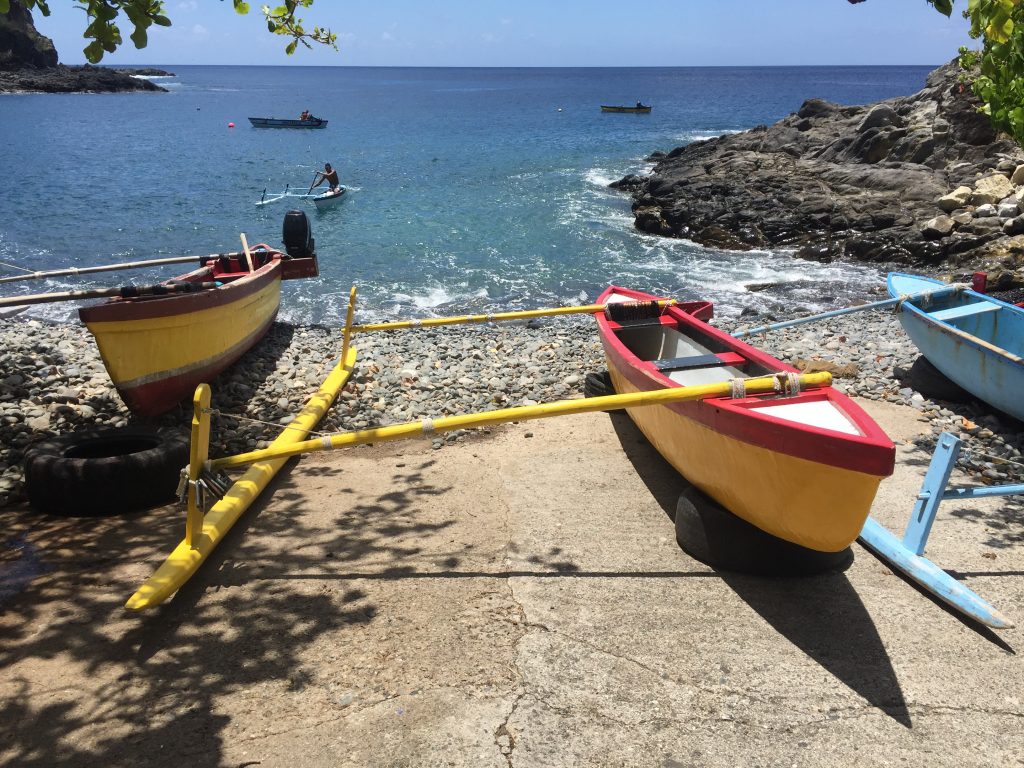 Mohatani, the second largest island we visited after Eiao (and home to the biggest centipedes I’ve ever seen in my life!), was a vision of contrasts; roughly half of the island is arid rock and scrub habitat due to the influence of introduced sheep, while the rest consists of some of the most impressive stands of Pisonia grandis I have ever seen; this doesn’t count the acres of feral chili pepper and basil growing in the understory (invasive in growth but impressive nonetheless!).

We again sampled for rodents during this trip and thankfully had better results than Motu Oa, and also thankfully did not detect any Ship Rats. There were, however, ample signs of invasive feral cat presence (latrines, predated White Tern carcasses,etc.), some disturbingly close to where we observed adult and juvenile Mohotani Monarchs. Just like Eiao, Mohotani is used by local hunters from the islands of Hiva Oa, Fatu Hiva, and Tahuatta as a place to harvest sheep as well as fish. Thankfully, we did not detect very much sheep activity on the island; from what I understand unmanaged hunting coupled with the tough conditions of the island (no water, very hot) has really driven the sheep population down with some locals putting their numbers at fewer than thirty. 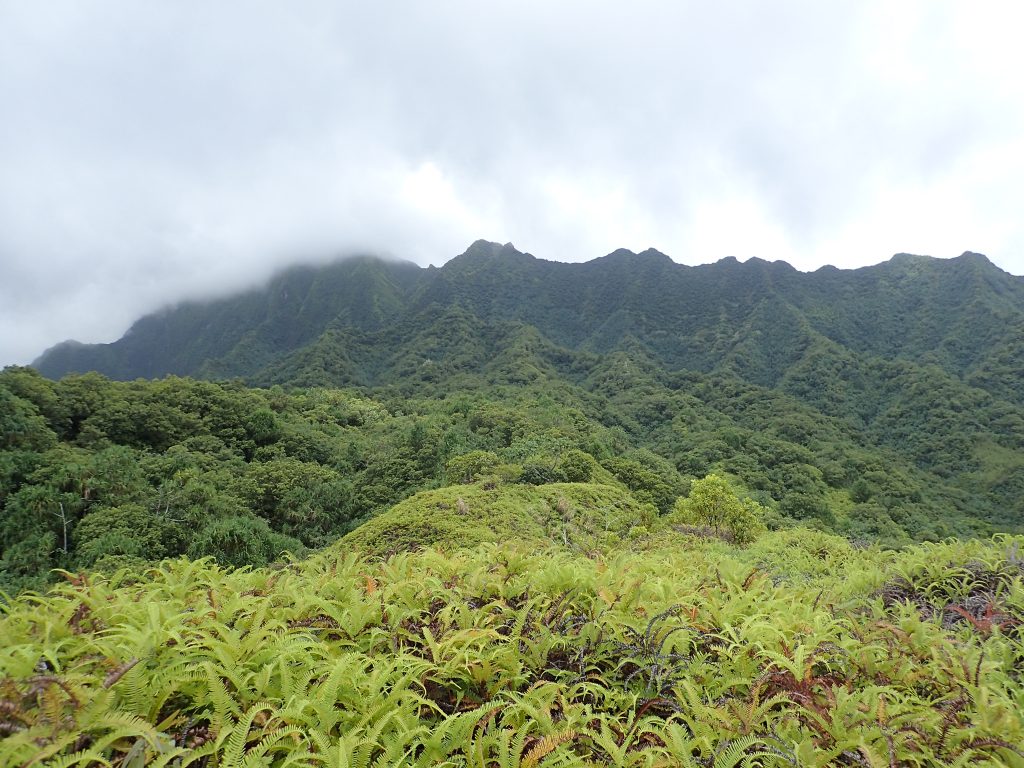 Steve, David, and Jean-Francois joined us for our last night on Mohotani and, after a long day, we demobilized and made our way back to Hiva Oa. Once back on Hiva Oa, Steve, David, Tehani, and I spent one last night together at an awesome pension before our final parting. Early the next morning I boarded the boat to Fatu Hiva and here I have been for the past 9 days.

We immediately set to work to protect the Critically Endangered Fatu Hiva Monarch. The locals have taken what can seems like a hopeless battle and given the Fatu Hiva Monarch a fighting chance to hold on against the waves of predators that never cease to encroach on them.

I have always been a strong supporter of building capacity in conservation projects like this one even before I came to Island Conservation, but the importance of our work building capacity with our local partners around the globe has really hit home for me here on Fatu Hiva. I am very proud to be a part of an organization that places such high value in this approach to conservation! 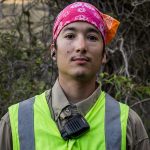 Jason received a BS in Wildlife Management and Conservation from Humboldt State University. The bulk of his experience has been in the field of invasive species control. When not working, Jason enjoys the outdoors, cooking, self-subsistence, and most other good times in general.