The Endangered Straw-headed Bulbul has found a safe new habitat on an island free of invasive species, but researchers think more needs to be done.

On Pulau Ubin, an island Northeast of Singapore, a population of Endangered songbirds have found a safe home. The Straw-headed Bulbul is native to Southeast Asia, but due to habitat loss, pet trade, and invasive species, its population has been on the decline throughout its native range. Yong Ding Li, a PhD student at Australian National University, said:

The bird has gone extinct in Thailand and parts of Indonesia where it used to be found, including the whole island of Java. It has also declined across Malaysia. 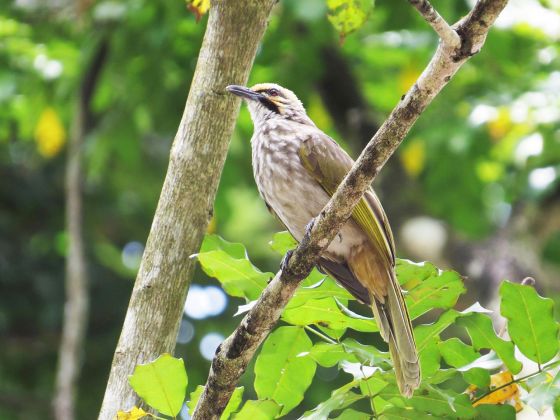 Straw-headed Bulbul perched in a tree.

However, the population on Pulau Ubin appears to be holding steady with approximately 200 birds, which makes up almost one-third of the estimated wild individuals in all of Southeast Asia. Researchers’ estimates informed the conservation status to be raised from Vulnerable to Endangered by the IUCN Red List last December, but the discovery of remote populations suggests there may be more hope than previously thought. Ho Hua Chew, the Vice-Chair of the Conservation Committee at Nature Society (Singapore) (NSS), commented:

The bulbul is found in pockets of woodland such as Pulau Ubin, Bukit Brown and Khatib Bongsu. More should be done to protect such places, which are currently outside the existing reserves.

Throughout the birds’ range, the populations have decreased due to a number of factors including pet trade, habitat loss, and the presence of invasive birds such as the White-crested Laughingthrush, which compete with the Bulbuls for food. Researchers are also concerned about inbreeding and disease with such a small population.

Conservation biologists are working to create a species recovery plan which will involve stakeholders from the species’ entire habitat region. With the help of zoos, they want to make the Straw-headed Bulbul a flagship species in hopes they can protect them and other threatened wildlife in the region.