Land-dwelling, native Raccoon Dogs and Carabine Beetles have an appetite for escargot, but the tree heights offer a safe space for the snails. Professor Ikuyo Saeki from the University of Tsukuba and her colleagues are finding evidence that the survival rate of the tree-migrating snails is far greater than the individuals that stay on the ground. A number of snails choose not to climb into the tree canopy and become easy prey for a list of predators. The researchers also noticed an abundance of moss, lichen, and other snail-diet food in the trees. This could also inspire the Mai-Mai Snail to move higher. Defying gravity to avoid predators is believed to be the primary behavioral cause, but it’s nice know they are making tree-top dinner reservations as well.

Normally, tree-climbing would be an excellent way for snails to avoid predators and find food sources. However, this evolutionary-devised strategy is being thwarted by three species of invasive rats, known to eat snails, who have moved onto Hokkaido Island. Rats are expert climbers, and now that they’ve invaded the island, the snails in the canopy are highly vulnerable. 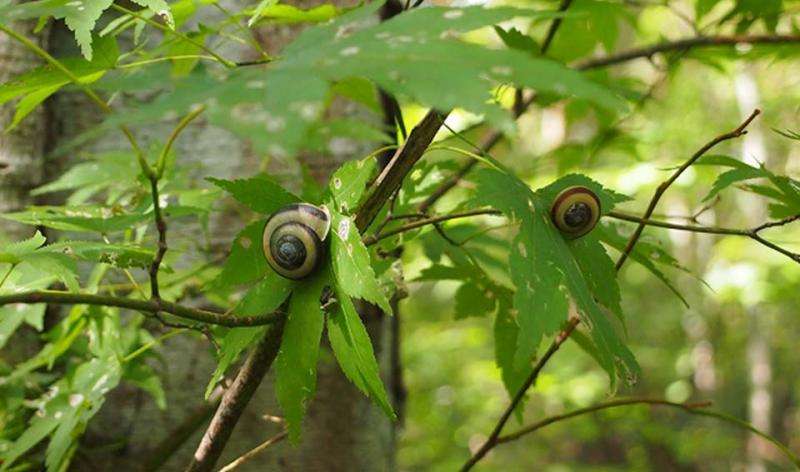 Sapporo Mai-Mai Snails out on a limb. Credit: University of Tsukuba

An animal climbing a tree in the face of immediate danger is a well-known defense mechanism. If invasive predators are in fact climbing trees and hunting snails, the success of this adaptive behavior declines. Although the snails’ seasonal migration is an act of preservation–a slime climb to safety–it won’t offer any protection against invasive rats.

In situations like this, conservation intervention can help. Removal of invasive species can restore native species’ natural conditions, such that their instinctual behaviors can help them survive.

Featured photo: Forest of the Kuril Islands. Hokkaido Island, where the research was conducted, is part of this archipelago. Credit: Peter
Source: PhysOrg