Holly Jones, Assistant Professor joint-appointed to the Department of Biological Sciences and Institute for the Study of the Environment, Sustainability, and Energy at Northern Illinois University, shares what it is like to be a women in STEM.

I was interested in math, science, and the outdoors at a very young age growing up in Iowa. My grandma played a strong role in my love of outdoors; she took me fishing at the farm where she grew up and I spent a lot of time helping her and my great-grandma with flower and vegetable gardens. My mom was a flight nurse and flew on a helicopter to pick up critically ill patients. She was then and remains today one of the strongest women I know and encouraged me to pursue whatever I wanted as a career. My dad worked as an inventory manager in manufacturing. Neither has a four-year college degree.

As a high school student, when I had taken all the science classes my school had offered, they were required to send me to the college or vocational science class of my choice. I chose to take Marine Biology at a vocational school, which was taught by Dr. Stiles, who ended up inspiring me to pursue a career in science. She was a wealth of knowledge and I had never been challenged the way her course challenged me. As part of the course, I was trained in SCUBA diving, with my first open water dive in the murky waters of Gray’s Lake in Des Moines. For our spring break, we went to Florida and embarked on our first ocean dives. I was enamored with the ocean and in awe of Dr. Stiles, who could identify every creature along the coast and in the water. I aspired to be like her when I grew up.

I was enamored with the ocean and in awe of Dr. Stiles, who could identify every creature along the coast and in the water. I aspired to be like her when I grew up.

In college, I pursued a double Marine Biology and Ecology and Evolution degree at UC Santa Cruz where an inspiring professor introduced me to my lifelong research topic–island conservation. I excelled in the Marine Conservation course he taught, which led him to offer me a job for the non-profit he co-founded called Island Conservation. As an intern and then field researcher for Island Conservation, I found my niche and ended up publishing papers on the impacts of invasive rodents on islands and the benefits of removing rodents for preserving biodiversity. I also found one of the strongest women mentors I met in the office manager, Virginia McDermott. Virginia worked for a Fortune-500 company during her corporate years but was spending her retirement helping Island Conservation get off the ground. Her skills weren’t scientific but she taught me what a strong woman looks like, how she interacts professionally and gave an air of confidence that demanded respect. I gained the confidence to pursue a Ph.D. at Yale School of Forestry and Environmental Studies with strong encouragement from Virginia and the two co-founders of Island Conservation.

[Virginia’s] skills weren’t scientific but she taught me what a strong woman looks like, how she interacts professionally and gave an air of confidence that demanded respect. 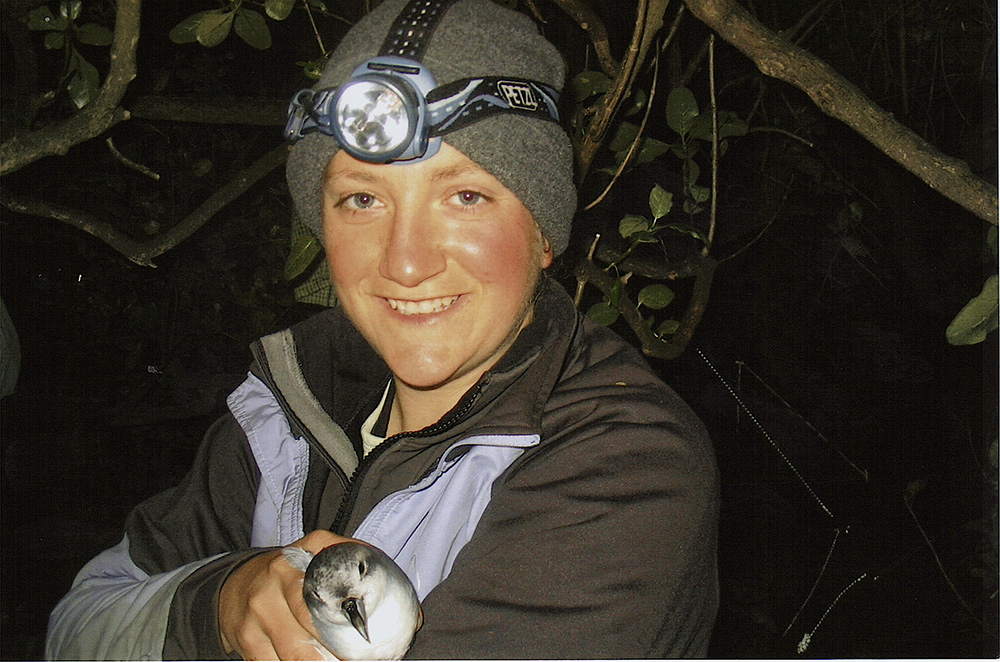 As a Ph.D. student, I found only a single female tenure-track faculty member as a potential role model for me but otherwise, Yale School of Forestry and Environmental Science was dominated by older men. I knew I wanted to pursue academia but hadn’t found a female role model to look up to or to even prove to me that it was possible for a woman to achieve. I pursued a field research dissertation which consisted of my visiting >20 islands off of New Zealand to gauge ecosystem recovery following invasive predator removal. Despite having few to look up to, I defended my dissertation 6 months pregnant and had our first daughter a week after graduating. After my Ph.D., I sought a postdoctoral position with a female tenure-track (she got tenure while I was there) professor who had three small children including one our first daughter’s age. Erika Zavaleta is a highly accomplished scholar and I wanted to learn from her academically and try to discover how she balanced work and family. She proved to be an excellent mentor, helping me find my way as a first-time mom and an academic job seeker.

I knew I wanted to pursue academia but hadn’t found a female role model to look up to or to even prove to me that it was possible for a woman to achieve. 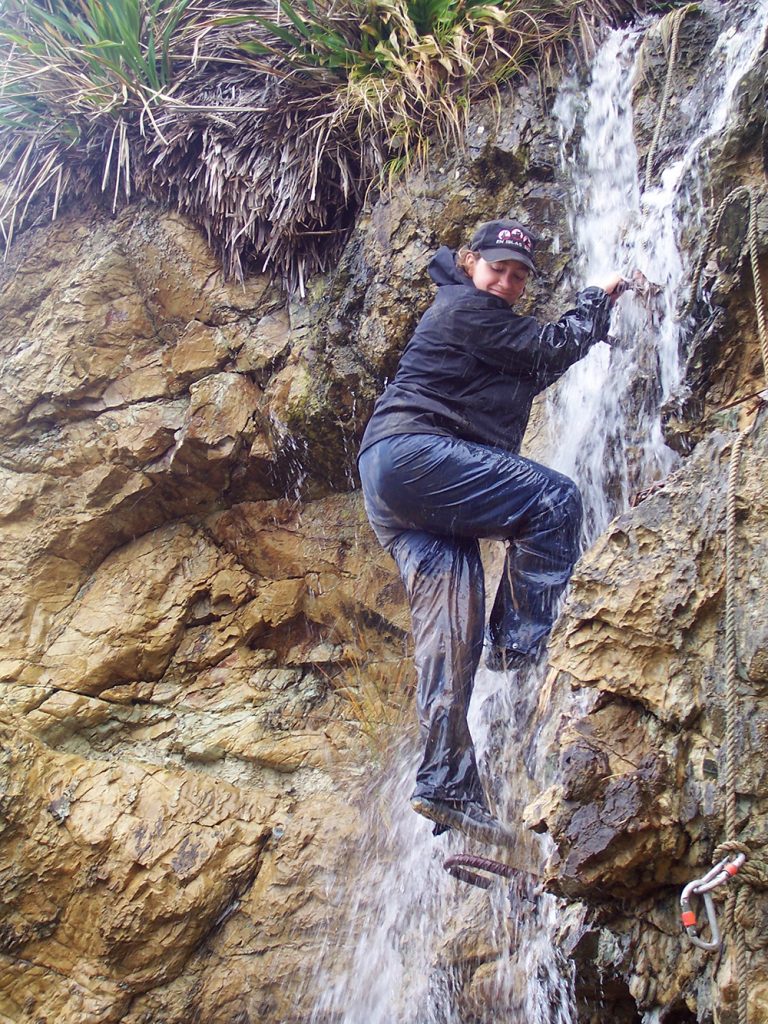 Holly Jones scaling a waterfall to get down to the beach on one of her
study islands.

I still feel frustrated as a woman in STEM (Science, Technology, Engineering, and Math) with policies like Family Medical Leave Act (FMLA), where one is encouraged to be thankful to take vacation pay or no pay in order to spend time at home with their newborn. I feel frustrated as I see women highly represented in graduate school in my field, and watch their representation diminish higher up the academic ladder. I feel frustrated when students refer to me by my first name when they don’t do the same with male colleagues or when I have to comport myself in a way that evokes authority and demands respect rather than just getting it by default. But mostly, I’m hopeful. I see the many female graduate students in my lab–determined, intelligent, and driven–who I know will achieve whatever they set out to even in a still-biased world. I see my two daughters and I know as they see what I do, they will know they can pursue whatever they want because they’ve grown up around a strong role model. I also know that as our daughters see my husband and how he is our biggest cheerleader and how he demands women are respected, they will grow up self-assured and confident to be whatever they want to be. I’m hopeful that one day, they will tell their stories but will not need to qualify them by saying “As a woman…” and instead just view their accomplishments from the lens of a respected person.

But mostly, I’m hopeful. I see the many female graduate students in my lab–determined, intelligent, and driven–who I know will achieve whatever they set out to even in a still-biased world. 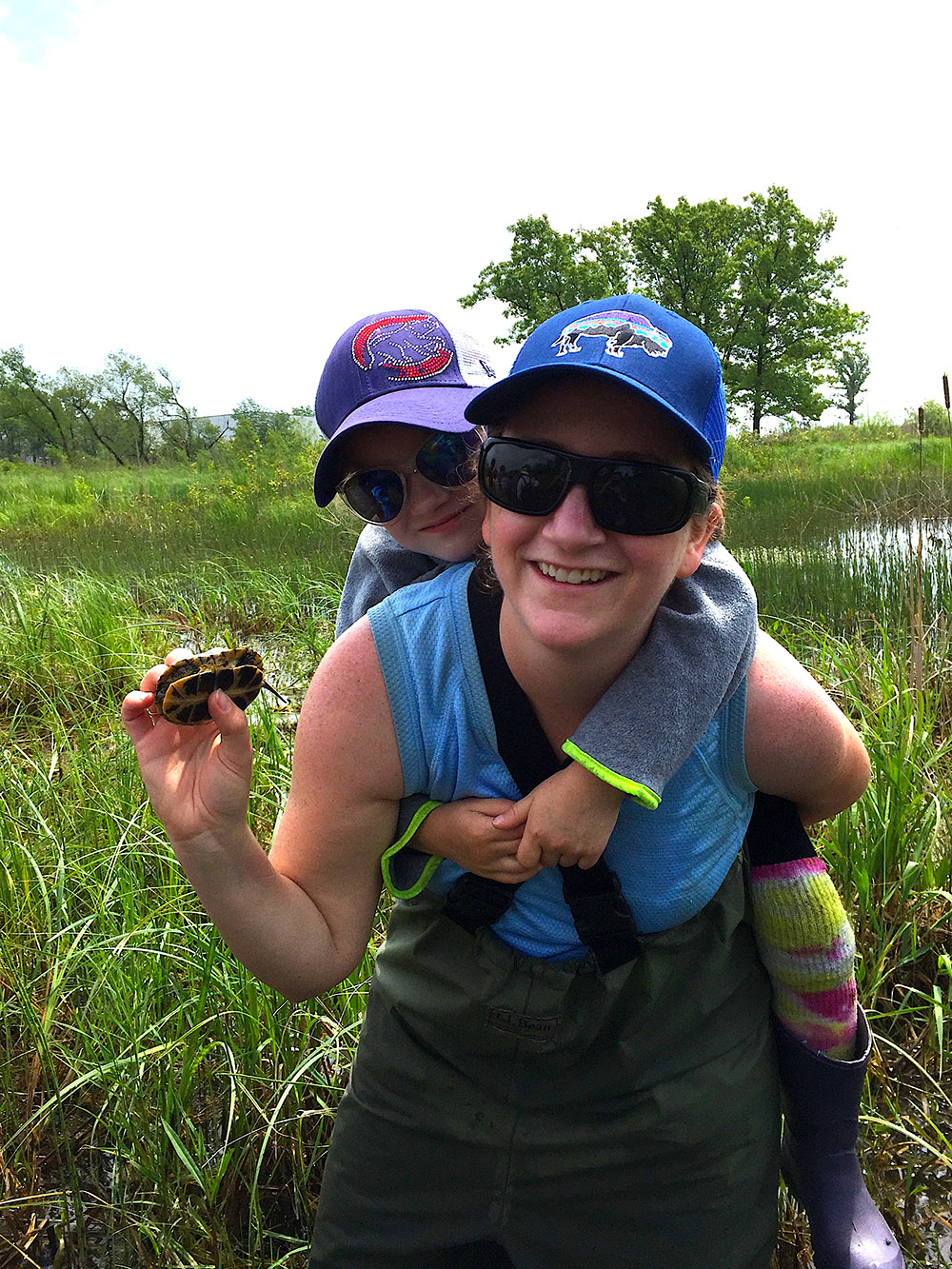 Holly holding an Endangered Blanding’s Turtle while in the field in Illinois with her daughter.

I interact with K-12 students every year. I go to my daughter’s Montessori school and talk about what life as a Conservation Biologist is like. I talk to high school students about all the fascinating things one can find in the animal world. I mentor graduate students, and currently, have four female graduate and an undergraduate student that I interact with weekly and encourage to pursue careers of their choice. Even though doing field work on islands in New Zealand is incredibly rewarding, interacting with these strong young women and younger elementary and high school students is by far the most satisfying parts of my job. A few inspirational people helped shape my career in STEM and I know that given my position, I have the power to do the same for the next generation. It’s a responsibility I enjoy immensely and never take lightly. 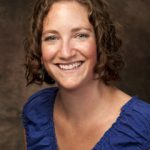 Dr. Holly Jones is an Assistant Professor in Biology and the Institute for the Study of the Environment, Sustainability, and Energy at Northern Illinois University. She studies ecosystem restoration and conservation biology. Holly has worked on issues ranging from island conservation, seabird restoration, and prairie restoration, to identifying where nature can help people adapt to climate change. She is also an Associate Editor at Biological Invasions and is passionate about science outreach, especially to K-12 students. Her favorite field assistants are her two daughters.