A recent study shows some New Zealand birds are reluctant to fly over water. Scientists are wondering just how far birds are willing to fly in order to recolonize.

Passerines are songbirds which can perch. More than half of all bird species are passerines and many of those found in Aotearoa/New Zealand are unique. Some, such as the South Island Saddleback, South Island Robin and Mohua also have a few other attributes in common: they’re rare, very vulnerable to stoats and are relatively poor fliers. 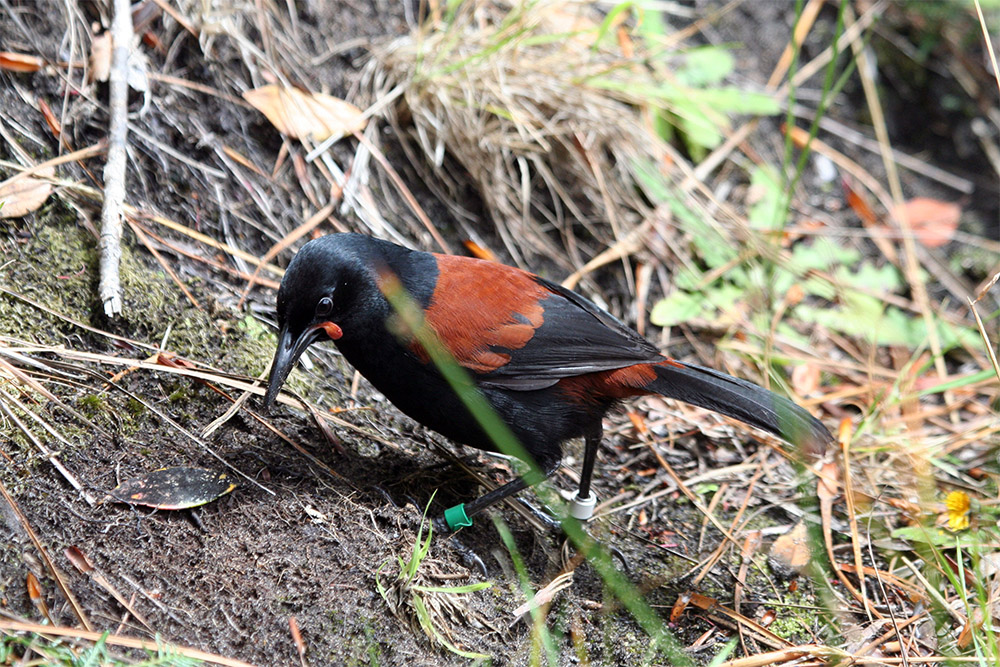 Because they’re poor fliers, these three species are also believed to be reluctant to fly over expanses of water. It means that when they’re relocated to a stoat-free island sanctuary, they have a tendency to stay put, even when breeding success leads to an increase in numbers and there are other, safe and suitable islands nearby. The reluctance to cross water also limits gene flow between populations separated by water – leading to possible inbreeding of island populations over time.

Well if you weren’t great at flying how would you feel about taking off across an expanse of turbulent ocean?

All this matters because it’s useful to know what distance the three rare species are prepared to travel to colonize another island. When can birds be left to recolonize on their own and when will they need help to relocate? All three species have been translocated to stoat-free islands in Fiordland’s Dusky Sound, but as scientists discovered recently, they vary in the extent to which they have spread out from their original island sanctuaries.

In an article recently published in Notornis, scientists from Te Papa Museum and the Department of Conservation investigated the Dusky Sound dispersal of the South Island Saddleback, South Island Robin and Mohua since birds were first translocated some years ago. 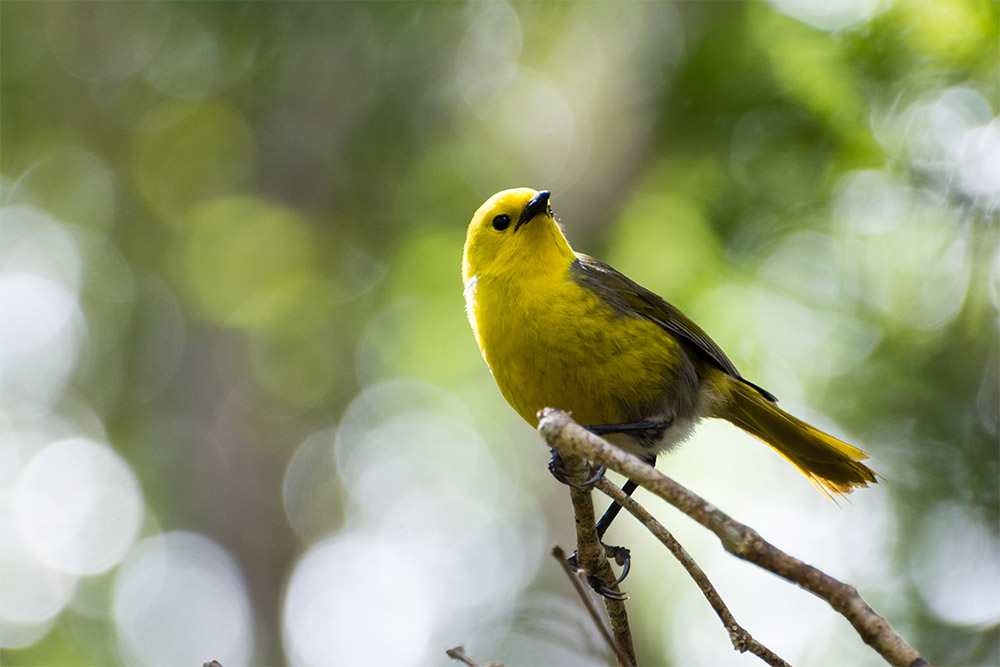 “Three endemic passerines considered to have poor dispersal ability have been reintroduced to 3 islands in Dusky Sound where stoats (Mustela erminea) have been eradicated: South Island Robins (kakaruwai, Petroica australis) to Anchor Island (1,137 ha), Indian Island (168 ha) and Pigeon Island (73 ha), Mohua (yellowhead, Mohoua ochrocephala) to Anchor and Pigeon Islands, and South Island Saddleback (tīeke, Philesturnus carunculatus) to Anchor Island only. Mohua have also been reintroduced to nearby Resolution Island (20,887 ha), where stoats are controlled to low density. Stoat traps set on numerous ‘stepping stone’ islands around and between these 4 islands have created a network of predator-free habitat at varying distances from the reintroduction sites. We recorded sightings of these species during landings on 56 islands in Dusky Sound in November 2016.” 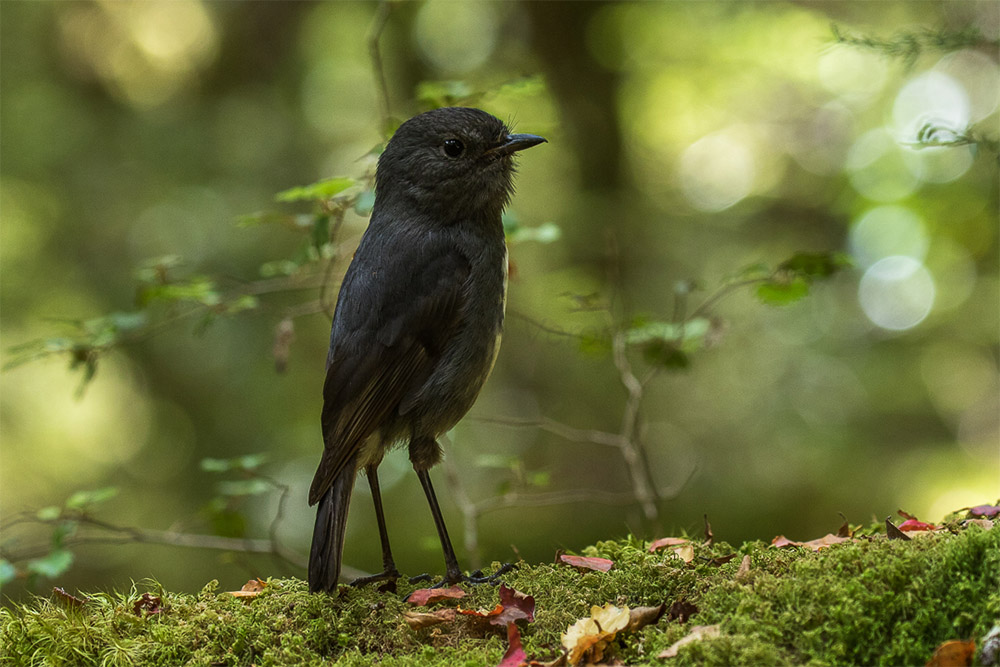 South Island Robins were by far the most confident dispersers of the 3 species, covering a distance of up to 1.4 km. They were sighted on a further 33 islands in the Dusky Sound area.

In contrast, mohua and South Island Saddlebacks had each crossed a single water gap only, of 90 m and 100 m respectively.

The robins not only traveled the furthest. They also appear to have displaced resident tomtits in some instances. 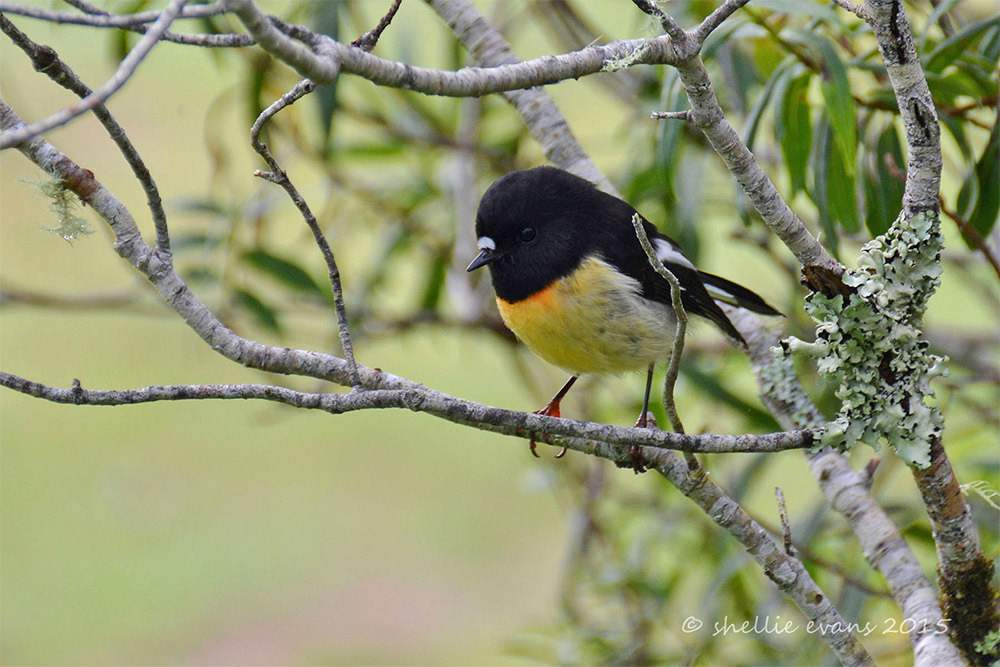 “Robins have apparently displaced congeneric tomtits on small islands in Dusky Sound. The smallest island that we recorded both species on was 40 hectare Parrot Island. We failed to record Tomtits on 9 smaller (1-21 hectare) islands where they were recorded from during 1979-84, all of which now have Robins. We also recorded Robins (but not Tomtits) from 19 additional islands (0.2-20 hectare) for which we have no ‘pre-robin’ data. The only small island where we recorded Tomtit was 0.6 hectare ‘Shag Island 5’. Robins have not yet recolonized the Shag Islands which are east of Long Island.”

Removal of stoats has been crucial to the robins’ success.

“The rapid recolonization of Dusky Sound islands by South Island Robins following their translocation, and supported by extensive stoat trapping, provides strong circumstantial support for stoat predation being the cause of extinction of Robins in Ducky Sound in the early 1900s. Richard Henry reported that the formerly common robins had disappeared from the area by 1902, which was less than 2 years after the first sighting of a ‘weasel’ (probably a stoat) on Resolution Island in March 1900.

Stoat trapping in Dusky Sound since 2000 has created extensive habitat for Robins to recolonize, beyond the sites that were the initial focus of the trapping. The program is focused primarily on removing stoats from large islands (particularly Anchor and Resolution Islands) and preventing their reinvasion. Trapping on numerous ‘stepping stone’ islands to reduce the rate of stoat reinvasion of the large islands has probably benefited other land bird species as well as the reintroduced Robins (eg Bellbird, Kaka and Yellow-crowned Parakeet). However, stoat control may have been to the detriment of Tomtits on small islands in Dusky Sound, with recolonizing Robins apparently out-competing or displacing their smaller congener, as has occurred at 2 other restoration sites.”

South Island Saddlebacks, Robins and Mohua species have also been the subject of other translocation operations.

“One or more of these 3 species have been translocated to more than 40 islands and a few mainland sites around the South Island and Stewart Island. Information on their dispersal ability across water could guide decisions on whether further translocations are necessary, both in respect to whether birds are likely to colonize nearby islands or forest patches unassisted, and in order to manage gene flow within dispersed metapopulations.”

So what do the findings mean for translocation operations of these 3 species?

“Our findings suggest that islands or forest fragments situated less than 1.5km apart are within the dispersal range of South Island Robins, reducing the need for initial and supplementary translocations. In contrast, South Island Saddlebacks are unlikely to cross gaps more than 160m, limiting the number of sites where they will be able to establish new populations naturally, or maintain gene flow between adjacent populations. The distance that Mohua will disperse across water is apparently situation or location dependent, and we recommend further survey of islands and shores near release sites or established populations, to guide management decisions.”