Conservation fieldwork on explosive-ridden, ecologically and culturally rich Kaho’olawe Island is as rewarding as it is challenging.

Everyone in Hawaii knows Kaho’olawe Island is littered with unexploded ordnance (a.k.a. bombs). For anybody who doesn’t know, the island was used as a bombing test site by the U.S. military from 1941-1990. But leftover ordnance is not the only problem on Kaho’olawe. The island is also infested with damaging invasive mice that ravage the recovering island’s native plants and animals in addition to impeding traditional cultural practices that rely on those native species.

So, Island Conservation is partnering with Kaho’olawe Island Reserve Commission (KIRC) to protect native plants and animals by removing these invasive predators from the island. When I told my friends and family, “I’m going to Kaho’olawe Island to collect baseline data on native animals to inform our restoration efforts!” They replied, “Don’t get blown up!” 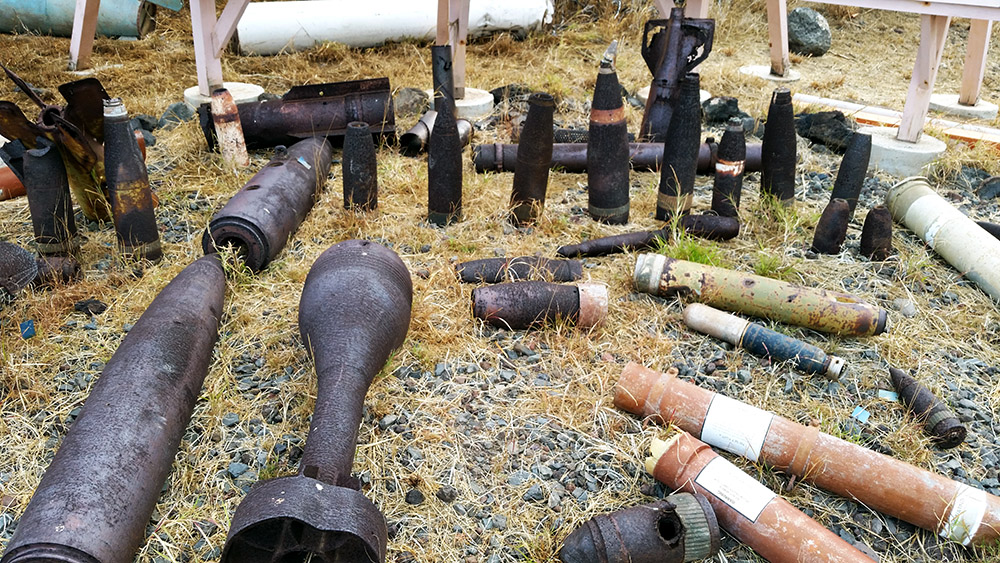 I am excited to support this project in its beginning stages by helping with baseline monitoring and mapping the regions of the island that we will be working on. Designing a project to remove pests when we cannot safely access many large portions of the island is challenging. Kaho’olawe is a very big island–11 miles long by 7 miles wide and although it is an uninhabited State Reserve, it has been heavily impacted by human activities, particularly the bombing by the U.S. military. We are helping KIRC develop a plan to remove invasive species form the whole island, including the areas that are unsafe to access due to the unexploded ordnance.

Despite the presence of bombs on the island and the warnings from friends and family, I feel very safe on Kaho’olawe. The island’s dangers are well-understood and our work does not put us in harm’s way. A clearly labeled border with posted signs divides the area where bombs and debris have been cleared and where they have not and access is forbidden. Additionally, a staff guide accompanies me wherever I go. Jamie Bruch, a capable, knowledgeable, and passionate guide, has been working on Kaho’olawe for 13 years. He is a steadfast presence, overseeing many aspects of the Kaho’olawe restoration project. Jamie helps with a variety of tasks, including checking catchment tanks, irrigating native restoration plantings, and trapping invasive mice to monitor population density fluctuations.

And wow—the invasive mice sure are thick out here! In some places you can hardly walk without stepping on them. Mice populations explode when seasonal rains set in. The island does not have natural groundwater sources. The landscape is dry and barren, partially due to its wind-protected location in the rain shadow of Maui’s towering Haleakala volcano, and partially because the island was used as a bombing site. The seasonal rainfall offers a precious source of water that the invasive mice are quick to take advantage of. The removal of invasive mice will protect a variety of native species, including the Vulnerable Hawai’ian Petrel, Endangered Newell’s Shearwater, and the Critically Endangered plant Kanola (Kanaloa kahoolawensis). It will also create a promising translocation site for other Critically Endangered species at risk due to climate change, such as the Nihoa Finch, Nihoa Millerbird, and Laysan Duck. 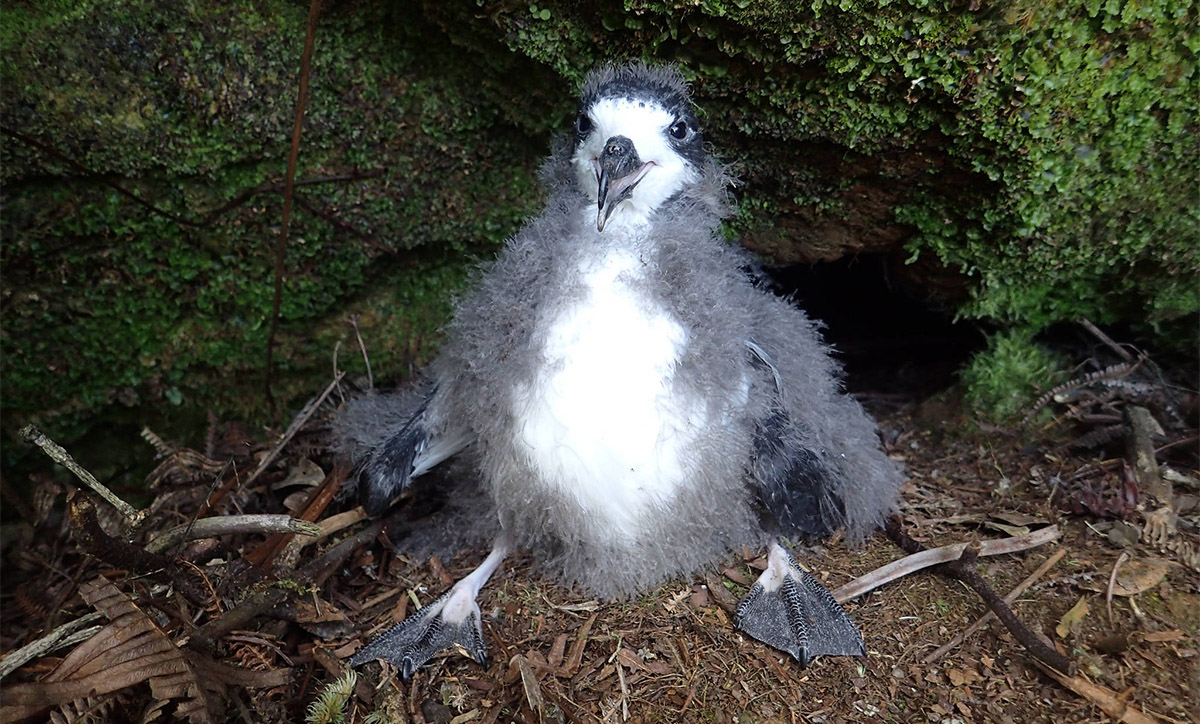 The work is challenging, but KIRC feeds us very well which keep us going! Breakfasts of pancakes, French toast, scrambled eggs, sausage, fruits, and orange juice are ready for us as early as 4:15am. Dinners of spaghetti, curry, chili, or barbecue with a side of big salads and a chocolate brownie are just as impressive. On some nights we are up until 11:00pm reflecting on the day and planning for the next, so we average 5 hours of sleep a night with backbreaking work in between. This pattern has led to the motto “No one sleeps on Kaho’olawe, but they don’t go hungry either.”

We’re not the only ones out there hard at work. There are many other programs on Kaho’olawe in addition to our invasive species removal efforts. Dedicated KIRC staff and volunteers are engaged in a variety of programs that are working to restore the island’s natural balance and preserve traditional Hawaiian customs. 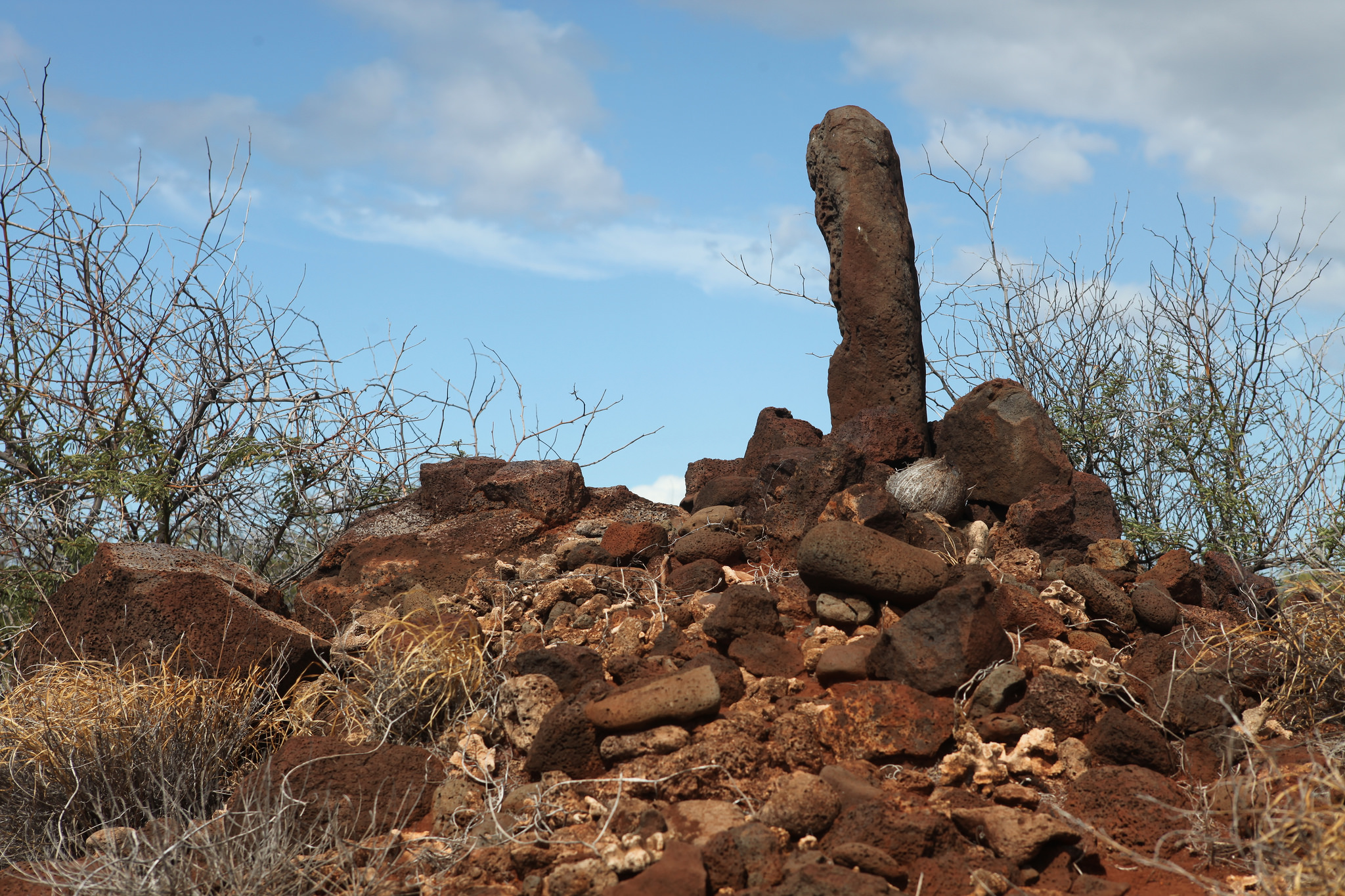 Kaho’olawe Island has a rich cultural history and importance to the Hawaiian people. Important cultural sites, such as this fishing shrine, are the focus of the cultural preservations that we are helping our partners at KIRC support.

A marine program focuses on topics such as marine debris and the appropriate size and season to harvest species of edible fish. A cultural program visits the island’s many significant archaeological sites to maintain them and to practice traditional chants. A restoration program plants native trees in key areas to prevent erosion and loss of topsoil. All these programs require hard work and dedication, resulting in long, hard and very fulfilling days for everybody involved. 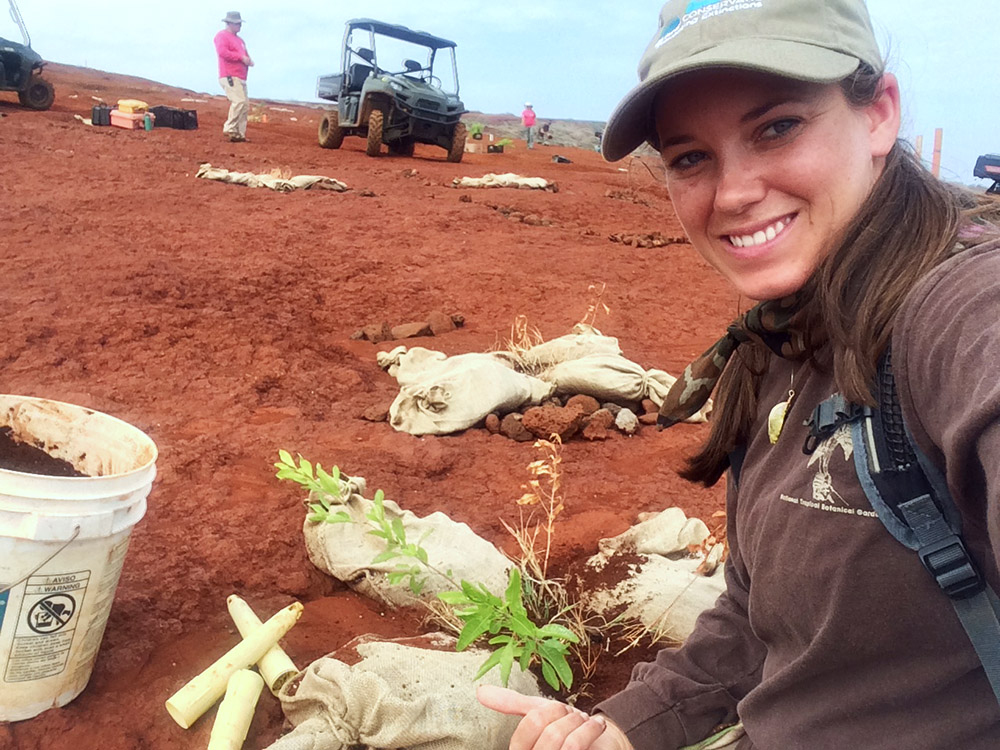 Planting native a’ali’i (Dodonea viscosa) bushes in on one of the most eroded sections of Kaho’olawe. This is an area of the island called Hakioawa that receives a lot of attention and native outplantings to help control erosion and the loss of topsoil. We worked with a large volunteer group that day to plant almost a thousand native grasses and shrubs in planters formed with sandbags to help retain dirt and prevent runoff.

These are the early days of this exciting project restoring Kaho’olawe’s native ecosystem with KIRC, so stay tuned! The experience so far has been challenging, but very rewarding, and I look forward to seeing our work on Kaho’olawe progress.

Aloha and a hui hou (until next time) from the desolate island of Kaho’olawe! 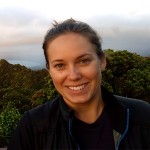 Mele Khalsa received a Bachelor’s degree in environmental biology with an emphasis on botany and a minor in geology from Occidental College in Los Angeles. Prior to Island Conservation, Mele worked at the National Tropical Botanical Gardens (NTBG) where she did invasive species control of animals and plants within the Limahuli Preserve on Kaua’i.