Ian Shive is a conservation filmmaker and photographer. Through his work Shive documents some of the world’s most pristine environments and brings to the public important conservation stories from around the globe. His recent expeditions to the remote marine monuments in the Pacific Ocean were featured in Midway: Edge of Tomorrow, which is included in this interview with Shive, and will be seen in a forthcoming film, Hidden Pacific. Shive is also the founder and CEO of Tandem Stills + Motion, a stock photo and digital asset management firm.

Sara: Why is Midway Atoll important?

Ian: Midway is important—and any island in the Pacific Ocean is important—for many of the same reasons; there’s just not a lot of land in the middle of the Pacific. This habitat is therefore critical for nesting sea turtles, for seabirds. There’s an endless amount of blue but not a lot of land for the creatures that nest to call home. Midway is important on that level but it also is the site of a pivotal World War II battle, the Battle of Midway. It has played such a major role in other historic storylines, from the first cable lines, the first telegraphs that were sent across the Pacific, and of course the Battle of Midway, to the conservation work that’s being done out there. The US Fish and Wildlife Service is working there to restore native habitat, and it’s a tricky thing. How do you find that right balance of respecting our past, and the sacrifice, and the heritage—the history of Midway—while also looking at what’s important for the future of it from an environmental perspective? Midway is unlike any other place in that regard, from a historic perspective as well as what the future holds on a conservation level. It’s not only a national wildlife refuge—it’s also part of the greater Papahānaumokuākea Marine National Monument. 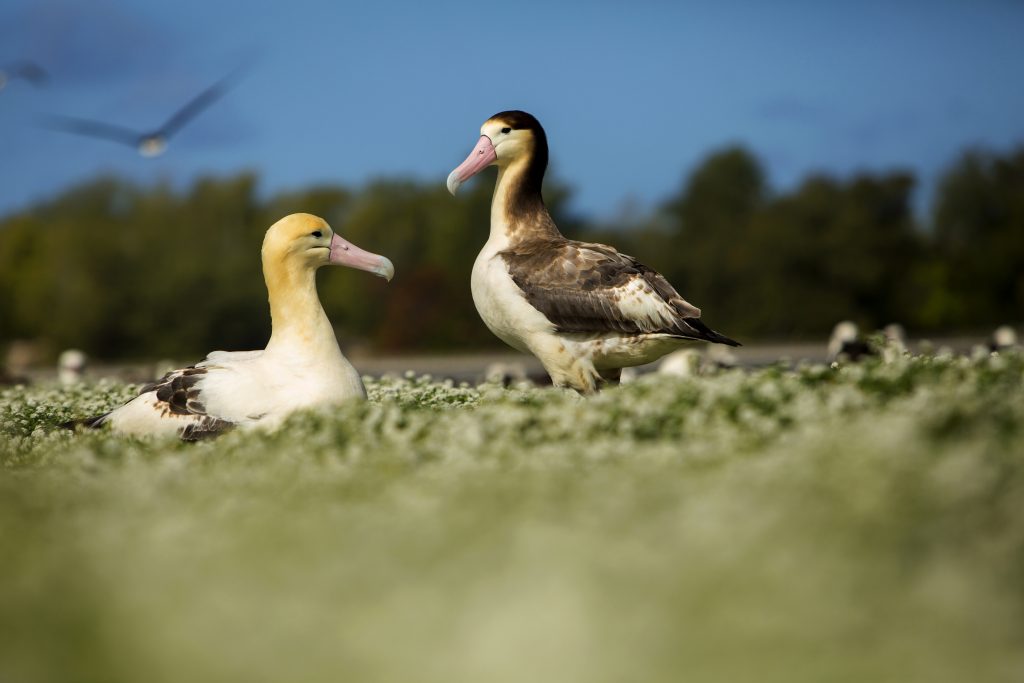 Sara: Who is Wisdom and why is she important to Midway?

Ian: Wisdom is the world’s oldest documented bird—I believe 67 or 68 now—that is continuing to have offspring, which is amazing. In addition to the science and information we’re getting from that, we also find in Wisdom a symbol. She’s a symbol to so many people of the resilience of nature, and helps us to understand albatross lives. The fact that she returns year after year and endures all these changes—67 years ago the world was a very different place, and this bird has been there through all of that. She’s an important symbol—to think that she was born not long after the end of World War II and endures today and is still having new chicks. It’s quite incredible. Laysan albatross are quite incredible in general. They’re one of the few species in the world that are truly monogamous. We’ve never seen an instance in the wild of this bird not staying monogamous to their partner once they’re selected. So you think about their long lives and the challenges—they split up for months and months at a time to go feeding on the ocean, and come back to return to the same spot over and over. The film explores a lot of this—you get to see Wisdom in the film, including the tagging of her chick and where she is, which is right near where a lot of the old military housing is, some of which is still used today. She’s kind of right in the middle of it all. We do explore the albatross mating dance—they have 25 moves that they basically mimic, and when they find a bird that can exactly mimic their moves, that’s their partner. When they’re on the island—they’re gone three months of the year but there the rest of the time—every several steps there’s a bird. You can walk more or less right up to them. A lot of the time when you’re filming you’re just sitting out on the field with them, and they’ll come up and try to pull on a zipper and check things out. They’re very curious and inquisitive. They’re quite endearing. You can tell the amount of affection they have for each other and for their young—their body language is pretty powerful. After spending a couple of weeks there, I think it’s what I enjoyed most about Midway. 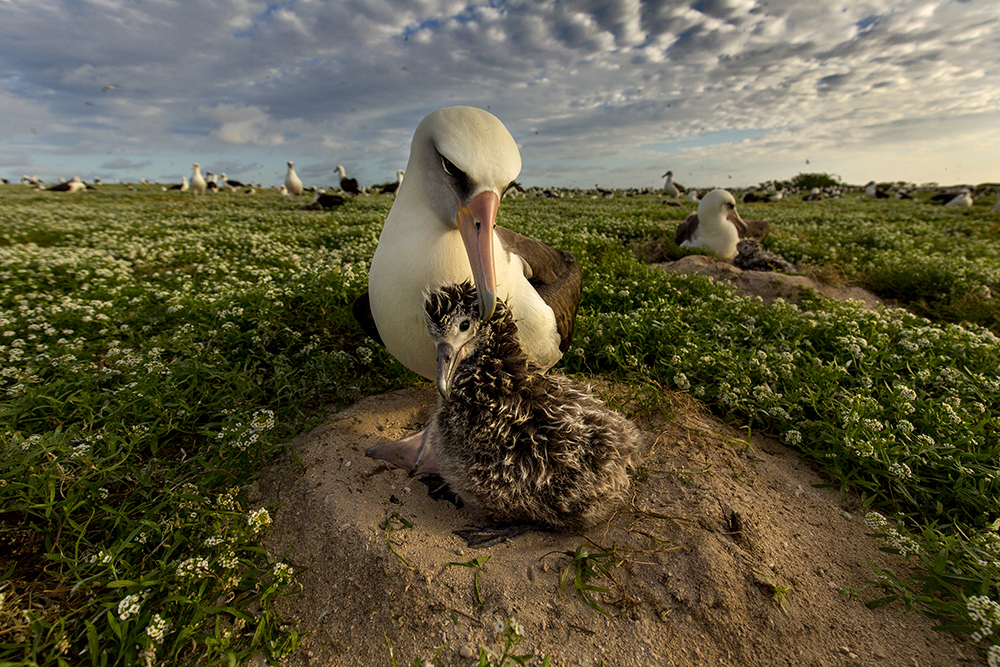 Laysan Albatross with juvenile on Midway Atoll in the North Pacific Ocean. Midway Atoll National Wildlife Refuge encompasses over 590,000 acres and is part of the larger Papahānaumokuākea Marine National Monument. This photo is part of the upcoming film Hidden Pacific. Credit: Ian Shive

Sara: What are some of the threats on Midway to albatross and other wildlife, and what conservation efforts are in place to manage those?

Ian: One challenge for Midway—and a challenge worldwide—is the plastic issue. When the albatross go out on those long forays, they’ll go for months at a time skimming squid and other seafood off the surface of the ocean and, unfortunately, too often they’re skimming plastic off the surface as well. Many albatross on the island die from the amount of plastic that they’ve ingested. Their stomachs are completely full of it. US Fish and Wildlife Service is doing as much as they can on the island to mitigate the amount of plastic that’s there. They do plastic cleanup days and they have piles and piles of plastic, but the albatross bring 5 million pounds of plastic a year to Midway in their stomachs. If you think about how much plastic that is, it’s devastating. That, to me, was unbelievable, especially when you consider that the birds are not that big. It takes a lot of work to remove that plastic.

There’s also a challenge with mice on the atoll. We saw mice and the impacts they have on the birds—you can see marks on their chests and feathers, as well as bleeding. The albatross have a tough run in that regard. It’s definitely tough but there’s a lot of good work being done out there, including native plant restoration and other ongoing efforts to manage this important place that many wildlife depend on.

Sara: What would Midway look like if there were no human conservation intervention efforts taking place?

Ian: I’ve always been sort of torn on that. I don’t think we can leave places entirely alone and expect them to be okay. The human footprint is global whether we like it or not. I have been on many of the remote islands and atolls of the Pacific and, no matter where you go, even the places that have never had permanent human settlements or visitors, research or otherwise, have human impact. So I think because of our impact there always needs to be some degree of management action to maintain. 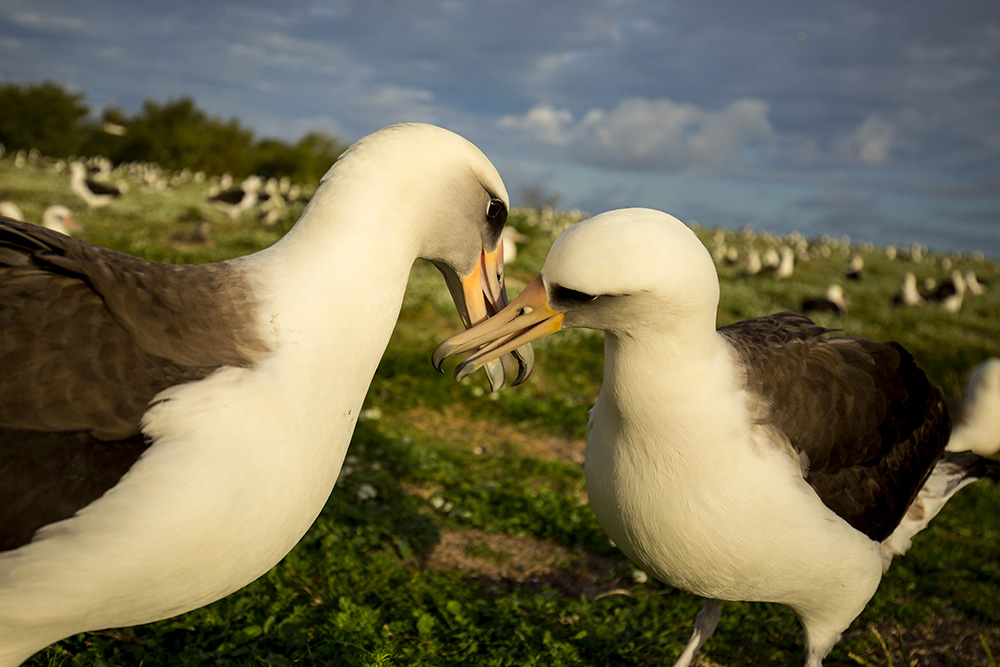 Sara: What would you say is promising about conservation efforts on Midway and why would you encourage people to watch that space?

Ian: I think what’s promising about conservation on Midway is that there are a lot of organizations that take an active role, such as yours. I think it’s great that we have so many different voices and information and science to support what management actions make the most sense. I think the most promising was the expansion of the marine monument by President Obama in 2016. Midway plays a role in a much larger ecosystem and in an even greater conversation, which is the marine national monument. Midway is a vital piece of a larger puzzle. The ocean may seem vast—and it is—but it also means we need really large areas to be protected because that’s what it takes—that’s the minimum it takes to see them persist into the future. You have to have these big areas protected because they are the lungs of our planet—the organs of our planet. So Midway is a snapshot of that. It’s the place where as humans, as researchers, as conservationists, as members of organizations like Island Conservation and the US Fish and Wildlife Service, we can actually go and walk around. We can get on boats and put on dive tanks and go below the surface. But the vastness of the ocean and what is required to sustain it is something we’re not able to fully understand. People are so quick to focus on land but it’s not just a piece of land—an island is the land and the ocean is the connector. To me that’s what’s most promising—to see people recognizing that. To see the idea of connectivity between all of these places—islands and mainlands—with the ocean acting as that bridge. Here in LA I’m connected to Midway by the Pacific Ocean. I think that the more we start to see that, the more hope there is in making good and informed decisions.

Ian: It’s really important to understand the balance of human impact and history of the environment. Midway is probably the best touchstone we have in understanding that, because of its history and the work that’s currently going on out there. It really is a window into that world that allows us to see the potential that we have. To come back from a battle and to have so much opportunity for the future of the environment is pretty profound. I’m very lucky to have had the opportunity to travel there and be able to take other people there through our films and photography. It’s closed to visitation, and rightly so. It’s such a small and sensitive place—there’s a bird every 18 inches clapping its beak at you. It’s good that people can’t physically see it in that way, but they can experience it through film. I’m honored that through film and photography we’re able to give people the opportunity to “visit” this part of their public lands. It’s a National Wildlife Refuge and a marine national monument. So, I feel I have a pretty big role. I take it very seriously. I’m really grateful and hopefully I’ll do it justice.

Access Midway: Edge of Tomorrow through the following streaming platforms: iTunes, Google Play, and Amazon Prime. Learn more on their website at www.tandem.film.