The Hawaiian Micromoth, more commonly referred to as a Leaf Miner, is approximately the size of a human eyelash. They belong to the genus Philodoria of which there are 40 known species that live inside the leaves of a plant. The micromoths burrow through the leaves of the plant until they emerge to complete their metamorphosis. 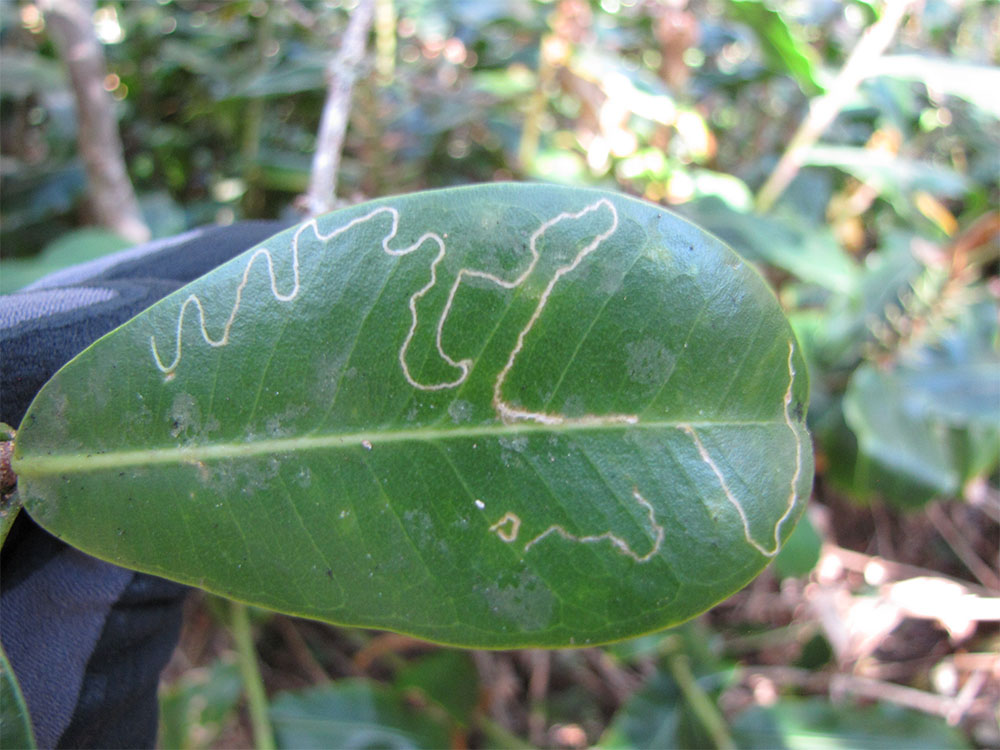 The white lines are evidence of a Leaf Miner burrowing through the leaf. Photo: Forest and Kim Starr.

In Hawai’i, there are 12 endemic plant species on which these micromoths feed and many of these Philodoria species only feed on one specific plant species. Chris Johns, a Ph.D. student at the University of Florida, has helped to discover a dozen new micromoth species during his research of the Leaf Miners. He noted:

It’s not typical that you find an organism where each species is so specific but all of the relatives as a whole feed on so many different plants. And we’re not entirely sure why that has happened.

In studying the Philodoria, Johns and other researchers discovered that many of the endemic plants the Leaf Miners use are in fact endangered. This constitutes a significant threat to the micromoths: they are being driven to extinction due to loss of their host plants.

Invasive species in Hawai’i have the ability to reduce native plant populations and one of the plants the micromoths eats has a population that has dwindled to as little as 50 wild plants. Invasive varieties that out-compete the native vegetation present a difficult task for conservation biologists and botanists, but they are nonetheless working to find and protect populations of these native plants. In the search for plant life, Johns and his team were able to find evidence of leaf mining activity on isolated populations of these plants. This shows promising signs for the conservation of the vegetation and micromoths.

Conserving the native vegetation that micromoths rely upon is crucial to stop and potentially reverse the effects that have impacted this food chain. These moths might be small, but they face a big issue when it comes to conservation.