Researchers discover that the Red-Bellied Pitta; once believed a single species of bird is actually thirteen unique species.

Question: What do thirteen brightly colored bird species have in common?
Answer: Not much beyond their vibrant feathers.

This is a big surprise to researchers who have long believed that the Red-bellied Pitta was a single species that was spread throughout Southeast Asia. However, recent studies reveal that the birds thought to belong to the same species actually comprise 13 different species.

Researchers recently realized that the birds, although similar in appearance, are distinctly different species–and this poses a problem for conservation. When all of the species were thought to be Red-bellied Pittas, there was little concern for their populations, but take a healthy population size and divide that by 13, and suddenly there is a problem.

In total, it is established that three of these bird species are globally threatened and one is categorized as Near Threatened. Nigel Collar, a Leventis Fellow in conservation biology with BirdLife International explained:

The birds do look alike but there are significant differences between individual taxa.

The discovery of this speciation was made in 2013 when a group of geneticists published a paper suggesting that the birds could actually be 17 different species based on their genetic diversity, and had wrongly been considered Red-bellied Pitta. Genetic variation does not always tell the full story; the ability for two birds to breed, as well as other physical factors, can play a large part in the determination of speciation. This new information sparked intrigue among researchers such as Collar to take a deeper look.

We sat down in the British Museum and got out all the specimen and evaluated these slightly different or fairly different subspecies…So you’re comparing the differences: maybe one has a big bill and another has a small bill; a large wing or a short wing.

This team of researchers examined the physical differences among the birds and compared all of them in conjunction with data published by Dutch bird researcher Johannes Erritzoe. They used a quantitative method called the Tobias criteria that BirdLife International has developed. This helped them to determine that the birds are in fact different species, but with a grand total of 13, not 17, as the previous study had suggested. 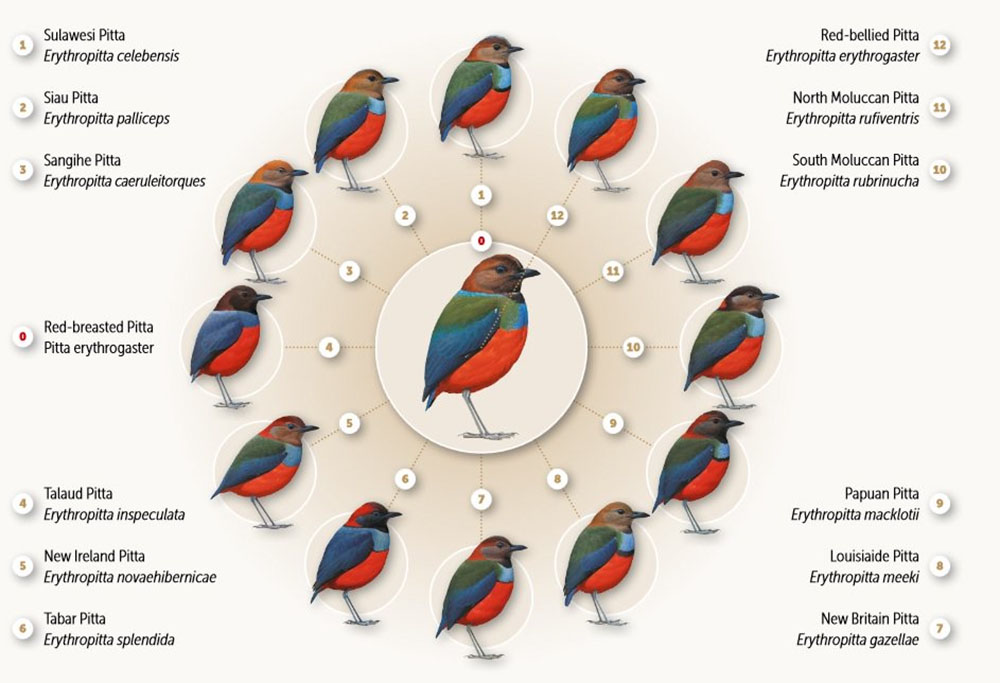 The original red-bellied pitta was assessed as being of Least Concern because of its range and numbers, but now we know that what we once thought was one species is actually several species scattered across the archipelago, some of which are in danger of extinction. Thanks to this split, we can now identify which of these species are in need of conservation help.

Research advances like this give conservation a greater understanding of the species that are at risk and give hope to the efforts to protect them for future generations. The ability for scientists to understand species at genetic level is a newer development that will go on to help the conservation of species in the long run. Now, by understanding the differences between these 13 species, it is possible to develop methods to protect the three species that are threatened and prevent the other 10 species from population declines.