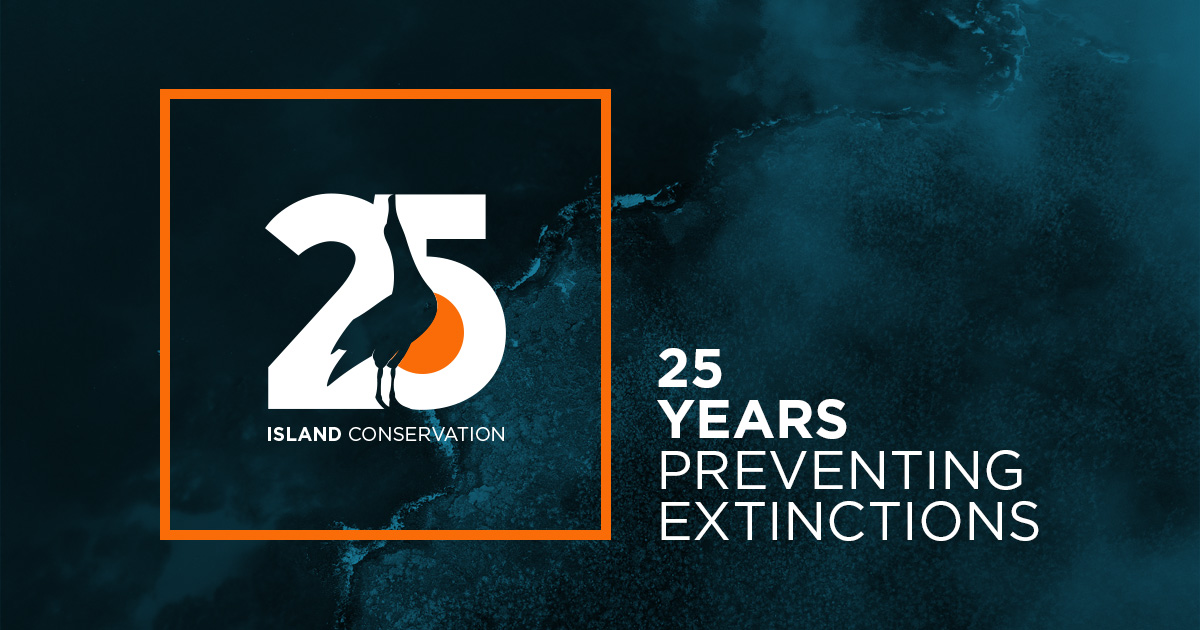 In 2019, Island Conservation and our partners broke new ground and surmounted new challenges in preventing extinctions.

This year, Island Conservation celebrated 25 years of preventing extinctions with a dedication to on-the-ground conservation and finding new and innovative solutions. It has been a year full of successful conservation stories and here are just a few of the highlights.

In January 2019, the Directorate of Galápagos National Park (DPNG), Island Conservation, and Massey University in New Zealand reintroduced almost 2000 Galápagos Land Iguanas to Santiago Island. Over 180 year ago, these iguanas once roamed free on Santiago Island providing pivotal ecosystem services including seed-dispersal. The iguanas were last recorded on Santiago in 1838 by Abel du Petit-Thouars and by Charles Darwin in 1835 but were driven locally extinct due to competition with invasive species. Since then, the only signs of these iguanas have been skeletal remains. The reintroduction was a pivotal step in the ongoing restoration of Santiago Island. Learn more.

Seymour Norte Island is home to some of the Galápagos’ most iconic species including Blue-footed Boobies, Magnificent Frigatebirds, and Swallow-tail Gulls, which are the only nocturnal gull on the planet. In early 2018 when invasive rats were detected on the island, it was clear that they posed a major threat to the survival of these native species, but the question in mind was how to remove them. Historically, this has required shipping helicopters and specially trained pilots to remote islands, but for a small island such as Seymour Norte, drones could be used as a more cost-effective solution. In February, Island Conservation and the Directorate of Galápagos National Park successfully implemented the project. Learn more.

Teuaua is once again safe for the more than 90,000 sooty terns that nest on the island annually following the removal of invasive rats. This is the first successful project of its kind in the Marquesas and demonstrates that removal of invasive rats is possible in the region. This success is seen as an important stepping stone to much larger, more complex restoration projects in the region such as Hatuta’a and Mohotani. Restoration of these islands would remove the threat that invasive species pose to four endangered terrestrial bird species and two endangered seabird species that call the Marquesas home. Learn more.

Chañaral Island once hosted the world’s largest Peruvian Diving-petrel breeding colony, with an estimated 100,000 breeding pairs, but this population was extirpated in the 1940s following colonization of the island by non-native foxes and rabbits. Today, there is no evidence that the petrels breed on Chañaral Island, despite the island being free of invasive species and safe for breeding once again. In September 2019, a team from Island Conservation and Chile’s National Forestry Corporation set up two speakers, a solar panel, and an mp3 player with a looped recording of Peruvian Diving-petrel vocalizations as well as 31 artificial nests to attract the seabirds. On a return trip the next month, our partners at CONAF discovered footage that shows petrels returning to Chañaral on the very night our teams left the island. While it may take time to see these birds nest and rebuild the colony, this is a sign of hope for recovery on the island. Learn more.

The Monito Gecko: Saved by the Endangered Species Act

In October 2019, the Monito Gecko—a small reptile endemic to Monito Island, Puerto Rico—joined the ranks of the Bald Eagle and the Brown Pelican and was officially delisted under the Endangered Species Act (ESA). In 2016, Island Conservation joined the US Fish and Wildlife Service and the Department of Natural and Environmental Resources of Puerto Rico on a monitoring trip to Monito Island to determine the population of the Monito Gecko. Today, there are an estimated 7,600 geckos on the Island—a population stable enough to warrant delisting, making the Monito Gecko the first Caribbean endemic species to be delisted under the Endangered Species Act. Learn more.