The Critically Endangered São Tomé Grosbeak is the world’s largest species canary but on the São Tomé Island invasive species create an uncertain future for the bird.

Hidden in the rainforests of São Tomé Island, Gulf of Guinea, West Africa a brown and grey bird with a large, parrot-like beak forages for fruit. The bird in question, a São Tomé Grosbeak (Crithagra concolor), is the largest canary on earth but until recently, it was believed to be a species of finch.

Although this canary is small compared to many bird species – only measuring 20cm long – it is considered very large as far as canaries go. The São Tomé Grosbeak is ranked by the IUCN as Critically Endangered. Invasive predators such as rats on their home islands, along with habitat loss threaten this species. The extent of these threats is not completely understood. 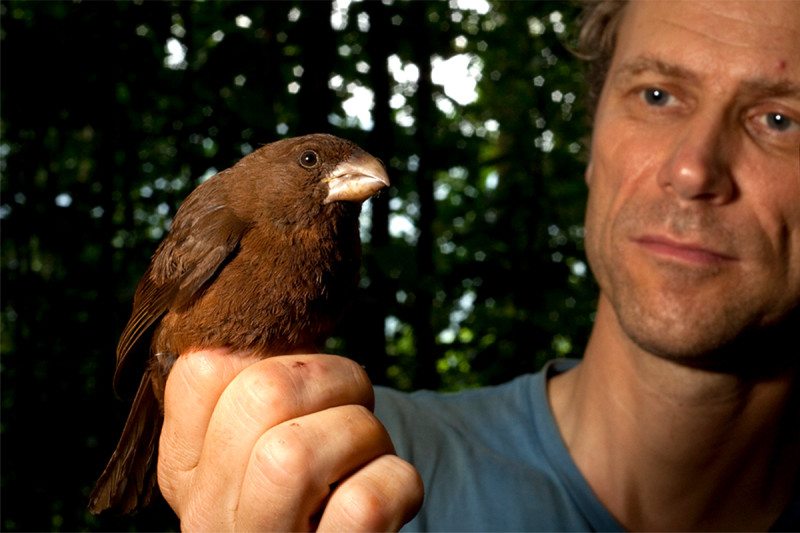 The São Tomé Grosbeak (Crithagra concolor) was once believed to be a species of finch but is actually a very large species of canary. Credit: Alexandre Vaz

The species was first studied in 1888. At the time researchers decided the flat head and large beak warranted categorization in its own genus called Neospiza, which means “new finch.” This was the accepted genus of the species until Martim Melo, a researcher from University of Porto, Portugal collected four individuals and analyzed their genetics. The species actually belongs to the genus Crithagra and its closest relative appears to be the Crithagra rufobrunnea, which is native to the nearby Island of Principe.

The Grosbeak’s large, parrot-like beak and size are believed to have allowed the species opportunities for food and foraging that their close relatives lacked. Melo commented:

Probably the grosbeak was already slightly larger and selection favored the increase in bill size, allowing it to explore resources that are inaccessible to the smaller Crithagra rufobrunnea.

Very little is known about the species’ natural history and behavior but protection from invasive species and other potential threats is crucial in ensuring the future success of this Critically Endangered bird.

More than 140 native bird species, 20 of which are endemic, can be found on São Tomé Island and Island of Principe. Of these, three are considered giants within their families and one is considered to be a dwarf. The evolution of these species over the past million years has contributed to the unique ecosystems found on the islands. Here, bird diversity is important to the current and sustained health of the native ecosystems. Continued research will shed more light on the adaptations these species have to the islands and the effects that invasive predators have on their future success. Hopefully, this large canary has a bright future ahead.