Conservationists around the world are celebrating as V106 is the first of 46 translocated Laysan Albatross chicks to return to the James Campbell National Wildlife Refuge.

She may not have a name, but her number is significant – V106. She is the first of 46 chicks that were translocated from Kauai to Oahu to return as an adult. Her return is an important milestone in the founding of a new Laysan Albatross colony at James Campbell National Wildlife Refuge (James Campbell Refuge) in Kahuku.

V106 hatched three years ago and was raised inside a new predator proof fence on the refuge. After flying out to sea on June 30, 2015, she has returned to the refuge after having spent the last three years wandering the North Pacific Ocean.

She was atop the hill where the decoys and speakers are located, standing quite calmly in a bed of native coastal plants.” Seeing the first of the hand-reared chicks return as an adult in its new home is “a long-awaited reward and confirmation that our project continues to reach its important milestones.” 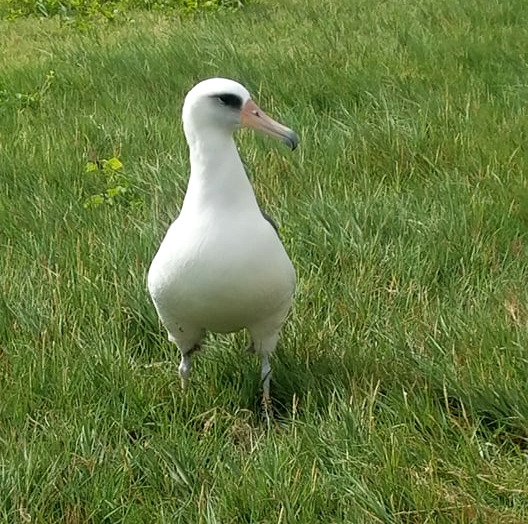 V106 is the first of 46 translocated chicks to return to the James Campbell Refuge. Credit: Pacific Rim Conservation

Albatrosses at the Pacific Missile Range Facility (PMRF) on Kauai nest near an active runway, where their 6-7 foot wingspan poses a collision hazard with aircraft. In partnership with the U.S. Navy (Navy) and the U.S. Fish and Wildlife Service (USFWS), PRC moved eggs from nests that were creating an aircraft strike hazard and brought them to a protected fenced area within a newly acquired coastal dune ecosystem at James Campbell Refuge on Oahu.

Our Navy’s Environmental Department here at PMRF has been working closely with Pacific Rim Conservation to create the best opportunities for Laysan Albatross survival while also protecting pilots on the PMRF airfield.  As responsible stewards of our natural resources, PMRF is proud to be a partner with Pacific Rim Conservation and USFWS to reduce the bird hazard to our airfield, and at the same time help repopulate the albatross colony on Oahu,” said Captain Vinnie Johnson, Commanding Officer of Pacific Missile Range Facility.

Each year in December, eggs are flown by the Navy from Kauai to O‘ahu and incubated at the PRC office until late January of each year. Before hatching, the eggs were placed at Ka‘ena Point Natural Area Reserve for a month with temporary foster parents, whose natural egg was infertile, so that the chicks would imprint on the correct species. At one month of age, just before albatrosses are thought to imprint on the location they view as home, the chicks were moved to James Campbell Refuge.

James Campbell National Wildlife Refuge provides essential habitat for native and threatened and endangered species,” said Jeff Burgett, USFWS Acting Refuge Manager, James Campbell National Wildlife Refuge. “This project demonstrates the difference we can make for wildlife when we restore habitat and provide predator free nesting habitat for species at risk from being preyed on by invasive species like cats, rats, and mongoose.” 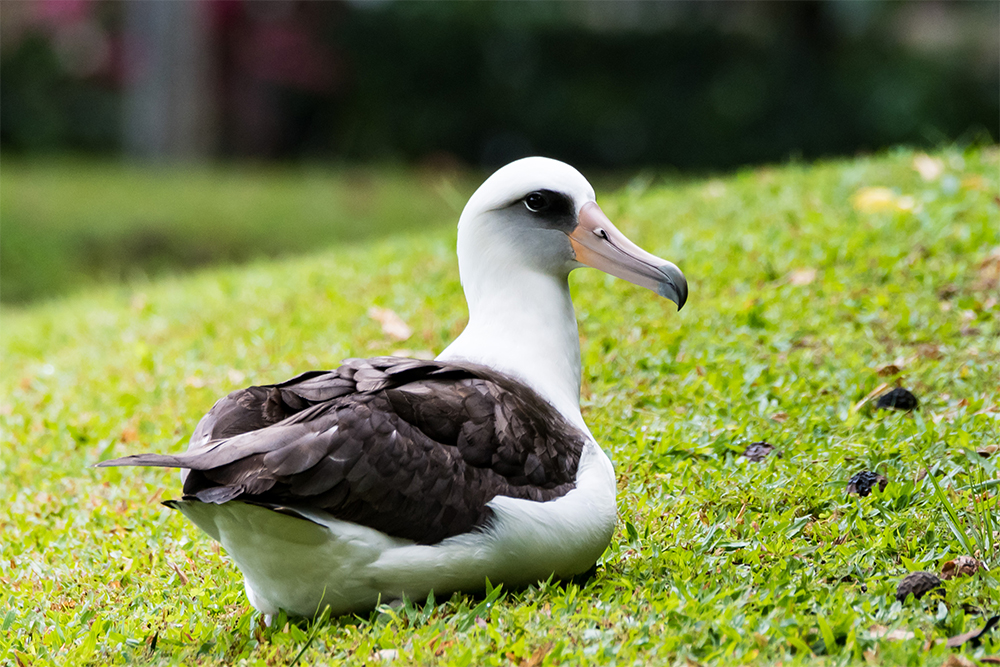 From February- July of each year, the chicks were fed a slurry of fish and squid by PRC’s aviculture team who closely monitored their weights and wing lengths to ensure their health. The young birds spend their first few years at sea and were expected to begin returning to the refuge in 3-5 years, and to start nesting on the refuge in 5-8 years.

Many other wild adult Laysan albatrosses have visited the refuge over the past three years as a result of a social attraction project. The project uses speakers and decoys to tempt birds in to visiting and potentially nesting on the refuge. A pair of wild adults nested on the refuge for the first time earlier this year.

The return of V106 marks a milestone toward the long-term success of this project” said Eric VanderWerf of Pacific Rim Conservation. “We hope this bird and others will continue to return and begin breeding at the refuge in the next several years.”

Seabirds face a myriad of threats – from fishery interactions and marine debris to invasive species and shrinking habitat. Safe places like James Campbell Refuge, where seabirds can rest and raise their young, are critical for their ability to survive into the future. 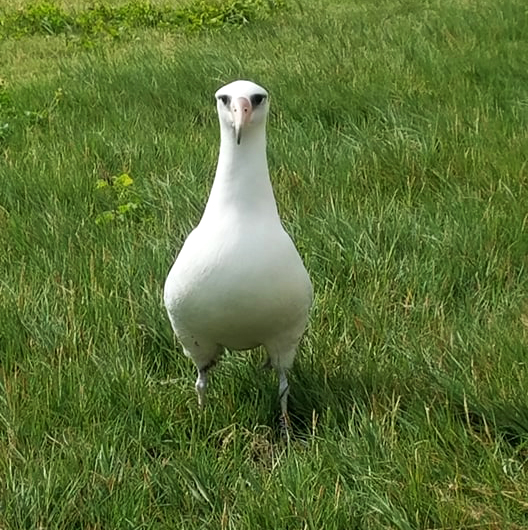 The three-year old Laysan Albatross will not nest for another 2-5 years but her return is an important milestone for the project. Credit: Pacific Rim Conservation

Albatross are threatened by sea level rise associated with global climate change. Recent storm surges have wiped out thousands of albatross nests with eggs or young chicks in the Northwestern Hawaiian Islands,” said VanderWerf. “By thinking proactively and working together to establish more secure colonies on high islands within the historical nesting range of the Laysan albatross, we can ensure a future for these birds.”

The seabird project at the James Campbell Refuge is a tremendous example of how we work across agencies to make a difference for Hawaii’s wildlife,” said Mary Abrams, USFWS Field Supervisor, Pacific Island Fish and Wildlife Office.  “Partnerships like these are key to successfully protecting and recovering Hawaii’s native species.”