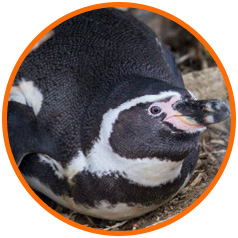 Choros Island is one of the three islands that make up the Humboldt Penguin National Reserve, situated 600 km (372.8 miles) north of Santiago, Chile. The reserve is managed and protected by CONAF. Choros Island covers 301 ha. The vegetation on Choros Island is comprised mainly of cactus, herbs, and low-growing shrubs.

Invasive rabbits on Choros Island are destroying the ecosystem by occupying seabird burrows, increasing erosion, and browsing on vegetation. Humboldt Penguins depend on intact burrows for nesting, while smaller seabirds use vegetation and burrows for hiding in order to avoid native predators. In July 2013, Island Conservation and local partners began assisting the Chilean Forestry Corporation (CONAF) in removing invasive rabbits from Choros Island.

In January 2014, after extensive monitoring, the partners announced the successful removal of invasive European rabbits from Choros Island. Now free of this invasive pest, the island’s native plants and animals have an opportunity to recover. Early observations on the island suggest changes may already be taking place. The scientists observed vast swathes of healthy seedlings, hillsides covered in the Alstroemeria philippii, and Peruvian Diving-petrels investigating nesting sites in former rabbit burrows.

This project is an essential part of a larger effort to restore the region’s island ecosystems to support local marine and tourism economies, food security, human well-being, as well as the preservation of biodiversity and the region’s natural heritage.

A SECOND CHANCE FOR NATIVE SPECIES 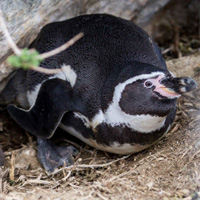 Humboldt Penguins are only found along the Pacific coast of South America, where they thrive in the cold, nutrient-rich waters of the Humboldt Current. Approximately 1,700–2,000 pairs of Humboldt Penguins make their nests in dugout bowls under cacti and other vegetation. Invasive European rabbits were competing with the penguins for limited burrow space, causing the continued decline of this population on Choros Island. Removal of invasive rabbits from Choros provides critical breeding habitat for the penguin. 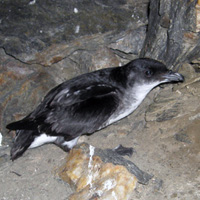 The Endangered Peruvian Diving-petrel is also only found in the Humboldt Current region off Peru and Chile. Once abundant and widespread, the Peruvian Diving-petrel’s population has been greatly diminished by the impacts of guano harvesting, which destroys their breeding habitat. As guano harvesting is not a problem on Choros, this island is the ideal site for the recovery of this threatened species in the absence of invasive rabbits. 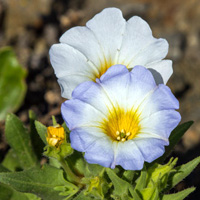 Choros Island is an important site for conserving native Chilean plant species, such as native cactus, herbs, and shrubs, including threatened species like Alstroemaeria philippii, Loasa elongata, and Tetragonia ovata. Invasive European rabbits devoured native plant life and facilitated the expansion of invasive plants. In the absence of rabbits, scientists have already observed vast swathes of healthy seedlings and hillsides covered in the Alstroemeria philippii. 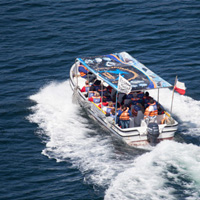 Nearby fishing communities have developed a growing eco-tourism industry focused on the unique biodiversity found in the reserve. Eco-tourism offers a sustainable future for Choros’s native plant and animal species. Establishing the Humboldt Penguin National Reserve as an eco-tourism site ensures the protection of threatened species, such as the Vulnerable Humboldt Penguin and Endangered Peruvian Diving-petrel.

PROJECT MISSION
To protect the globally threatened seabird and plant species that depend on Choros Island.

PROJECT VISION
The island’s native species are thriving and free from the threat of invasive species.

THE PROBLEM
Invasive European rabbits are destroying nesting habitat for penguins and petrels and devouring the island’s vegetation.

THE SOLUTION
In support of work led by CONAF (the Chilean government agency responsible for protected areas and forest management), Island Conservation, local community leaders, and scientists worked together to restore populations of native species on Choros Island by removing invasive rabbits.

WHY MEASURE OUR IMPACT?
By comparing the population size of animals and plants before and after removal of invasive rabbits, we can measure the impact that our actions have in restoring key habitat and threatened species, such as the Endangered Peruvian Diving-petrel and Vulnerable Humboldt Penguin. Monitoring our impact ensures that island restoration efforts are successful, imperiled species are protected, and ecotourism continues to develop. 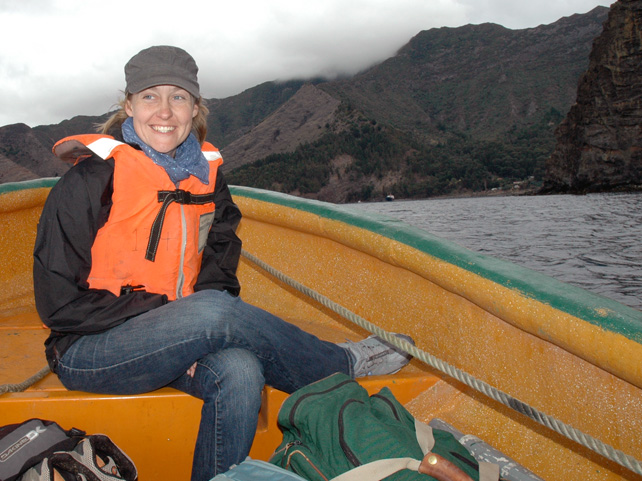 Erin earned her MS and PhD from the University of Washington, Seattle. She brings more than ten years of endangered species and conservation experience working on islands throughout the Pacific. Her research has focused on examining ecological and genetic relationships of critically endangered island birds to guide management actions in systems threatened by invasive mammals and plants. Evidence of her work includes collaboration with the Chilean National Park Service in implementing and comanaging Chile’s first habitat-restoration program within a national park—a program that is now in its eighth year. Erin’s experiences living and working on remote, inhabited islands make her an invaluable member in advancing restoration action on islands with permanent human communities.