The Critically Endangered Orange-fronted Parakeet faces extinction if conservation and education efforts do not catch up to the rapidly declining population.

Rarer than the Kiwi but far less recognized, the Orange-fronted Parakeet is facing extinction. This and many other little-known New Zealand native birds are at risk of extinction due to the threat of invasive predators such as rats and stoats. It’s not that these birds are less in need of conservation, it’s just that some charismatic species receive more attention that others.

The Orange-fronted Parakeet is one species that has suffered from a lack of direct conservation interventions. The species was once spread throughout New Zealand but hunting and invasive species have brought the population to 150-200 adults found only in Canterbury. 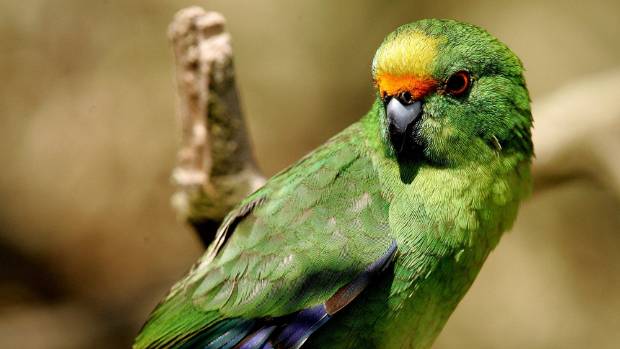 The Orange-fronted Parakeet – found only in Canterbury – is down to just 150 to 200 adult birds. Credit: David Hallett

Since 1995 there have been efforts to secure populations on predator-free islands, but so far these have been unsuccessful. Invasive species removal and captive breeding programs are key to saving the species and returning it to its former abundance. Captive breeding efforts have been successful in maintaining genetic diversity, which is promising for the future of the Orange-fronted Parakeet.

Conservation efforts are vital but so is recognition of the species. Kiwi once faced an uncertain future and likely extinction, but due to protections and conservation gained through wide recognition, they are rebounding and have recently been downlisted. Hopefully growing awareness of the Orange-fronted Parakeet can yield a similar success.