Along the shores of New Zealand’s wetlands and mangroves the small footprints of an elusive and rare bird are an exciting find. The bird in question is a Banded Rail that lives and feeds along marsh, wetland, and estuary shorelines. Throughout New Zealand the Banded Rail is considered to be “declining,” making a sighting in the Te Atatu wetland in west Auckland for the first time exciting to say the least.

Populations of the Banded Rail began to decline in the 1930s due to the presence of invasive predators and habitat conversion. Conservation of the wetland habitat and increased protection from invasive species such as feral cats and rats are important for the recovery of the species. 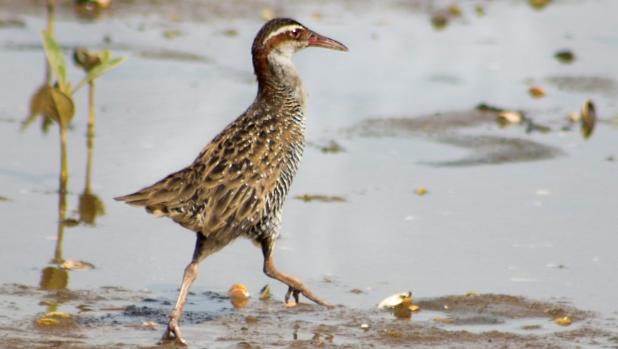 Although researchers had believed the Rail lived in the Te Atatu area, a recent camera trap made the first confirmation of the bird. Senior biodiversity advisor at Auckland Council, Ben Paris commented:

They are a secretive, rather camouflaged bird, and usually don’t venture far out into the open–the best chance of seeing one is along the edge of mangroves at low tide…Their footprints are more often seen then the bird themselves. 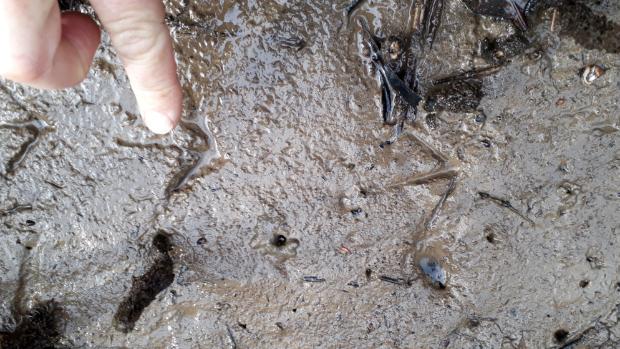 Other than the video footage confirming their presence in the wetlands, there were also banded rail footprints in the salt marsh. Credit: Oscar Thomas

Verifying the presence of the Banded Rail is exciting news for the Te Atatu wetland since the bird requires a diversity of food they are considered an important indicator of ecosystem health. The Te Atatu Peninsula is also known as a valuable wildlife corridor that is vital to the health of ecosystems across Auckland. Paris explained:

Making sure this banded rail habitat is healthy, safe and connected is essential to help these birds move freely across the Auckland region.

Conservationists are encouraging pet owners to keep cats indoors to prevent predation on the Banded Rail. Protecting the species from invasive predators and preserving their wetland habitats are crucial steps toward expanding their currently declining population.