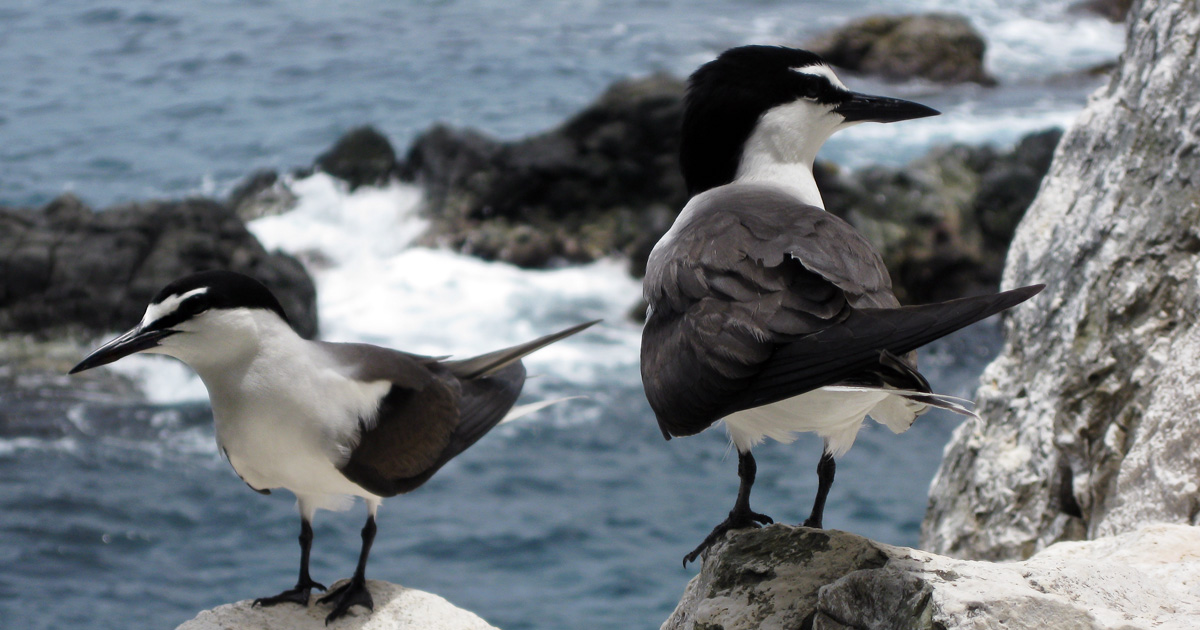 After the successful removal of invasive species from Desecheo and Chañaral Islands, Island Conservation and our partners are using social attraction to restore long-lost seabird colonies.

Invasive species are one of the leading threats to seabird colonies around the world–predating eggs, chicks, and adults while destroying native vegetation. Luckily, removing invasive species from islands is one of the most effective conservation actions available today and has been proven to restore islands and prevent the extinction of wildlife. Following restoration, many islands recover as if overnight, but seabird colonies that disappeared almost a century before sometimes require additional intervention including social attraction.

Island Conservation and our partners have begun implementing social attraction projects on islands now free of invasive species, in hopes of restoring thriving colonies that were lost due to invasive predators. Social attraction including the use of seabird calls and decoy seabirds encourages native birds to come to the island that is once again safe for nesting.

The removal of invasive species made Desecheo into a new Island: more seabirds and land birds are present and there is significant growth of new vegetation in areas where it was once mostly bare ground.”

Desecheo Island was once a major nesting area for thousands of seabirds which blackened the sky above like a perpetual storm cloud. Introduced invasive species devastated the seabird population, but thanks to a groundbreaking restoration project in 2016, the birds are now returning to their native home.

Our team is bringing seabirds back to Desecheo using social attraction including Bridled Tern decoy colonies and recordings of Audubon’s Shearwater calls to attract these species to the island.

In 2019, we documented an Audubon’s Shearwater visiting the island on a nightly basis—an exciting result as this species had never before been recorded on Desecheo. The team also documented several Bridled Tern eggs in areas where nesting activity was not common in the past. Additionally, Brown Noddies, American Oystercatchers, Frigatebirds, and Brown Boobies are once again thriving.

After a second year of success Island COnservation’s Jose Luis can see his team’s efforts paying off: “Seabirds are returning to Desecheo and we’re hopeful that one day in the not too-distant future we’ll have an island full of activity.”

It has been incredible to see the population of Peruvian Diving-petrels increase on Choros since the removal of invasive rabbits, but I am even more excited that this resilient population will also help us to restore the population expelled from Chañaral Island.”

After the removal of invasive rabbits from Choros in 2013, Island Conservation’s Coral Wolf returned to study the recovery of Chile’s largest Peruvian Diving-petrel population.

The petrels are thriving. Coral’s team documented an estimated 50,000 breeding pairs—six times the number of pairs when invasive rabbits were present. The number of overall colonies has tripled and the growing population shows the dramatic effect that conservation interventions can have for seabirds on the brink.

In late 2019, Island Conservation’s Maria Vilches began restoring seabirds to nearby Chañaral Island, which was freed of invasive vertebrates in 2017. Chañaral was once home to a thriving petrel colony, but invasive vertebrate species put an end to that breeding population, and none breed there today.

Island Conservation has initiated a social attraction project using recorded petrel calls from Choros to help restore the population on Chañaral. Recolonization will help make this endangered species more resilient to future threats and further the recovery of the global population of Peruvian Diving-petrels.

The restoration of Choros and Chanral Island was completed in partnership with Corporación Nacional Forestal and Universidad Católica del Norte. This project was made possible by funding from American Bird Conservancy and the David and Lucile Packard Foundation.