MacGillivray’s Prions on Gough Island are facing a high rate of breeding failure because of predation by invasive mice. Conservationists are working to solve this problem and prevent the extinction of native seabirds.

MacGillivray’s Prions (Pachyptila macgillivrayi) breed in Prion Cave on Gough Island from November though to April and during this time the Gough field team make regular visits to Prion Cave to monitor their success. The data collected this season, like many before, shows the catastrophic effect mice have on this species. Here we tell the tale of each nest monitored over the last 10 weeks. 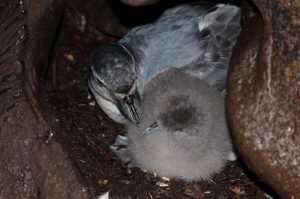 A healthy Prion chick being brooded by its parent. Credit: Jaimie Cleeland

A single egg is laid sometime from late November to early December. The egg weighs 30g, which is impressive for such a small seabird (140-230g). At this time the field team are making weekly visits to read the metal identification rings of breeding adults to follow their individual breeding success or failure. 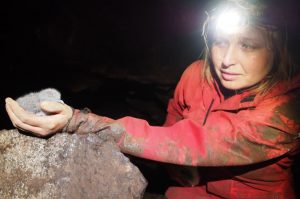 Eggs are incubated for approximately 45 days before hatching in early-mid January. However, this season 33 out of 68 eggs did not hatch. Invasive mice are likely to be a contributing factor to the high failure rate of eggs. Mice chew marks were seen on several broken eggs. Eggs may also fail as inexperienced breeders or breeders in poor body condition abandon their nests leaving the egg unattended. Under normal conditions and with good provisioning, the small chicks would grow fast after hatching and fledge from the nest at the end of March, heading to sea for the first time. 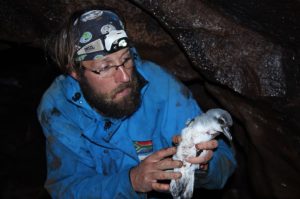 But this season, the signs of mice attack were obvious; several chicks were found alive with open wounds, while the majority were found dead on the nest. No chicks survived beyond 11 days. However, most mortalities occurred within 4 days of hatching, 51 days shy of fledging. With consistently low chick survival the MacGillivray’s Prion population on Gough Island is in peril. The eradication of mice cannot come soon enough for this species. 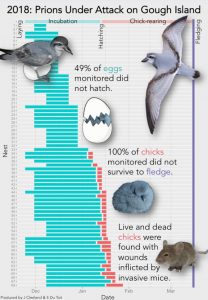