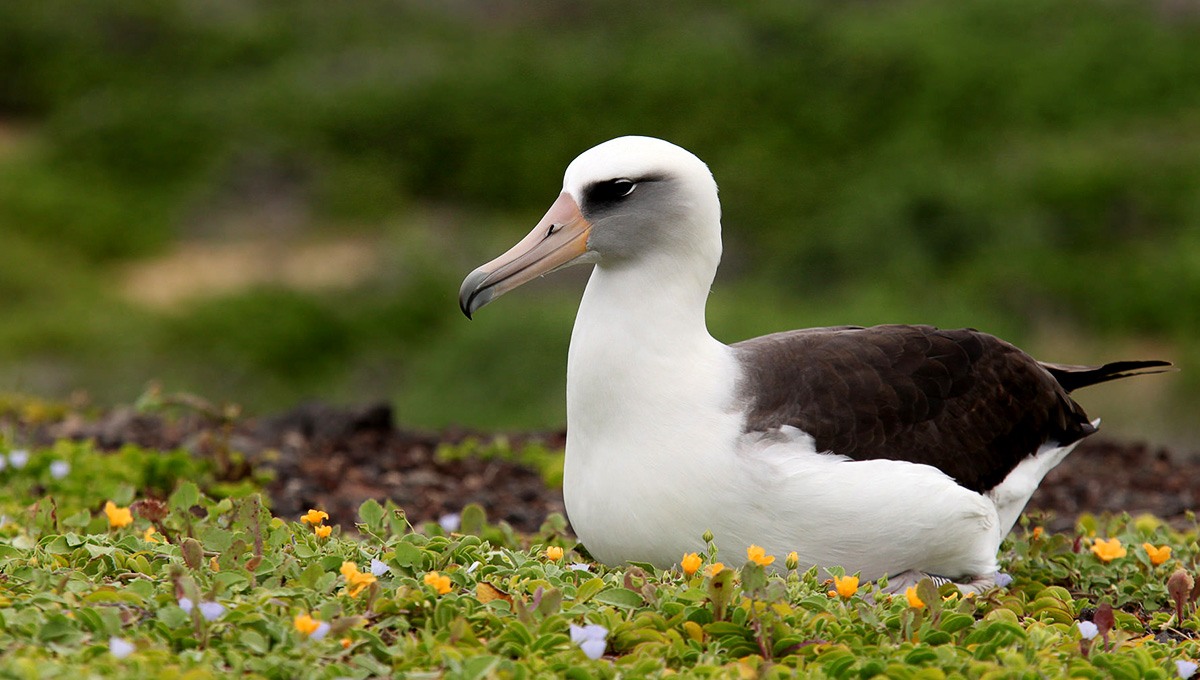 Artist and author Caren Loebel-Fried shares the experiences that inspired her children’s book “A Perfect Day for an Albatross.”

Several years ago, albatrosses soared into my life. Why? I don’t remember how or why this happened. But I can tell you, I became stricken with these mysterious, majestic seabirds.

I am an artist and author. I use the power of pictures and stories to open up the world of wildlife to people young and old. I live in the rainforest in Hawai`i, and wake every morning to native Apapane birds, their wings whirring, their bubbly songs the music of the sunrise. But the albatrosses and the ocean were calling me! 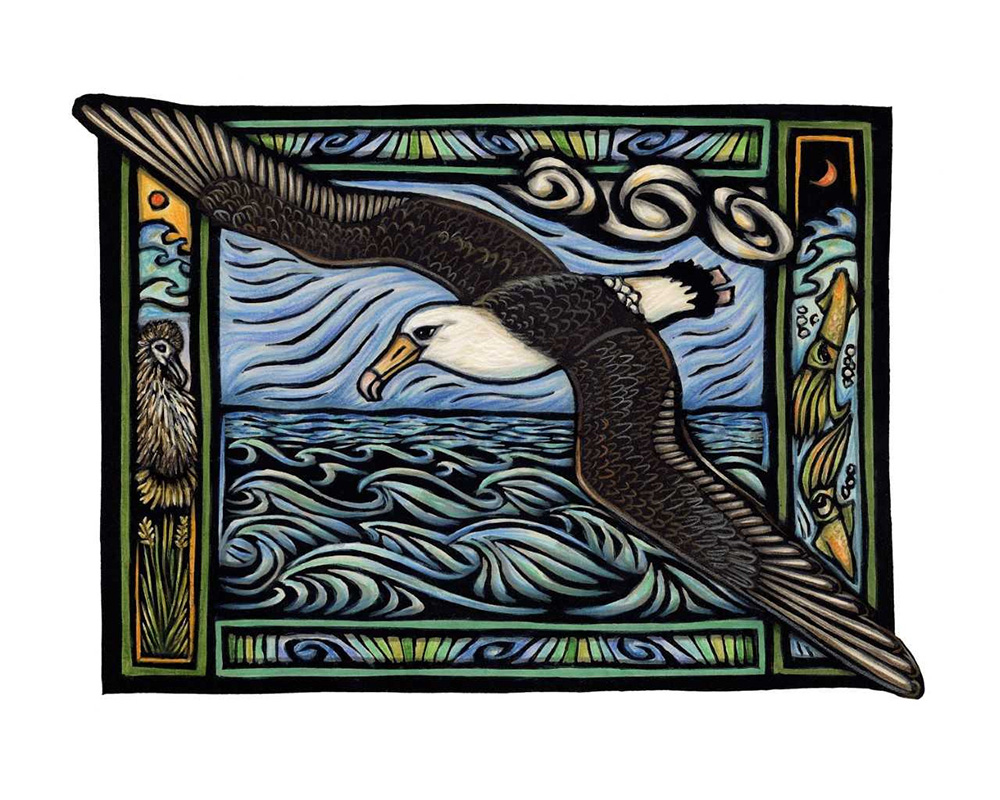 I began to read everything I could about albatrosses, and learned so many incredible things about them. I learned they travel thousands of miles for food, effortlessly sailing over the ocean; they can only survive and fly with wind, soaring dynamically, and use less energy in flight than on land; the only time they spend on land is to meet their mates and nest–in places that are safe from predators. I was fascinated. And I was more curious than ever.

I finally found a way to be among lots of albatrosses. In December of 2014, I left for a five week stay on Midway Atoll, where 72% of the worlds Laysan Albatrosses nest, in addition to many Black-footed, and one or two Short-tailed Albatrosses. I was excited to be part of an albatross census team, and to create iconic art for the US Fish and Wildlife Service. We landed in the dark of night to avoid hitting birds in flight during the day. While taxiing to our stop, I could see in the beam of the plane’s headlights dozens of white bodies sitting stock still, one after the other. Laysan Albatrosses! Awake all night I listened, mesmerized by the whinnying, braying, honking, clacking, staccato bill clapping, and mad wails of albatross romance. 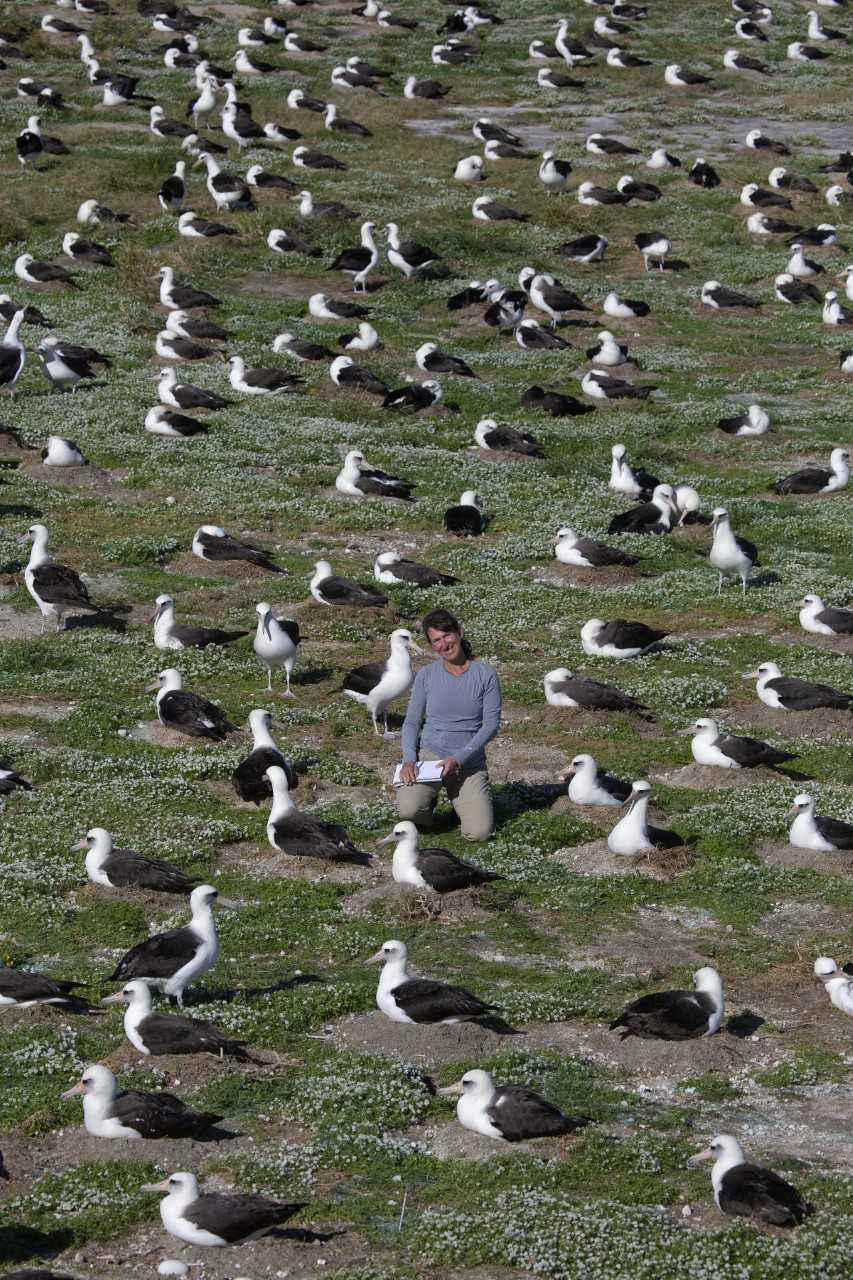 I was one of 19 volunteer “counters.” We swept through the colony, methodically counting every single active Laysan and Black-footed Albatross nest, covering every inch of the atoll’s three islands. Ignoring us in their meditation, the albatrosses kept their eggs warm, preened, slept, nuzzled their mates, talked to their eggs, and snapped at us only when if we ventured too close. There were many youngsters, too, dancing and vocalizing as couples or in small groups. They were practicing these crucial activities that they would need to master to attract and win their life mate.

It was a record-breaking season. Over two weeks, we counted 694,654 Laysan and Black-footed Albatross nests. You might think, “So many nests! How can albatrosses be in trouble?” The IUCN conservation status of albatross species around the world ranges from Critically Endangered to a bit less so. 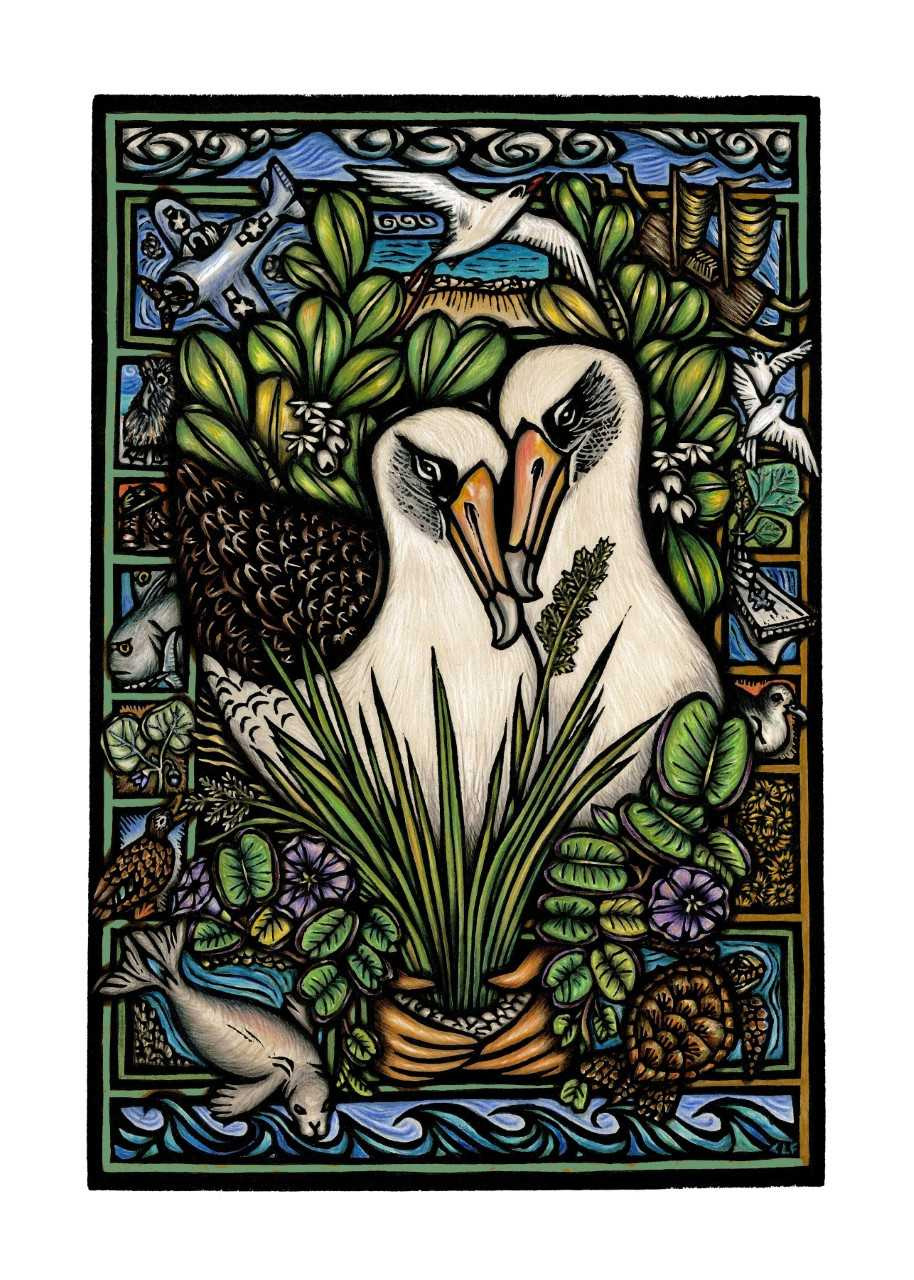 On Midway, I witnessed and learned about many challenges to albatrosses. Winter storms and ocean surge swept away albatross nests built too close to the water’s edge- a year’s work washed away in an instant. Our beach clean-ups left long stretches of sand as pristine as we imagine they ought to be. But within days, white sand was again cluttered with colorful garbage of all shapes and sizes, a sobering reminder of how much plastic is in the ocean. Soon biologists there would discover that mice were preying on adult albatrosses who would sit tight, devoted to keeping their egg warm. I read about albatrosses hunting for food, attracted to fishing boats, getting caught up in lines and drowning. Threats are all around these incredible birds.

But I also witnessed albatrosses in their glory. I was close to them all day, and listened to them all night. I knew I was seeing only a fraction of their lives. Ninety-five percent of their time was spent in their true home over the open ocean. But, here on land was where they met their lifelong mates and raised their families. I felt the stirrings of a story in me. I wanted to share with the world the mysterious lives of these incredible creatures. Since many of us humans are intrigued by birds, and by learning about birds we learn about their environments, I believe birds present the perfect opportunity to introduce young people to conservation. And albatrosses are, to me, the most intriguing of all birds! 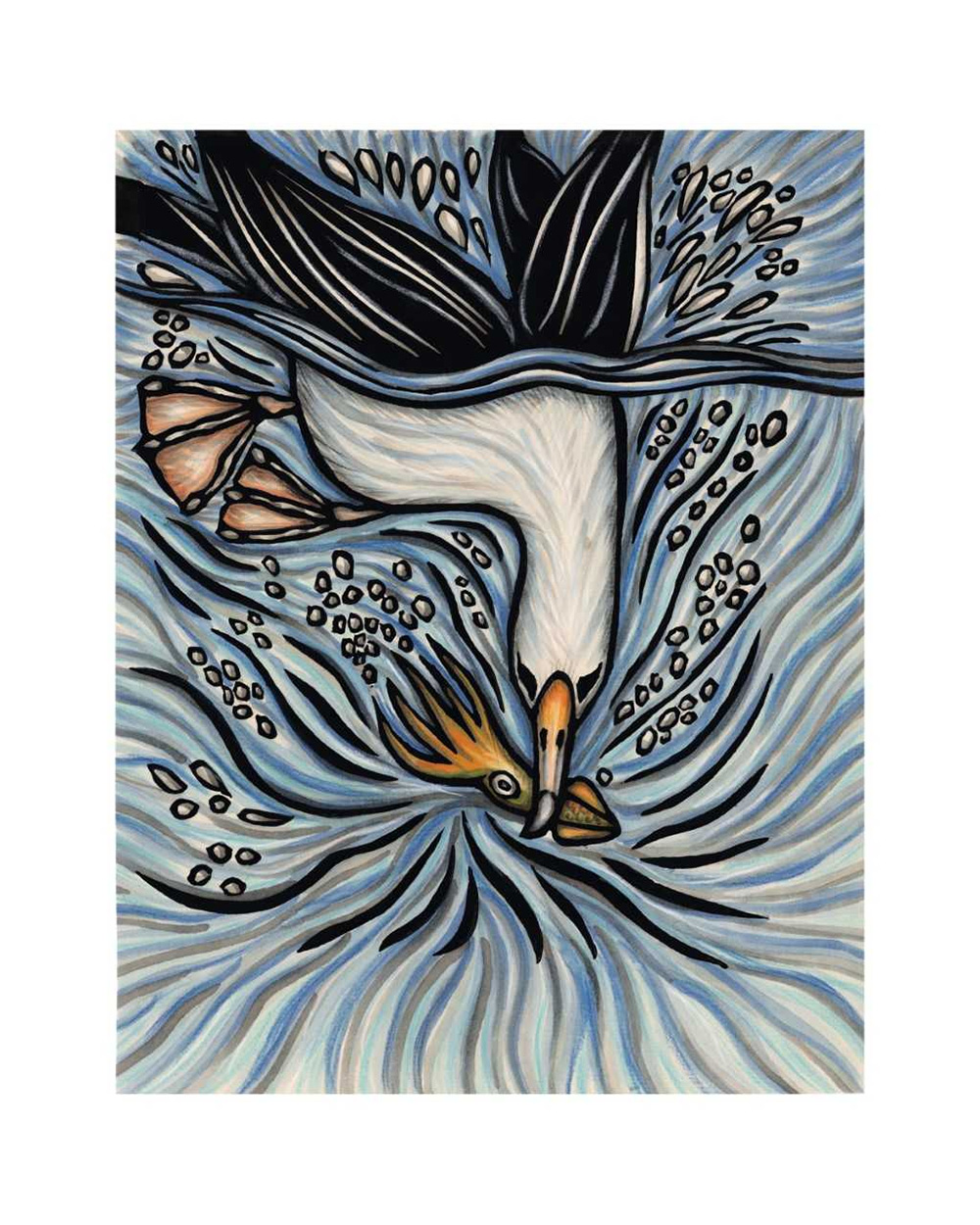 And so, A Perfect Day for an Albatross was born. In partnership with Cornell Lab of Ornithology’s publishing wing and the biologists who fact-checked and verified the authenticity of the story and art, I delved into telling about a day in the life of an albatross. I told this story from the perspective of a nesting female Laysan albatross called Malie, which means “calm, quiet, serene” in Hawaiian. I hoped that you, the reader, would be able to feel the atmosphere of Midway, and awaken your imagination to what it might feel like to be an albatross. I wanted the art to be irresistible, engaging, so you wouldn’t realize you were learning all about albatrosses while enjoying the art and story. I hoped to convey the enormousness of this tiny place, the incredibleness of albatrosses…I hoped that you would fall in love with albatrosses, just like I did! Even if you never have the good fortune to visit a remote island where albatrosses nest, our lives affect theirs. A feeling of connection with albatrosses will make us care about what happens to them, and we will want to help protect them.

To see more of Caren’s artwork visit her website. 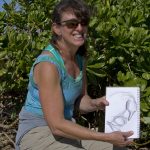 Caren, author and artist from Volcano, Hawai`i, learned the ancient art of block printing from her mother. She has created several award-winning picture books, and art commissions including United States Fish & Wildlife Service, Midway Atoll National Wildlife Refuge, and Kilauea Point Natural History Association. Passionate about protecting wildlife and places, she travels and researches for her art and stories, aiming to bring people, especially children, closer to the natural world with the hope that they will be inspired to help care for it.