The ‘Ua’u, also called the Hawaiian Petrel (Pterodroma sandwichensis), is a seabird listed as Vulnerable by the International Union for the Conservation of Nature. ‘Ua’u spend most of their time out at sea, but they settle on the slopes of Mauna Loa, Hawai’i during nesting season. The Hawaiian Petrel burrows deep into lava rock where it will lay just one egg. The mother and father switch off caring for the chick and foraging.

The fluffy chicks hatch in August and remain in their burrows until November when they fledge or take their first flight out to sea. Adults, eggs, and chicks are extremely vulnerable to predators throughout the long breeding season as all activity occurs on the ground. 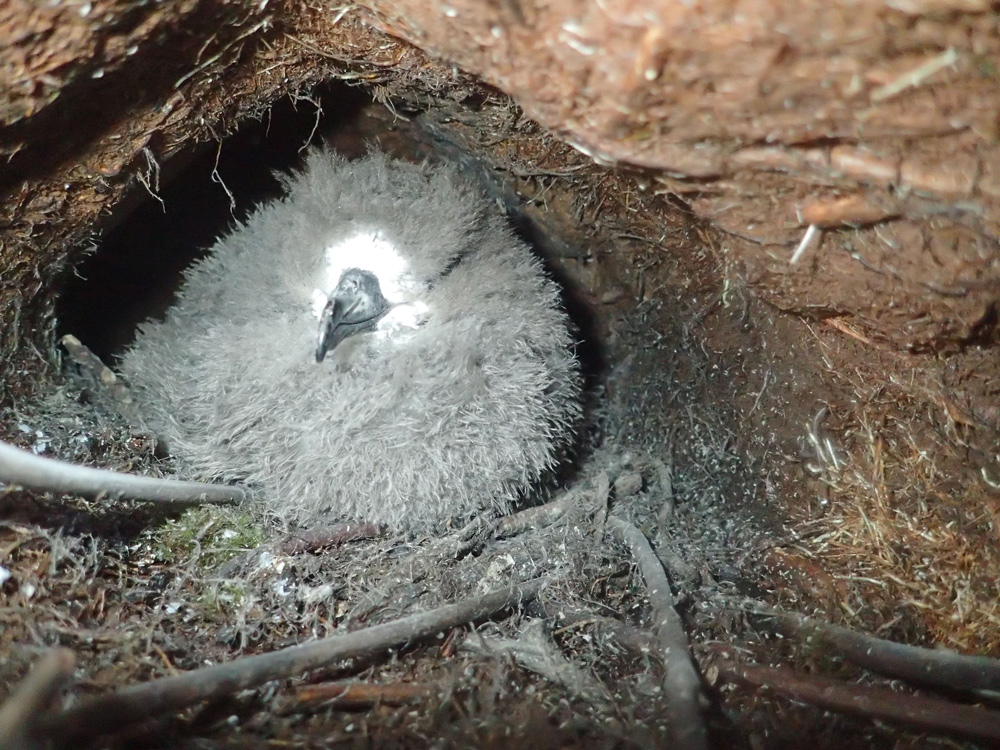 A Hawaiian Petrel Chick in its burrow. Credit: Andre Raine

The native seabirds are extremely vulnerable to predatory feral cats that have been introduced to the island–but now, things are looking up. As a measure to protect ‘Ua’u from the invasive feral cats, a 6-foot high, custom-designed fence has been installed all around the nesting area to keep the predators out.

Construction crews worked and camped at elevations between 8,000 and 10,000 feet, in steep and loose lava rock terrain, and in weather that ranged from hail, and high wind, to extreme heat. The site is very remote and all materials, gear and staff had to be flown in and out.

The protected area amounts to 600 acres and took three years to complete. Such projects are crucial for preventing extinctions of native island wildlife. Congratulations to the National Park Service, National Fish and Wildlife Foundation, U.S. Fish and Wildlife Service, American Bird Conservatory, Hawai‘i Pacific Parks Association, and the Pacific Cooperative Studies Unit at the University of Hawai‘i for successfully implementing this important measure to protect the Hawaiian Petrel!