Have you ever heard of a burrowing bat? You might be accustomed to seeing bats depicted in caves, but indeed, some prefer to make their homes underground.

Burrowing bats are peculiar because they not only fly; they also scurry about on all fours, over the forest floor, under leaf litter and along tree branches, while foraging for both animal and plant food.

Today, burrowing bats are only found in New Zealand, though they once also lived in Australia. In an exciting fieldwork day, a team of researchers from UNSW Sydney, University of Salford, Flinders University, Queensland University, Canterbury Museum, Museum of New Zealand Te Papa Tongarewa, the American Museum of Natural History, and Duke University discovered the skeletal remains of an extinct giant burrowing bat in Central Otago on South Island, New Zealand. It is believed to have gone extinct after the early Miocene due to a global climate change trend into cooler temperatures. The study is published in the journal Scientific Reports.

With an estimated weight of about 40 grams, the newly found fossil bat was the biggest burrowing bat yet known. It also represents the first new bat genus to be added to New Zealand’s fauna in more than 150 years. 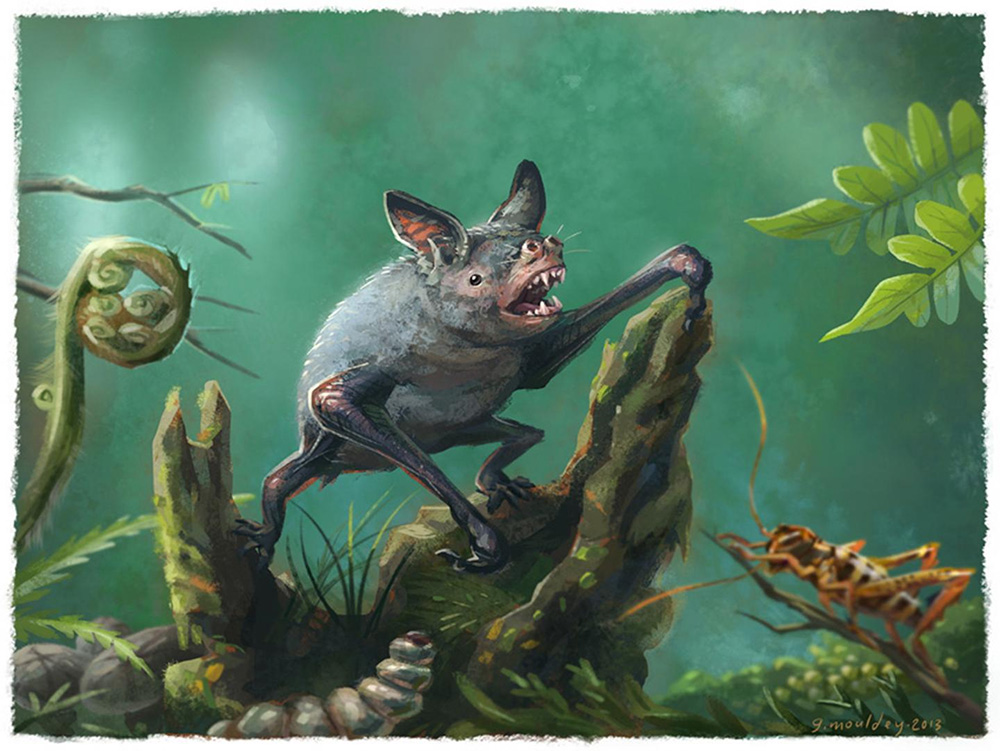 An artist’s impression of a New Zealand burrowing bat, Mystacina robusta, that went extinct last century. The new fossil find, Vulcanops jennyworthyae, that lived millions of years ago in New Zealand, is an ancient relative of burrowing or short-tailed bats. Credit: Gavin Mouldey

The bat has been named Culcanops jennyworthyae, a mashup of the discoverer Jenny Worthy and Vulcan, Roman god of fire and volcanoes. Professor Hand, Director of the PANGEA Research Centre at UNSW said:

Vulcanops’s specialized teeth and large size suggest it had a different diet, capable of eating even more plant food as well as small vertebrates – a diet more like some of its South American cousins. We don’t see this in Australasian bats today.

New Zealand, like many islands around the world, is well known for its incredible biodiversity and evolutionary distinctive species. This discovery fills in more details of the picture of the island nation’s biological richness and also provokes the question, “what else don’t we know about island biodiversity?”