New study estimates the population of the Critically Endangered Small Kauai Thrush and advises the next steps in conservation efforts.

Kauai Island is home to numerous beautiful bird species, many of which are threatened with extinction in their native range. The Small Kauai Thrush, also known as the Puaiohi, is one such native species. Until recently, researchers were unable to adequately estimate the population of the bird due to its elusive behavior and rugged, inaccessible habitat on the Alakai Plateau. A new study by Dr. Lisa Crampton and Dr. Eben Paxton has used innovative techniques to uncover exactly how endangered the species is in Kauai.

The birds were once prevalent throughout the island but the introduction of invasive predators, disease, and habitat loss have led to a population decline. Invasive rats prey on the bird’s eggs which has limited the growth and recovery of the species. The study also points to the presence of invasive plants which have altered the Small Kauai Thrush’s native habitat and limit their range. 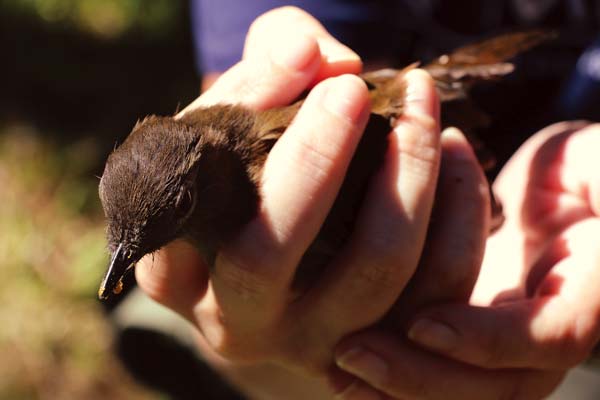 Conservationists have worked for over two decades to breed the Small Kauai Thrush in captivity in order to give the wild population a much needed boost.

The Small Kauai Thrush is listed as Critically Endangered by the IUCN Red List of Threatened Species and has been listed on the United States Endangered Species List since its creation. When a species is listed on the Endangered Species List, a recovery plan is made. In the case of the Small Kauai Thrush, one of the first goals of the plan was to estimate the population of the species, but until recently this was not fully possible. The researchers used a combination of field-collected and remotely-sensed data to generate a population estimate of a mere 494 individuals. Paxton, of the U.S. Geological Survey and a co-author of the study, explained:

Estimating the population size will now allow researchers to monitor the size of the population. For almost two decades conservationists have had a captive breeding program in place to boost the wild population. The program is credited with increasing the wild population from as few as 300 birds to the current 500. Next, the researchers priorities are to remove invasive rodents, which will be done by setting approximately 300 traps within the bird’s critical habitat. Crampton, the lead author of the study, commented:

This study allowed us to estimate Puaiohi distribution in remote parts of the species’ range that are difficult to survey, and identify new hotspots of Puaiohi where we should implement these management activities, which will accelerate the species’ rate of recovery.

Due to advances in monitoring, conservationists will have a better understanding of conservation needs moving forward. Establishing the population size will give the Small Kauai Thrush Recovery Program a clear understanding of their status and help researchers to monitor and measure recovery. The captive breeding program released their final three birds into the wild last week and now plans to focus on the removal of invasive predators. One can hope that someday the Small Kauai Thrush will be prevalent throughout the island, just as it was before the introduction on invasive species.