After the removal of invasive goats and rats, native lizards on Redonda Island seem to be on an evolutionary fast-track.

A year ago when I arrived here by helicopter with researchers Colin Donihue and Anthony Herrel, this small Caribbean island was a moonscape. A mile long, Redonda is a rock nub protruding up from the sea; its steep, windy cliffs dropping into the sapphire water below.

Accounts from various explorers indicate that over the last century its surface had been gradually eaten bare of vegetation by invasive goats. Guano miners in the 1800s may have brought the animals as a source of fresh meat, although there’s mention of goats as early as 1745. The island we saw was also overrun with rats, likely survivors of shipwrecks, which would eat just about anything the goats didn’t—including at least two of the three species of lizards found only here. 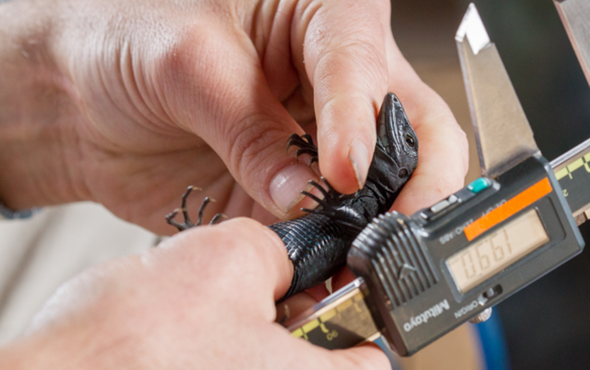 Anthony Herrel measures a ground lizard (Pholidoscelis atratus) to see how Redonda lizards might have changed after the numerous goats and rats that had ravaged the island were removed. Credit: Geoffrey Giller

But thanks to a concerted effort between the government of Antigua and Barbuda (of which Redonda is part), along with several local and international nonprofit organizations, this island has been reborn. Over the course of several months last year officials led the removal of about 50 goats, most flown to Antigua, where they are valued for their supposed ability to survive drought. Conservationists and rock climbers dispensed rat poison in bait stations across the island to clear out the rodents, too.

Today the landscape is covered in green grasses, tree saplings and flowering plants—all able, for the first time in decades, to flourish. The quick recovery was a surprise for us during our return trip in March 2018, but has apparently been an even greater delight for the lizards—they are flourishing. And their bodies seem to be changing in short order.

Donihue, a postdoctoral fellow at Harvard University, and Herrel, based at France’s National Museum of Natural History, are the first to study how endemic species like lizards change in real time as an island recovers after the eradication of invasive mammals. Donihue says that after just a year he has witnessed some unexpected changes. 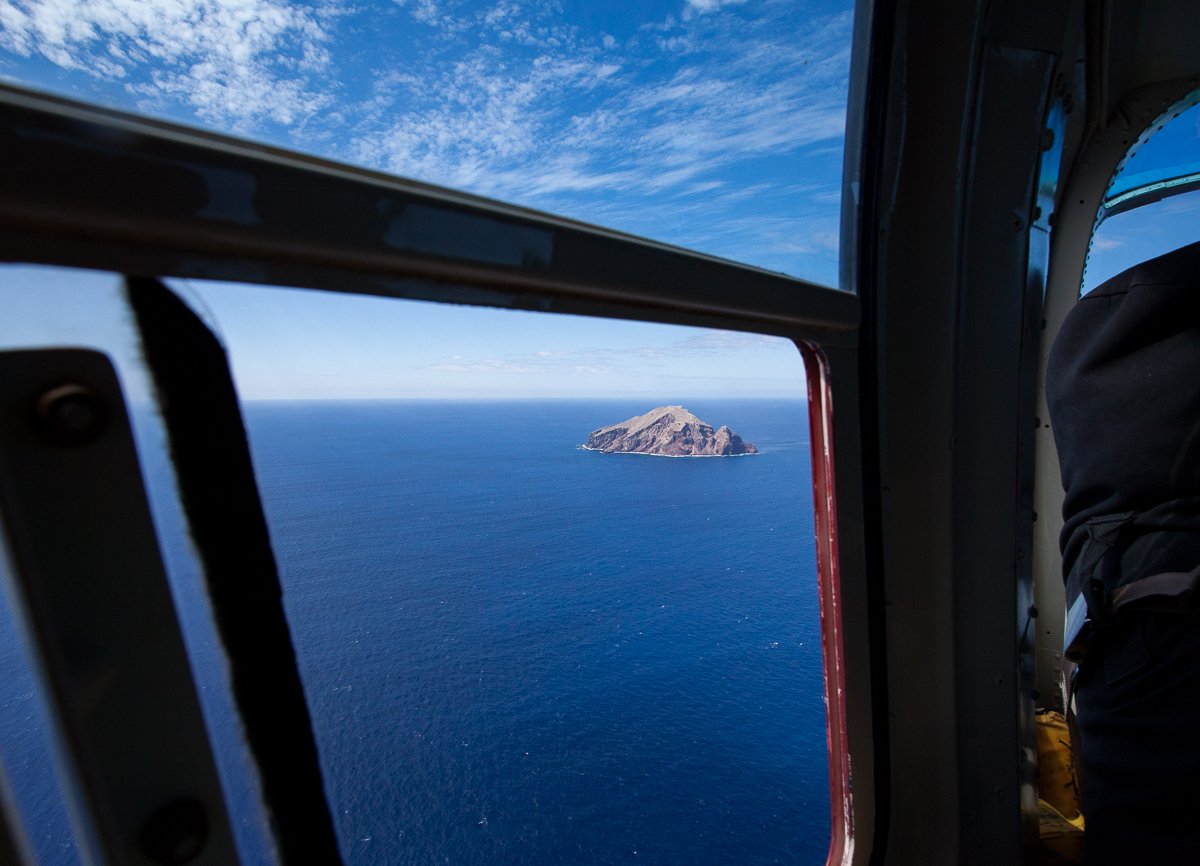 Of course, the number of lizards has risen sharply now that more plants support more insects for them to eat—and fewer rats are eating them. Last year during several surveys around the island, Herrel counted an average of 67 so-called tree lizards, a species of anole named Anolis nubilis. A year later, almost to the day, the number had jumped to 169.

The number of ground lizards, Pholidoscelis atratus—shiny, jet-black and with incredibly long tails—had likewise risen from 92 to 136. Using another population estimation method, which involves catching lizards, marking them and then catching in the same area a few days later to see what appears, the estimated number of anoles in one spot went from 12 in 2017 to 41 in 2018. The prevalence of the third species, a pygmy gecko that looks like a yellow rubber fishing lure, does not appear to have changed much. 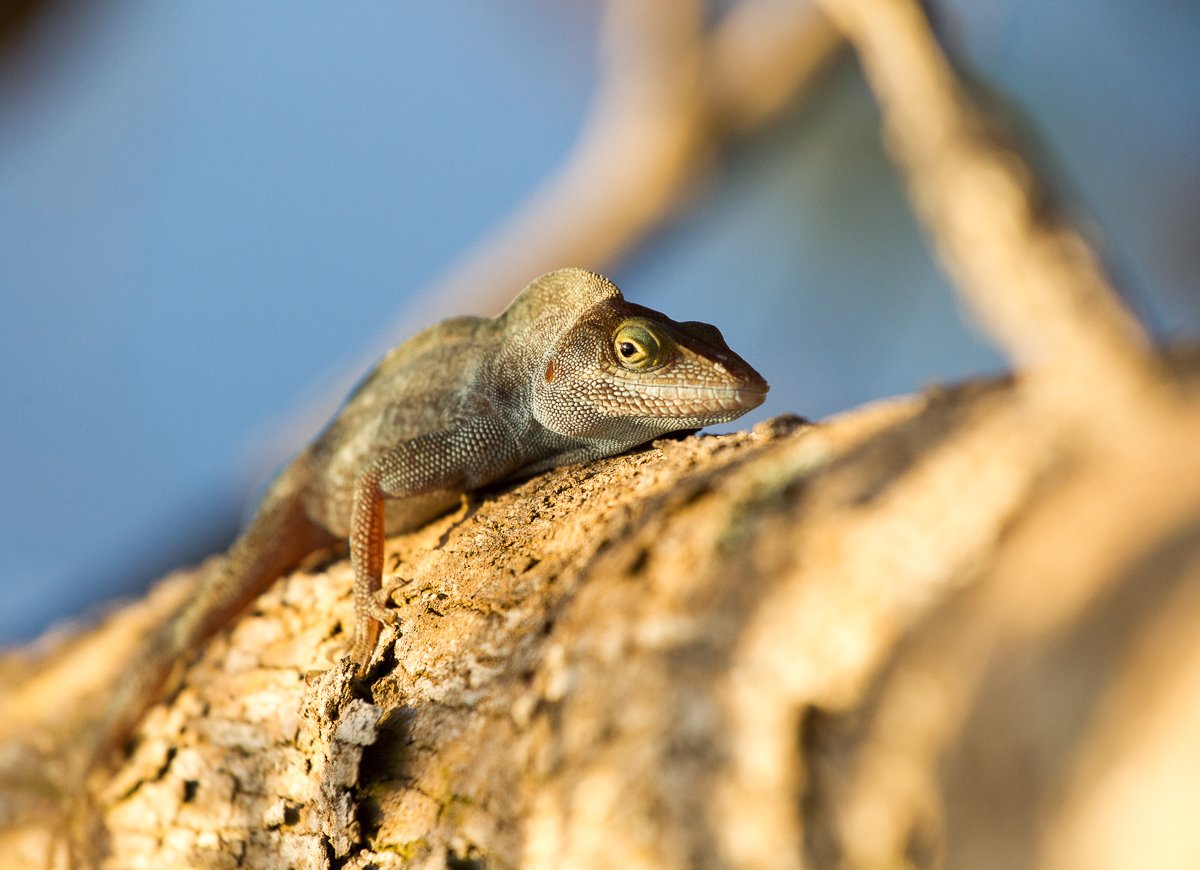 A male tree anole (Anolis nubilis) sits on the branch of one of the island’s few trees, which should start to rebound. Credit: Geoffrey Giller

In the absence of trees the anoles had been using boulders to sun themselves and to display in search of mates. As trees begin to prosper again, Donihue expects to see the various gray, green and brown-colored anoles thrive. “They have the name Redonda tree lizard for a reason,” he says.

The ground lizards have provided the greatest surprise. On three different occasions during our March visit we saw a ground lizard chase down and catch an anole, running off with its prize to devour it elsewhere, like a dog that had grabbed a juicy hunk of meat. We had never seen such behavior before. “There’s a new resource, and they’re just going for it,” Herrel says. “There’s a lot of really high-quality food that wasn’t really available before,” Donihue adds. Now that the rats are gone, the ground lizards may be reclaiming their rightful place at the top of the food web. Donihue and Herrel also saw an adult ground lizard catch and start to eat a juvenile of its own species. That behavior represents not only a change in the type of prey the lizards are seeking, but in their ability to actually catch it.

It also appears the ground lizards have had shifts in some body measurements—specifically in the length of their forelimbs, which appear to be slightly longer, on average, than they were a year ago. Herrel says there are several possible explanations for such a shift. Longer front legs could help the lizards maneuver better through the returning undergrowth—helpful if they’re chasing down or fleeing from their fellow lizards. So lizards with longer forelimbs might have survived better over the past year. Or lizards hatched in the last year just have more resources, enabling them to grow longer forelimbs. The eradication of rats means the average limb length could be shifting simply because the predatory selective pressure related to rats has been removed, says biologist Yoel Stuart of The University of Texas at Austin who studies rapid evolution in lizards but was not involved in this project. 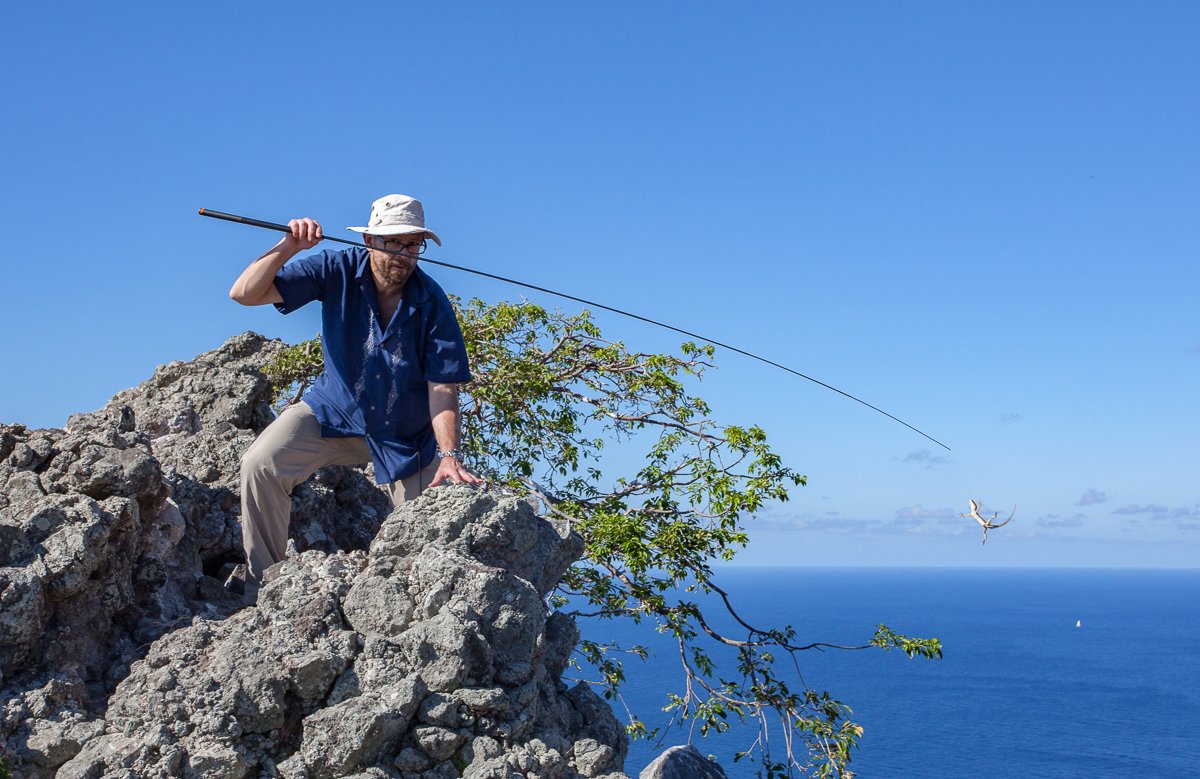 Anthony Herrel uses an extendible carbon-fiber pole with a string loop to harmlessly catch an anole at the edge of a Redonda cliff. Credit: Geoffrey Giller

Holly Jones, an ecologist at Northern Illinois University who studies island restoration, agrees that “the removal of invasive species from islands is a good candidate for sparking rapid evolution.” Drastic changes in animals after the removal of goats and rats is common, she says, and will likely lead to more changes in the lizards as they adapt to the new paradigm. Stuart concurs: “I do think all the ingredients are there” for rapid evolution. But he cautions a lot more work needs to be done to prove that is happening.

Figuring out the exact cause of an evolutionary change is nearly impossible without extensive experimentation, including raising lizards in the lab and setting up control areas. Donihue and Herrel acknowledge such an undertaking is beyond the scope of their current work. But they want to continue visiting Redonda in coming years to confirm whether morphological changes in the lizards take place over multiple generations, which would provide more support for evolution.

The two experts expect Redonda’s transformation to continue for decades. As trees mature they will shade out grasses and shrubs that have sprung up, and further stabilize the island’s soil and slow its erosion into the sea. And as the anoles return to those trees, Herrel says, he expects to see bigger toe pads and longer forelimbs for holding on to branches, for example. More trees will also mean more seabirds—especially tree-nesting red-footed boobies and frigate birds.

Eventually, the Antiguan Department of Environment hopes to reintroduce burrowing owls to the island. And they hope to designate Redonda, and the waters around it, as a protected area. That way the lizards can continue to evolve unbothered by mammals—humans included.