New research explores the connection between geographical distribution and the colors of bird feathers.

Birds have reasons for looking the way they do–and we have modest understandings of these. Blending in can offer protection, while standing out can promote reproduction. Gloger’s rule states that birds living in humid climates tend to have darker pigmentation. Darker feathers are believed to be useful for defense against parasites, temperature regulation, and camouflage. However, researchers are uncertain about the validity of these explanations of Gloger’s rule. The specifics of how and why feather coloration relates to geographical distribution are not fully understood, and in fact, popular notions, such as that tropical birds are more colorful than those living in dry climates, may be erroneous.

A recent scientific study appearing in the journal Global Ecology and Biogeography, “Ecogeographical gradients in plumage coloration among Australasian songbird clades” by Nicholas R. Friedman and Vladimír Remeš, sheds some light on our questions about feather coloration. To better understand the reasons for our feathered friends’ colors, the researchers studied two closely related but distinctive bird families: Honeyeaters (Meliphagidae) and Australasian Warblers (Acanthizidae). These families are only found in Australasia (Australia, New Zealand, the island of New Guinea, and neighboring islands in the Pacific Ocean).

Honeyeaters are often brightly colored, sporting distinctive yellow or red feathers. They are monogamous, meaning that mates stay together for life. Honeyeaters are sexually monochromatic, meaning that males and females have identical coloration. These birds feed on nectar and other sugary substances found naturally in their habitat.

Australasian Warblers tend to be dull in appearance, with brown, grey, or olive feathers and an occasional modest splash of yellow. They feed mostly on insects. Australasian Warblers are known for cooperative breeding, meaning that a nesting pair expecting a chick receives feeding and protective support from other warblers.

The researchers wanted to compare plumage coloration across these two families to find out if and how environmental factors affect the coloration of their feathers.

The researchers used a technology called reflectance spectometry to measure plumage coloration in five male honeyeaters and five male Australasian warblers. They measured coloration on feather patches all over the birds’ bodies. They calculated contrast, hue, and brightness. Next, they used range maps from BirdLife International to estimate climatic and geographical variables. They included latitude, elevation, temperature, seasonality, precipitation, transfer of moisture from earth and plants to air, vegetation, and humidity. The researchers then compared the coloration measurements  to climatic and geographic variables. 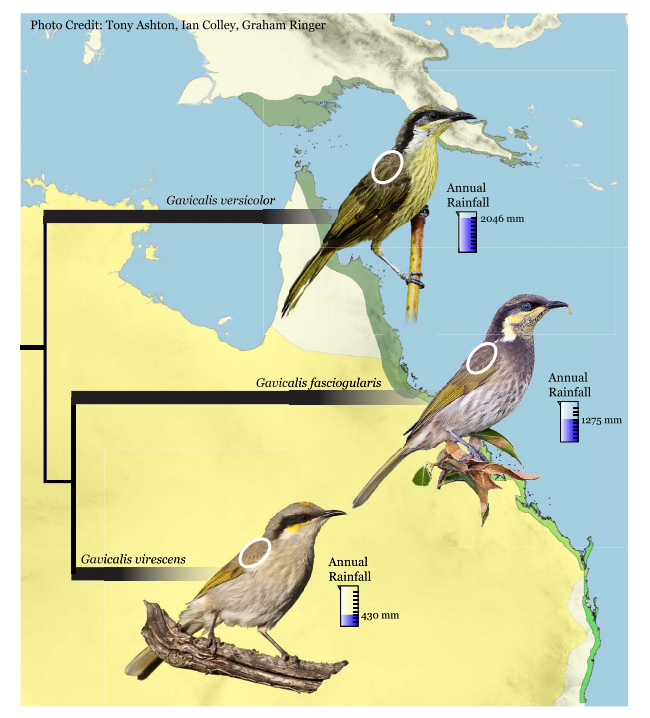 Figure 5: An Illustration of Gloger’s rule using the three species of the genus Gavicalis. Each species is shown in an example photo on the left with a single dorsal patch highlighted in white, and is overlaid onto its distributional range. Average annual rainfall for that range is indicated on the right, and phylogenetic relationships are indicated at left.

Shedding Light on a Darker Reality

The research did not support the popular notion that birds of the tropics are more colorful than birds at other latitudes. Rather, the researchers found that birds in arid climates were more colorful. In these climates, breeding seasons may be short and unpredictable based on rainfall, leading to evolution of distinctive ornamentation meant to attract mates. Birds in regions with more vegetation had markedly darker plumage; the research supported Gloger’s rule–that darker coloration is observed in birds living in humid climates.