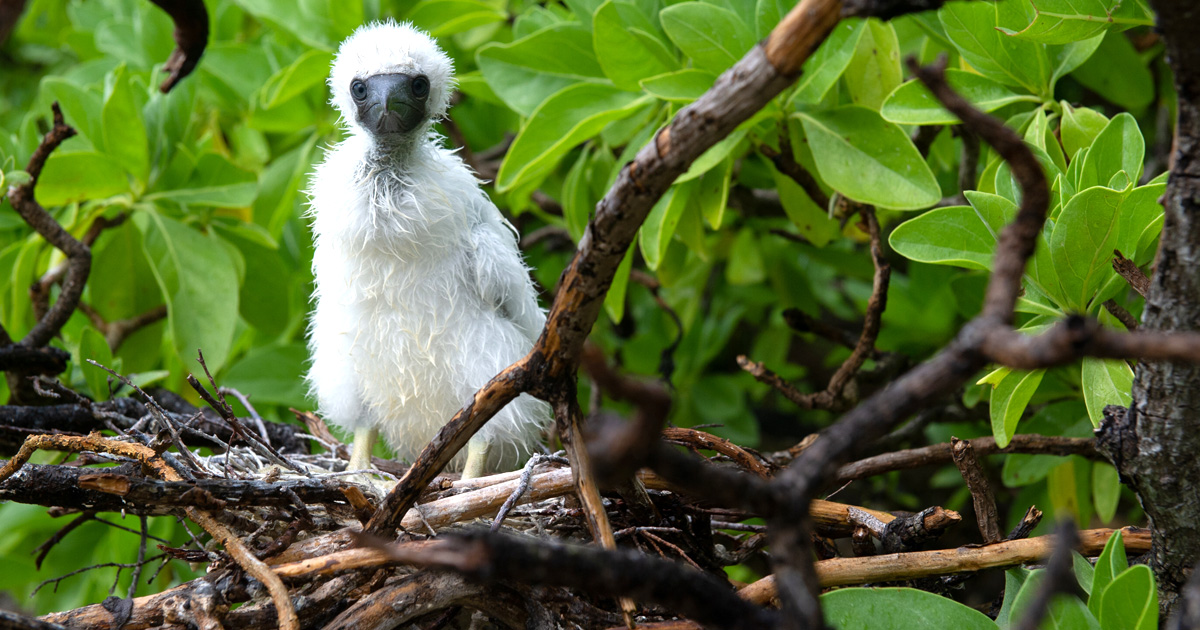 Island Conservation and Tetiaroa Society have joined forces to remove invasive rats from Tetiaroa Atoll, restoring the local ecosystem and creating a global model for ridge to reef conservation.

Tetiaroa Atoll boasts one of the Pacific’s healthiest and comparatively in-tact coral reef and terrestrial tropical ecosystems. A rich diversity of seabirds nest in native Pisonia trees, while sea turtles, reef sharks, and fish thrive in the surrounding waters. Still, invasive species and climate change threaten the native wildlife, putting these once pristine ecosystems at risk along with atolls across the region.

As part of the Tetiaroa Atoll Restoration Program, Tetiaroa Society and Island Conservation are carrying out a major conservation intervention on Tetiaroa, French Polynesia. The program aims to restore seabird populations and establish Tetiaroa as a sanctuary for seabirds, Green Sea Turtles, coconut crabs, other native invertebrates, and endangered, regionally endemic bird species.

Islands represent a disproportionate amount of plant and animal diversity for their size and are the epicenter of the extinction crisis, with invasive species as the primary threat. Globally, invasive rodents are among the most damaging invasive species, particularly on islands where they are associated with 86% of recorded extinctions. On Tetiaroa, as on many islands and atolls, invasive rats are a persistent threat, decimating native seabird populations, feeding on Green Sea Turtle hatchlings, crabs, and the seeds and saplings of native vegetation. Following the successful removal of invasive rats from Tetiaroa’s Reiono Island in 2018, Tetiaroa Society, Island Conservation, and partners are now working together to remove invasive rats from the entire atoll to secure habitat for native wildlife.

Ridding the islands of invasive rats would restore balance for the terrestrial and marine ecosystems—protecting endangered native birds and turtles and enhancing the resilience of surrounding coral reefs, making them more resistant to climate change. Restoration is also expected to benefit reef fish populations, ensuring food security for local peoples intimately connected to healthy coral reefs economically and culturally. Tetiaroa will once again become a sanctuary for birds and other native fauna and flora, and present an opportunity for translocation of rare bird species, which are threatened within their current ranges, from elsewhere in French Polynesia to Tetiaroa.

Beyond the benefits to Tetiaroa Atoll, the habitat restoration program presents a unique chance to record a wide array of ecosystem changes in real-time and develop a model for the sustainable management of tropical islands and their coral reefs in these uncertain times. The lessons learned on these small motu could go on to inform the restoration of more than 700 tropical atoll ecosystems, where invasive species and climate change pose a significant threat to our world’s global biodiversity. It might seem small, but Tetiaroa is just the beginning.

If you would like to support the restoration of Tetiaroa Atoll and the emerging research, visit www.BirdsToReef.org today.