Researchers are looking for the Tasmanian Tiger in Northern Queensland after potential sightings suggest the species might not be extinct.

Potential sightings of the Tasmanian Tiger in Northern Queensland make researchers question whether the species might still exist 80 years after its supposed extinction. The Tasmanian tiger, also known as the Thylacine, has been presumed extinct since 1936 when the last known individual died at Hobart Zoo.

Tasmanian Tigers were (and according to new claims, maybe still are) an apex predator that lived on continental Australia, Tasmania, and New Guinea. Supposedly, the introduction of dogs, diseases, and hunting proved too much, and drove the carnivorous marsupial to extinction. 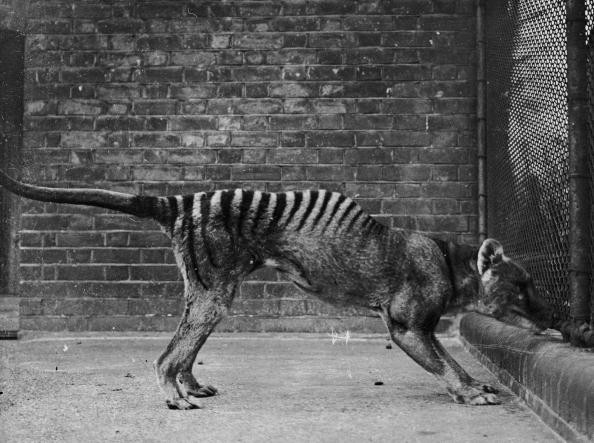 Since their extinction, many sightings have been reported of dog-like animals that are not believed to be foxes or dingoes, but these claims were not considered credible. However, new eyewitness accounts provide detailed descriptions of an animal that could potentially be a Tasmanian Tiger. Professor Bill Laurence of James Cook University explained:

In one case four animals were observed at close range – about 20 feet away – with a spotlight.

The descriptions of the dog-like animals did not match any species such as dingoes, wild dogs, or feral pigs. The behaviors, sizes, and shapes are reportedly consistent with that of the Tasmanian Tigers. Sightings on the Cape York Peninsula are giving researchers and conservationists reason to believe, cautiously, that the apex predator may not be extinct after all.

Dr. Sandra Abell, a researcher with James Cook University’s Center for Tropical Environmental Sustainability Science and her team are working to set camera traps to monitor the species. Abell explained that researchers are still skeptical:

It is a low possibility that we’ll find Thylacines, but we’ll certainly get lots of data on the predators in the area and that will help our studies in general.

Camera traps will allow researchers to monitor for any potential Tasmanian Tiger activity as well as look for other rare and endangered species such as the Nothern Bettong, which is threatened by invasive predators. Although there is no conclusive evidence of the species as of yet, conservationists are excited for the possibility that the species could still be out there. Lawrence explained:

[Discovering a living Thylacine] would almost stop the earth turning on its axis in terms of how big the news would be…It would be an absolute revelation and would change the way a lot of people think about a lot of species that we may have presumed to have gone extinct but possibly have not entirely disappeared.

Only time and extensive surveys will tell if the Tasmanian Tiger is in fact alive and well in Queensland or if the reported sightings are simply mistaken.