Invasive species can be harmful in a variety of ways: competition for resources, predation, herbivory, crop damage, and more. In Hawai’i researchers have found a new side-effect of the invasive Coqui Frog. A new paper published in The Condor: Ornithological Applications found that the abundance of the invasive frogs is linked to a previously unrecognized ecological issue.

Coqui frogs were introduced to Hawai’i in the 1980s and now are found in densities of up to 91,000 frogs per hectare. These frogs prey on native insects and outcompete native species for food and resources. They are also famous for being acoustically abrasive to people living on Hawai’i. But now research reveals that the presence of Coqui Frogs is linked to a rise in non-native bird populations.

Researchers began by identifying the presence of invasive Coqui frogs and estimating their population densities at 15 sites. They then performed bird surveys in each of the areas and found a total of 20 species, of which only 5 were native. Native birds densities were consistent throughout the sites and showed no measurable variation, but three species of non-native birds were more abundant in areas with Coqui Frogs. 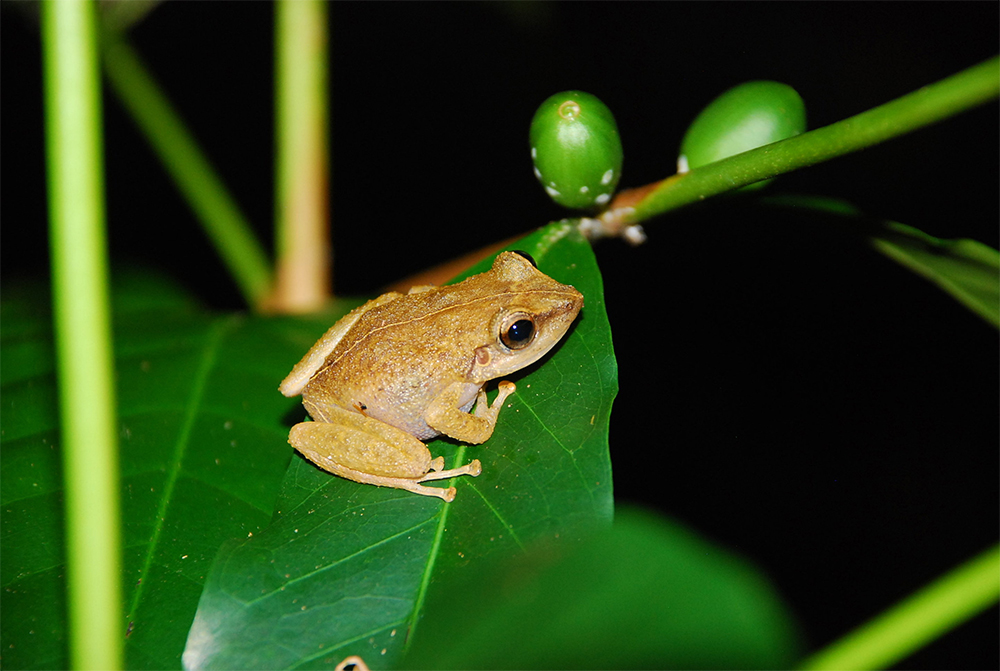 Coquis were introduced to Hawai’i from Puerto Rico in the 1980s and may be giving a boost to the islands’ invasive birds. Credit: R. Choi

Coqui Frogs are not believed to be in direct competition with native birds since Coquis forage in leaf litter and insectivore birds forage in the trees, but the researchers believe that non-native birds are using Coqui Frogs as a new food source. Karen Beard commented:

I was very surprised with the results for birds. It had been hypothesized before our study that coquis would compete with birds, particularly natives, because we know that coquis reduce insects where they invade.

Researchers also believe that Coquis could be responsible for a change in the nutrient cycle that could give non-native birds a boost not only from predation on Coqui Frogs but also through the addition of flies from excess biomass in the ecosystem. Beard explained:

In retrospect, I guess it’s not too surprising that predation is a more important interaction than competition—that is a common finding in invaded systems—but it was definitely not what we went in to test. The response that we see for Common Mynas and Red-billed Leiothrix is pretty convincing. We’re pretty sure that some of this increase is due to these species eating live or dead Coquis, and we’re suggesting that some non-native birds are likely consuming Coquis and this novel resource appears to be increasing their populations.

Species invasion science is often complicated, and additional research is needed to better understand what course of action is best in this scenario.