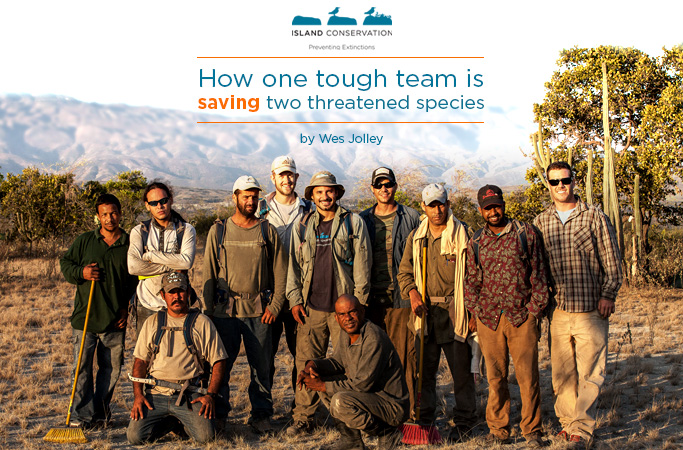 I don’t want to brag, but I’m going to for just a minute: One of the best parts of my job is that I get to travel to some of the most remarkable islands in the world where I am able to get my hands dirty in efforts to protect incredible and rare species from the threat of extinction. How can you not be excited about that?

Cabritos Island in the Dominican Republic is one of these remarkable islands, but it might not be exactly what you picture when you think ‘tropical Caribbean island’. Cabritos Island is located in Lake Enriquillo, the largest lake and the lowest terrestrial elevation in the Caribbean. The shores of the lake are about 140 feet (42 m) below sea level and the highest point on Cabritos is about 40 (12 m) feet below sea level. The ground is covered in fossilized sea life and the flora is dry tropical forest (think scorching heat and cactus instead of cool breezes and palm trees). The island is home to an array of native animal species including a variety of land and shore birds, insects, and reptiles. The primary focus of our restoration efforts are the two iguana species that call Cabritos Island home.

The Critically Endangered Ricord’s Iguana (Cyclura ricordi) and the Vulnerable Rhinoceros Iguana (Cyclura cornuta) are the only native Caribbean iguana species that live alongside each other, and it’s tough to decide which species is more impressive. The Rhinoceros Iguana is like a dinosaur, weighing up to 22 pounds (10 kg) with a huge, powerful mouth and sporting three ‘horns’ on the end of its nose. The Ricord’s Iguana, however, is like something out of a fantasy novel with its ringed tail, tiger stripes and piercing red eyes. Both species are long-lived, but the first few years of life are quite difficult as they must compete for food and shelter and avoid becoming dinner for feral cats. To protect these iguana species, the Dominican Republic’s Ministry of Environment and Natural Resources, with support from SOH Conservación and Island Conservation, is leading an international effort to restore Cabritos Island by removing invasive species, including damaging feral cats and burros.

The majority of the on-the-ground work is being done by SOH Conservación’s field team, whose members hail from the Dominican Republic. The team lives in a basic field camp on Cabritos Island for twenty consecutive days each month. The work is grueling and often requires late nights, early mornings, lots of walking, and carrying heavy loads all while keeping records and paying attention to countless small details, often in 100 degree Fahrenheit heat. These talented guys know the island like the back of their own hands, and without their positive attitudes and dedication this ambitious project would not be possible.

The team has been working on island since March and will continue to work through at least October. Three Island Conservation staff joined the team in April to provide additional training and support in preparation of entering later phases of the project. Our staff will visit the island a few more times this year and provide ongoing remote support and technical assistance. We expect to finish the project in early 2016, but monitoring efforts will continue for at least another year.

This important project would not be possible without funding from a variety of sources including: the Centre for Agriculture and Bio-sciences International, the International Iguana Foundation, The U.S. Fish and Wildlife Services Wildlife Without Borders program, the United Nations Environment Program, the United Nations Development Program and the Global Environment Facility.

You know, I look forward to being able to brag a little more in a year or two. Hopefully then, I can help to tell the stories of how these noble iguanas are thriving on Cabritos Island!