Two Guam Rail chicks hatched at the Smithsonian Conservation Biology Institute and conservationists are looking forward to the day they can be released into the wild.

Conservationists are celebrating two new Guam Rail hatchlings that were born at the Smithsonian Conservation Biology Institute (SCBI) earlier this month. The species is classified as Extinct-in-the-Wild according to the IUCN Red List, although two small populations have been released on Rota and Cocos Islands.

The species was driven to extinction in the wild due to the introduction of the invasive Brown Tree Snake, and predation by invasive feral cats is one reason some re-introduction attempts have failed. Now, with healthy populations on Rota and Cocos, conservationists are hopeful that these new chicks will be released sometime next year. Erica Royer, Bird Keeper at SCBI commented:

It is extremely rewarding to see these two chicks hatch…We worked really hard to introduce their parents to each other and to help them raise their chicks. Luckily, all of our work paid off and these two chicks will be living in the wild soon, which is our ultimate goal. 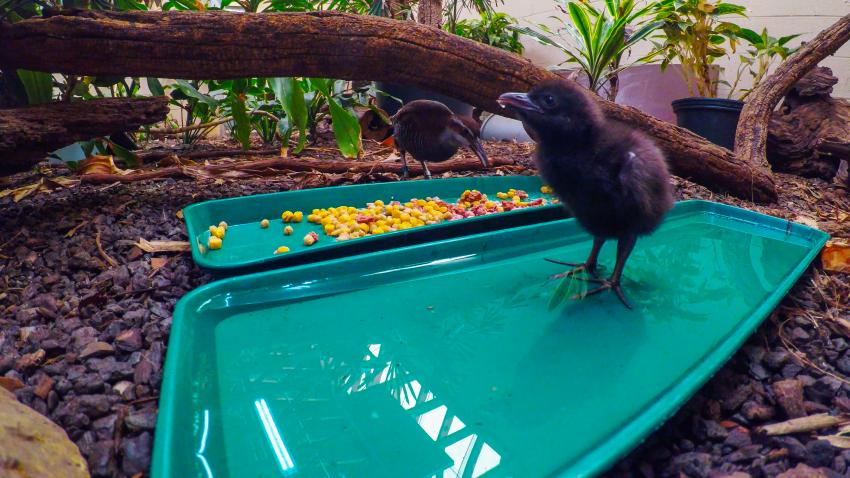 The fluffy black Guam Rail chicks were initially being fed by staff at SCBI until it was clear the parents were capable of caring for their offspring. After one month these chicks will be independent of their parents, and eventually, the two will be released into the wild populations. Rota and Coco Islands are free of the invasive Brown Tree Snake which makes for ideal habitat for the rare birds.