Australian Crows have learned how to make a meal out of the toxic invasive Cane Toad.

Crows often get a bad rap, but these birds are actually very intelligent and adaptable. Members of the family Corvidae show a capability to learn and problem-solve that is unparalleled among other birds. These clever Australian corvids have learned a new trick: how to eat poisonous Cane Toads. 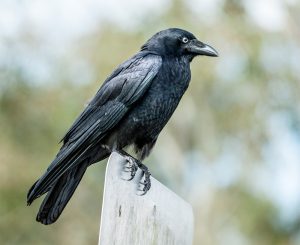 The Australian Crow (Corvus orru) has proved to be a cunning bird. Credit: James Niland

Cane Toads wouldn’t normally be found in Australian Crows’ habitat. The Cane Toad, a hardy and poisonous amphibian that will eat almost anything, is native to South and Central America but was brought to Australia in 1935 to control native beetles that were destroying sugar cane crops. Naturalists in Australia have spent decades trying to control their spread, but without success. This invasive species is thriving in Australia, because there is plenty for them to eat, and very few that can eat them. Predators such as Goannas, Quolls, and some snakes have tried to eat them, but to no avail. As a result, native animal populations have dropped significantly. But now the plot winds in a different direction, because crows have figured out how to eat these invasive toads. 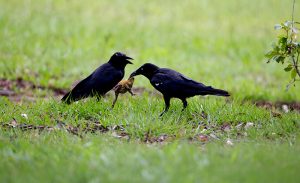 Australian Crows caught in action, being careful to avoid the poisonous parts of the Cane Toad. Credit: Steve Wilson

How do they do it? The crows have learned to avoid the most toxic part of the toad, the large parotid glands on the neck and shoulders. When the toad is threatened, milky white poison called bufotoxin oozes from these glands. Any contact with this poison results in death. According to the Global Invasive Species Database, it can kill lizards, snakes, cats, dogs, and even humans. Crows know to avoid the ooze by holding the toads by their bony brow above the eyes or by their limbs. Then they roll the toads onto their backs and eat the best pieces while avoiding contact with the lethal parts. This technique is a testament to crows’ cleverness; scientists believe that other crows watch and learn while this process is happening. This could explain why crows living 3,000 miles from Brisbane have exhibited similar behaviors.

The crows’ adaptation is fascinating and may help reduce the Cane Toad population, but this alone cannot fully remove the threat. As climate change continues, the Cane Toad’s ideal habitat range will expand. The toads could spread as far south as Sydney and all the way across to Western Australia. Still, there have been encouraging signs; many native predators’ numbers have risen after long term exposure to toads. And now that there is a reliable predator for the Cane toad, perhaps those numbers will continue to improve. We have to tip our hats to these clever birds, being the only animal in Australia so far to find a way to make a meal out of this poisonous invasive toad.