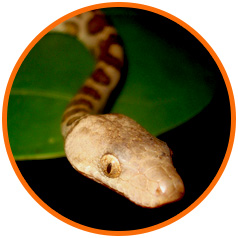 Mona Island, a 5,000 hectare island, is located in the insular Caribbean between the islands of Puerto Rico and La Hispañiola. Mona has no permanent settlements and since 1973 has been under the administration of the Puerto Rico Department of Natural and Environmental Resources.

Mona Island has been described as one of the last bastions of biodiversity within Puerto Rico. Situated midway between the islands of Puerto Rico and La Hispañiola, this 5,000 hectare (13,590-acre) limestone island remains a stronghold for numerous species unique to the island. Its isolation and limited human access have allowed a broad diversity of rare plant and animal communities to persist, literally making the island a treasure trove of biodiversity. However, a suite of invasive species present on Mona are destroying the island’s rich plant and animal species.

Island Conservation is working with the Puerto Rico Department of Natural and Environmental Resources (DNER) and US Fish and Wildlife Service (USFWS) to remove invasive species from Mona Island, Puerto Rico. A restored Mona will provide safe habitat for the island’s endemic species such as the Mona Ground Iguana, which is listed as Threatened under the US Endangered Species Act (ESA), the Mona Yellow-shouldered Blackbird (ESA Endangered), and the Mona Boa (ESA Threatened), as well as increase populations of Hawksbill Sea Turtles (ESA Endangered) and protect a significant population of Higo Chumbo Cactus (ESA Threatened). 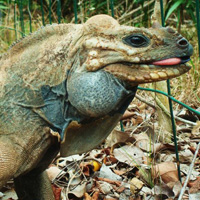 Population numbers for the Mona Ground Iguana (ESA Threatened) are estimated at around 5,000. Juveniles are scarce and represent only 5-10 percent of the population, resulting in an aging and declining population. Feral cats and pigs present on the island are the main cause of this species decline; both invasive species directly prey on young iguanas and their eggs. With considerable impacts to their nesting habitat due to pig predation, habitat modification, and, sometimes, limited availability of suitable nesting areas, it is essential that we remove invasive species from Mona to protect this threatened species from extinction. 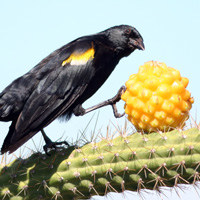 The population and range of the Yellow-shouldered Blackbird (ESA Endangered) has declined drastically since the middle of the twentieth century. This Endangered bird is currently confined to a small region in southwestern Puerto Rico and on Mona Island (where it is a unique subspecies). Due to nest predation from invasive rats on Mona, the Mona Yellow-shouldered Blackbird is further restricted to breeding only on steep, inaccessible cliffs on the island. Removal of invasive rats from Mona Island will provide much needed habitat for this endangered animal.
Photo: Alcides L. Morales 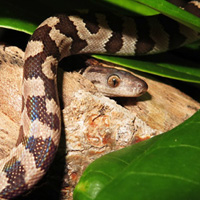 The Mona Boa (ESA Threatened) is endemic to Mona Island. Due to its nocturnal habits and retiring nature, the Mona Boa has been spared from direct human impact. However, like other boas in the Caribbean, the Mona Boa suffers from habitat modification and the impacts of invasive species, like predation by feral cats. Removal of invasive species from Mona Island will relieve the boa of this threat and provide the opportunity for recovery. 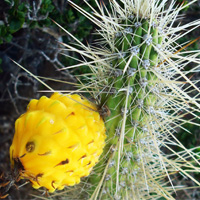 The Higo Chumbo Cactus (ESA Threatened) is found naturally on only three islands of Puerto Rico: Mona, Monito, and Desecheo, with most individual plants found on Mona. Feral goats and pigs on Mona Island eat the cactus, while the larvae of an introduced cactus moth severely damage it. A multi year project to remove invasive species from Desecheo Island is under way by IC, DNER, and USFWS to help protect the cactus. With every passing year, the Higo Chumbo Cactus numbers continue to increase. Removing invasive species from Mona Island will have a similar positive impact. 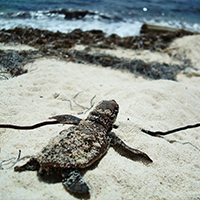 Mona Island supports the largest Hawksbill Sea Turtle (ESA Endangered) nesting ground in the Caribbean. Feral pigs on Mona dig up nests and eat eggs and hatchlings. In 1984-1985, an exclusion fence was built to protect the turtles. Prior to the fence, 44 to 100 percent of sea turtle nests were destroyed every year due to feral pigs. While the fence has improved nesting habitat, it requires maintenance, is not a permanent solution, and does not protect all nests. The removal of feral pigs from Mona Island is required to permanently protect this important Hawksbill Sea Turtle population.

All photos on this page by Cielo E. Figuerola (unless marked otherwise)

THE SOLUTION
Island Conservation, the Puerto Rico Department of Natural and Environmental Resources, and the US Fish and Wildlife Service are working together to protect Mona Island’s listed and unique plant and animal species by removing invasive species.

PROTECTED STATUS
Between 1977 and 1982, the US Fish and Wildlife Service designated Mona Island and its surrounding waters as Critical Habitat for the Yellow-shouldered Blackbird, Mona Boa, Mona Iguana, and Hawksbill Sea Turtle; Mona supports the largest population of nesting hawksbill turtles in the US Caribbean. In 1986, the island and its surrounding waters were designated a Nature Reserve, and in 2004, BirdLife International and the Sociedad Ornitológica Puertorriqueña, Inc. recognized Mona Island as an Important Bird Area. In spite of its protected status, Mona and its native inhabitants have not escaped the devastating impact of invasive species. 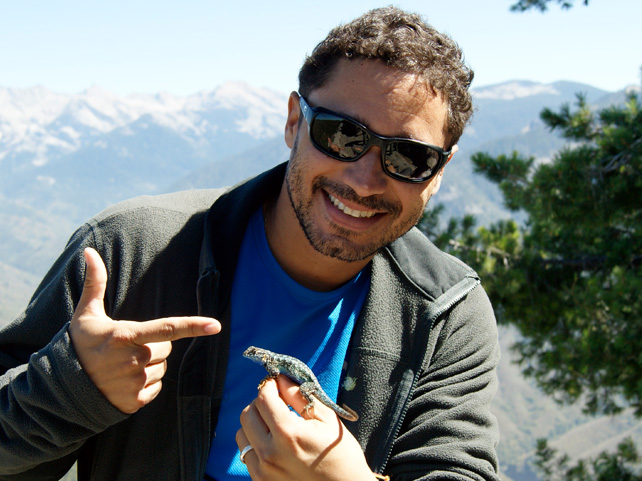 Jose Luis earned a MS in biology from the University of Puerto Rico, conducting research with the amphibians and reptiles composition in the Vieques National Wildlife Refuge at Vieques Island in Puerto Rico. Before joining IC in 2011, Jose Luis held various positions related to natural resources conservation, including working with Envirosurvey Inc, a conservation and wildlife organization based in Puerto Rico, conducting forest and wildlife assessments and outreach campaigns promoting conservation practices in partnership with state and federal governmental agencies. For two years he worked with to manage sea turtle nesting habitat and hatchlings and has conducted additional ecological work with amphibian and reptile species as a private consultant or volunteer. From 2009 to 2010, Jose Luis started working on Desecheo Island with the UCSC Conservation Measures Program, doing surveys for a single-island endemic gecko and assisting the ecosystem restoration project on Desecheo through the removal of invasive predators. At Island Conservation, he supports and leads various restoration work on islands such as Desecheo, Juan Fernández, Cabritos, Alto Velo, Antipodes and Mona for the benefits of threatened and unique species. Jose Luis is currently serving as the Point of Contact for the Island Conservation’s activities in Puerto Rico, the U.S Virgin Islands and the Dominican Republic.