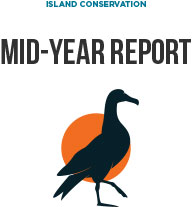 We always say that ours is a mission of hope, but what exactly does that mean? I recently received an email from one of our staff members that reminded me of the hope inherent in our work, and I’d like to share his message with you. Dr. Jonathan Plissner is currently based on Midway Atoll and has dedicated his life to working on remote islands around the world.

This past weekend Midway’s lone short-tailed albatross chick, which had disappeared from its nest site over a week ago unexpectedly reappeared on a beach across the island. A few of us trailed the young bird, still with some downy feathers, the remainder of the day as it steadily walked the beaches eastward (reminiscent of Forrest Gump’s cross-country running groupies). After resting for the night near the northeast end of the island, the bird made its way to the water early the next morning and, as a small pod of dolphins swam past, took flight across the water, leaving land behind for the next five or more years. The thrill of seeing this special bird fly off into the rising sun was amplified by raising my hopes for last year’s chick, the first-ever known to have hatched on Sand Island, which also disappeared from the nest site earlier than expected in late May. I like to think that it made a similar journey, crossing the beaches undetected before also leaving Midway behind, at least for a while. Nature has a way of reminding us that species and populations often have a remarkable capacity for resilience and fuel our hopes for recovering natural systems. Perhaps one of these birds will be the first to return to breed at Midway and be the turning point for a breeding population at the atoll. Such are the hopes that inspire me.

In a few years, this chick could be one of the first of its kind to return to a Midway, establishing a new community and hope for the future of the Short-tailed Albatross. This chick and its future offspring will be able to thrive on a predator-free Midway after Island Conservation, the U.S. Fish and Wildlife Service, and our other partners remove the invasive house mice, introduced by humans. Our staff around the world are working hard every day to continue to advance Island Conservation’s mission as they eagerly await their return to the field.

Please consider making a donation today to Island Conservation and investing in our work so that Jon and his colleagues can continue to prevent extinctions and bring us all a little more hope.

Island Restoration Specialist, Mele Khalsa, recently returned from a trip to Lehua Island to check for any signs of invasive rats, following the 2017 eradication.

“Pajaros” means birds, and as the name suggests, Pajaros Uno Island serves as critical habitat for some of Chile’s most important seabird species, including the Peruvian Boobies, Kelp Gulls, and the Humboldt Penguin.

The community of Robinson Crusoe Island pushes forward with the world’s first removal of invasive coati to save the beloved Pink-footed Shearwater and their island home.

After landing in Tahiti, it takes just a short 20-minute plane ride to experience the isolated paradise of Tetiaroa Atoll, famously known for its incredible biodiversity and as the location of The Brando Luxury Eco-Resort.