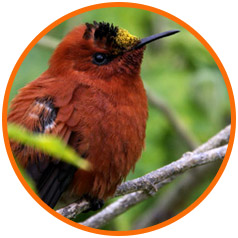 Juan Fernández National Park is located 400 miles west of Santiago, Chile. This volcanic archipelago became a national park in 1935 and a designated UNESCO Biosphere Reserve in 1977. Two of the islands—Alexander Selkirk and Robinson Crusoe—are named for the sailor and his fictional alter-ego.

The International Union for Conservation of Nature, BirdLife International, the Alliance for Zero Extinction, and the World Wildlife Fund highlight the islands of the Juan Fernández Archipelago as one of the most ecologically vulnerable ecosystems in the world. The islands are sixty-one times richer in endemic plant species per square kilometer and thirteen times greater in endemic bird richness than the Galápagos. Few people live here, largely fishermen and their families: only 700 people live on Robinson Crusoe; 30 seasonal lobster fishermen visit Alejandro Selkirk a year.

Invasive, non-native goats, rabbits, coatis, feral cats, mice, and rats present on the islands are destroying native plant and animal populations. Island Conservation and our partners are working to remove invasive species from the Juan Fernández Archipelago. Along with Chilean resource agencies, Island Conservation is conducting environmental education and community-based activities to gain local support for the restoration of these biologically important islands. 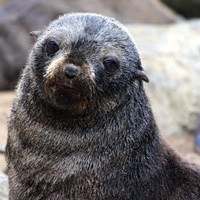 1. WHAT NATIVE WILDLIFE IS FOUND HERE? 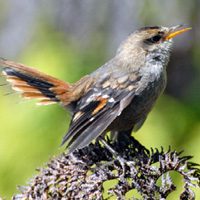 2. WHAT IS THE GOAL OF RESTORATION?

The goal is to save all of the plant and animal populations native to the Juan Fernández Islands, like the Critically Endangered Juan Fernández Firecrown and the Masafuera Rayadito, from extinction.
Photo: P. Hodum 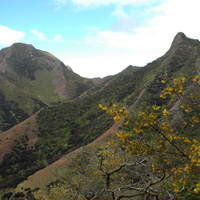 3. HOW DO YOU MEASURE RESULTS?

IC, University of California, Santa Cruz and partners monitor changes in native populations before and after removal of invasive species. Innovative techniques, such as acoustic monitoring, allow us to look at population trends and the presence or absence of native species. Targets for recovery include native plants, hummingbirds, passerines, and seabirds. 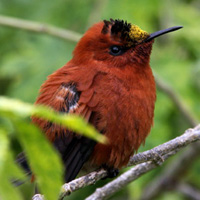 4. WHAT IS THE MOST IMPERILED BIRD ON THE JUAN FERNÁNDEZ ISLANDS? 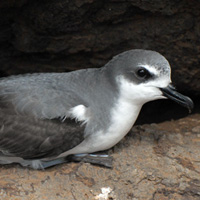 5. WILL WE SEE A RETURN OF CURRENTLY ABSENT SEABIRDS TO THE ISLANDS?

The Vulnerable De Filippi’s Petrel currently breeds on only three islands in the world: Santa Clara in the Juan Fernández Islands and two islands in Chile’s Desventuradas. It previously bred on Robinson Crusoe, but was wiped out by invasive species. By removing the invaders, IC expects the petrels’ return to Robinson Crusoe.

PROJECT MISSION
To save native animal and plant species from extinction on the Juan Fernández Islands by removing invasive species.

PROJECT VISION
The islands’ seabird and land-bird populations are stable and thriving, and native vegetation is restored.

THE PROBLEM
Invasive species devour the islands’ vegetation and directly prey on native bird species, including many found only here (endemic).

MEASURING IMPACT
By monitoring native wildlife and vegetation pre- and post-removal of invasive species, partners can track the native plants’ and animals’ recovery. 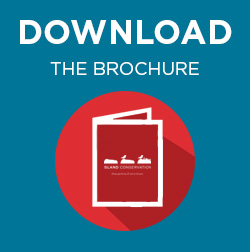 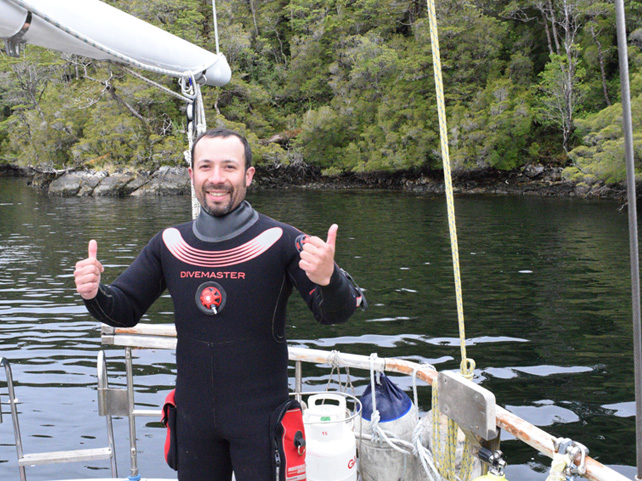 Jose Cabello is a wildlife Veterinarian and earned his Master in conservation and management of natural resources in sub-Antarctic environments.in the University of Magallanes.

Jose has a strong background in Conservation from several approaches, since he has worked in three main areas during his professional training, covering the Public, Private and academic areas. Jose worked for the government of Chile for eight years, as regional coordinator for a program to control invasive species in Patagonia directing two pioneer projects for Chile that involve control and management of invasive mammals. These projects, among other things, allowed him to develop his management skills and work with an interdisciplinary group of professionals and technicians

Jose has also been an advisor to the government and private companies in matters of conservation and control of invasive species, as well as being present in the academy teaching undergraduate courses in ecology and wildlife management.

He has directed a variety of research and advisory projects, with a strong emphasis on conflicts between humans and wildlife, and many other control programs for government and private owners with different species. All this experience gained in the fields of capture and professional hunting, government administration and research on socio-ecological systems has given him the opportunity to act as a link between decision makers, scientists and hunters and that have allowed him to better see the big picture about human conflict and wildlife.